Steve's Guide to Putting Up With Your Buddy's Girlfriend 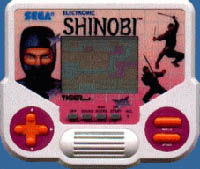 These were stupid and awesome both at once. Basically girls are like those Tiger handheld video games. You probably bought one or two when they were cool, because they cost like half as much as a real game and you didn’t even have to buy the system. But you know how the characters in the game could only be in like three different positions, and you could already see all the positions kind of outlined in grey even before you played it, so there were no surprises? That is what your friend’s girlfriend is like. She has a couple of different moods and phases, and you can already see them before they even happen, because she’s just a cheap version of a real babe. Those things were awesome though, I remember Batman Returns, it had levels where you threw a Batarang and levels where you drove the Batmobile, who cares if you could see them in grey before they happened, they were awesome.

The first phase is going to be when your buddy first meets the girl, and they have to be everywhere together always, and this is maybe when hanging out with them sucks the most hard. She is going to be always kissing on him and stuff, and when you’re over at his place they might even sneak off into the other room and do it, because the idea of doing each other is so new and awesome to them that they are going to do it all the time, without thinking about whether or not it’s appropriate. It’s like, hello, I’m right here, I’m in the other room and I basically know what you’re doing in there even if I don’t know all the details, but I don’t want to know the details, but sometimes you’re loud enough that I pretty much figure out the details on the fly, and it is one of the like top ten grossest things that’s ever happened. Maybe number seven. Here they are, the top ten grossest things that have happened to me:

10. I put my hand right on a nest of yellowjackets and one of them stung me, it could have been a lot worse though, and I guess that’s more painful than gross. But yellowjackets are gross. This is why it’s only number 10 though, they get grosser as the numbers get smaller.

9. My mom told me that when I was a baby I spit up all this brown goo on her shirt and then I put my finger in it and put my hand in my mouth. I still can’t believe I would do that!

8. In the movie Zombie 2 when the zombie pulls the girl’s eyeball into the wood shard. It was so real that it was like I was seeing it, and it’s the only fake thing to make my list, which is a monument of how awesome the movie is.

7. Like I said, it was when Keith and Sheila did it in the other room.

6. I rolled a rock over by the river and I guess I rolled it onto a salamander because when I put the rock back the result was not pretty. I still say it’s nobody’s fault but I hate that it happened and I wish I could take that back.

5. We paid this kid nobody liked to eat a piece of gum off the ground and he did it. It was so gross that I don’t even remember the kid’s name now, I put it out from my mind.

4. I heard my parents’ bed squeaking when I was like 23. I know what that means, guys, and you are too old for that to be happening.

3. This retarded girl went up in front of the class and told everyone she was going to have ten babies with me when she grew up, and it was gross even back then when I didn’t know how babies were made, but it’s even grosser now.

2. My dad came down the stairs without his clothes on and he had a pretty bad hernia at the time. Get the hell away from me with that thing, dad!

1. I bit into a chicken sandwich and there was this big hunk of gristle and I gagged on it, and it got caught up in the top of my mouth between my mouth and my nose up in my soft palate, and it hurt like hell and I kept trying to hack it up but eventually I had to just wait for it to rot up there so it would soften up, and I’m still not sure it’s all the way gone because my voice has been different since then, I swear.

So the second phase is when they are not quite as gross with each other all the time, but now they have this routine thing that they always follow. They always go to this restaurant on this day, Saturday is “date night” so don’t even think about D&D or renting movies, and now you have to arrange stuff with your bud before you can even hang out with him. You can’t just show up and go like, “what are we doing,” you have to put it through the idiot girl committee first, and I hate it. This isn’t really as bad as the gross making out phase, but it’s bad, believe me. It is really deeply bad in an emotional way. 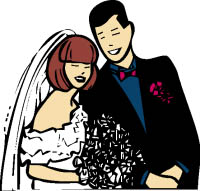 Keith did not look anything like this in a tux. His was blue anyway.The third phase is when they basically are tired of each other and they argue all the time, and whenever you go out with them or do anything with them, you have to listen to her complain about every single little thing that he does and he’s giving her this look like “not in front of Steve, you’re being a drag,” but I don’t even think girls know that it’s not appropriate to bring that stuff up in front of a dude’s friends. I don’t want to hear about how he is messy in the bathroom, I know he is messy in the bathroom, but I don’t care, and I don’t want to hear a girl yell at him about it. It’s like listening to your parents fight, except instead of being sad it is just really, really annoying.

The fourth phase is when they get married. This is the worst phase. Your buddy eventually decides that he’s never going to find anyone else, because his stupid girlfriend has brainwashed him into thinking he doesn’t deserve a babe. Who knows, maybe he’d never have a really hot babe who is a Playboy model and owns a sword shop or something, but even so, I bet he could find a really nice girl who understands him and is cool with his friends and isn’t a pain in the butt all the time. The worst part of this whole phase is when you’re the best man at his wedding, and you’re wearing a tuxedo and staring out the aisle into your best bud’s family, and they’re all kinda looking back at you with this knowing look, like “I know, dude, she is really a huge drag, but don’t say anything.” And then you look over at the bride’s side and they’re all these awful looking hillbillies and they’ve got these stupid kids with dirty hair, and you’re like “no way, is this a preview of Keith’s kids, because I’m not okay with that.”

The fifth phase is when your buddy’s wife catches Lupus and Keith comes to his damn senses after four years of this stupid crap. And that’s how you deal with your buddy’s new girlfriend.