As previously mentioned, a majority of Manga Fighter's population consists of preteens and as such, the community is as piss poor as the game itself. Every game I have reviewed for the esteemed MMO Roulette has sucked and had a horrible community. I actually mapped out a correlation that suddenly came to me while in a fevered state from the antibiotics I took after my surgery: 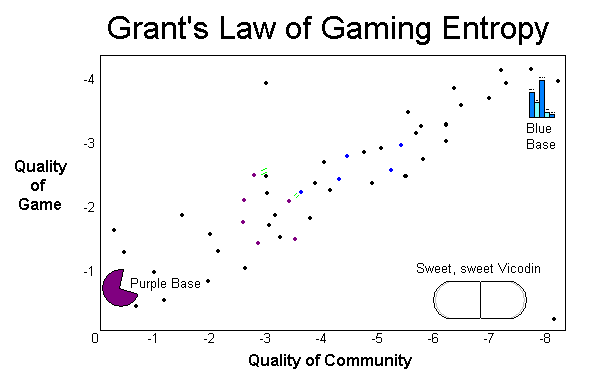 I forget which side wins.

I am pretty sure I put the numbers on the wrong corner of the graph but that is how I envisioned the chart and that is the way it stays. One thing I am correct about, however, is the fact the community is filled with some of the dumbest kids that have managed to manipulate their sticky fat chubby sausage fingers in order to get on my internet and play this horrible game. 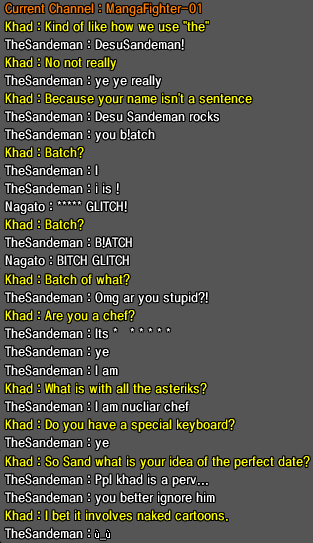 This is a chat log. Ignore it because it is dumb and not funny.Yes I realize that all kids this age are idiots and a drain on society with no actual guarantee that they will amount to anything in their lives but I don't remember being this stupid at twelve -- then again maybe that explains why I do not remember it.

Some of the more "enlightened" (dip shits) of the community have discovered simple Japanese words. Of course they don't have a clue what any of the words mean but hey that doesn't stop them from tacking "desu" or "chan" onto the end of every sentence! I kind of like the shotgun tactic as you may have already noticed I use it for my articles just hoping one of my many lame jokes makes someone laugh.

The community isn't the only reason Manga Fighter manages to suck harder than almost any game I have reviewed. It goes without saying (but I need to fill up some space so I will say it anyway) that Manga Fighter is infested with bugs. Outside of seeing through walls, missing sky boxes, and some times not being able to damage opponents, Manga Fighter makes using abilities down right impossible.

Basically, abilities are represented by cards in which you must stop what you are doing to pull out of a magical book while someone shoots you. If you manage to live because you are playing against someone with downs syndrome (or a twelve year old), the card flops out of your hand and does absolutely nothing. Perhaps I just could not master the ancient Japanese manga art of magical card tossing but it sure would have been nice if the game would have explained how to do it.