Meat: we're made of it and so are most of the things people eat. It's one of the fundamental states of matter. Most people enjoy eating meat, but there is a minority that are vegetarians. They'll eat things that come from meat like milk or eggs, but they won't eat the meat. Within this minority is an even smaller group of people called vegans that eschew all animal products. No dairy, no eggs or fish, some vegans even consider honey a no-no. Okay, that's pretty weird, but if they can get by eating that and they're happy then more power to them. 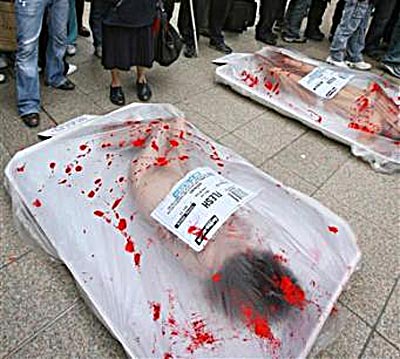 Then there are the summer vegans. These are the people who just heard about all of the amazing benefits of a vegan diet. They totally got into being a vegan a couple months ago and they feel so much better. They want you to know that being a vegan has the smallest ecological footprint of any diet. They have pamphlets about what whaling looks like from inside a whale's guts. They simply cannot believe you're putting all of those hormones in that meat into your body.

Almost inevitably, it is summer vegans and summer vegetarians who are the evangelists of the lifestyle. Any rational person can see that it's just a phase they're going through their Freshman year at Liberal Arts University, but they're not even close to rational. Even though they were wolfing down blood sausages six weeks ago now they gag when they smell someone barbecuing. They sneer with disgust at the sight of Jello and know the chemical formula for every additive in your milk.

The longer they have been a vegan or vegetarian the less likely they are to point that out and condescend to you about your barbaric diet. The relationship is so striking I have devised a scientific chart to demonstrate.

There's more to being a summer vegan than just screaming about meat being murder in mixed company. If there is an inverse quantitative relationship between time and objections to meat eating then there is a similar qualitative relationship. The less time you've been a vegan or vegetarian the more vociferously you oppose eating meat. To explain this phenomenon I have devised a simple sliding scale.

As you can see from the test, the longer you have been a vegan or vegetarian, the less offensive the parallel you draw between meat and human life. In the first hour or so of being a vegan you would likely drive over human children to save a bee. After five years, feh, eating a big juicy steak hardly matches up to taking one of those tags off a mattress.

There may not be that many summer vegans in the world, but their lack of numbers is more than made up for by the loudness of their megaphones outside Popeye's Chicken.