The 6 Most Awful Popes

Pope Benedict XVI visited the United States recently, inspiring a wave of the dreaded pope fever that sweeps across any nation that plays host to any pope. Following on the heels of the ultra-popular John Paul II, the red-shoed Benedict has been more than a little controversial. I say, cut him some slack. Benedict XVI might not be as liberal and open-minded as John Paul II. He might sound a little creepy with that Nazi Doctor accent of his. He might even look like an evil skeleton man looking for Oz. That could all be true, and he is still a pretty good pope. He actually tackled the issue of priests molesting kids. You want a bad Pope? How about a pope that molests kids, and the kids are his relatives, and he has kids with them, and those kids become popes. Benedict XVI wouldn't even make the list of the 50 Most Awful Popes and today we are only bringing you six.

Background: Julius was one of the rare duly-elected popes of the 16th century, most having come to power through intrigues or even murder. At the time, being pope was to the richest and most powerful families of Italy much like being President of the United States is to the Bushes and the Clintons. Compared to these families, Julius III was like the war hero of cardinals.

Decades before becoming pope, Julius was traded as a hostage by the dumb and cowardly Pope Clement VII to Emperor Charles V during the sacking of Rome. Julius would have been killed, but in a complicated twist Cardinal Pompeo Colonna, enemy of Clement VII and rogue commando cardinal, rescued the hostages including Julius III from the clutches of the Emperor. It was the original special ops mission. Despite such a dramatic history, Julius III would go on to become one of the vilest popes ever to sit on the throne of Saint Peter. 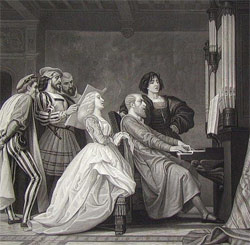 Julius III loved his music.Why He is Awful: Once he was elected pope, Julius III looted the papal coffers to renovate his mansion in Rome. The Villa Giula, as it is known, became the full-time residence of Julius III and the pope oversaw the construction. He hired only the best (including Michelangelo) and had little interest in the affairs of the pope. Following on the heels of meddlesome popes like Clement VII, you might think this was a good thing, but Julius III had some unfortunate uses for all that free time.

In addition to the wholesale looting of the Catholic treasury so that he could flip his house, Julius III was known to have a thing for younger men. Alright, he liked to have sex with kids. Okay, he was infamous for having sex with kids.

Controversial poet and scholar Giovanni Della Casa wrote an poem about Julius III in which Della Casa defended the practice of sodomizing young boys. The poem was known throughout Italy and was written while Julius III was the pope. That's like the 16th century equivalent of having a top 5 song on the Billboard charts name-dropping you as a child rapist. Joey from Full House had it easy with Alanis Morissette.

All of these things combined would easily give Julius a spot on the list, but his masterpiece of shitty popery came when Julius mixed business and pleasure. He had a tendency to appoint hot underage studs to the position of cardinal, but took things to a whole new level when he adopted a beggar. He raised the kid as a sort of foul-mouthed gay slut that hung out in Rome and was bestowed with the title of cardinal-nephew, which sounds and is creepy, but was also an extremely powerful and prestigious position in the church. Julius III and his boytoy inspired more than a century of anti-papacy sentiment throughout Europe. 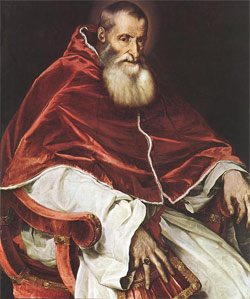 Pope casts magic missile!Background: Pope Paul III, predecessor to Julius III, reigned during a particularly turbulent time for the Catholic Church and he made some difficult decisions. His edicts against slavery in the New World were the source of a great deal of conflict and he had to grapple with entrenched corruption in the Church, the formation of the Church of England, and the agitation of Martin Luther. He ruthlessly fought Protestantism and was known for having men strangled and then burned.

Why He is Awful: Pope Paul III wasn't just a bad pope, he was a bad dude all around. He murdered relatives, including poisoning his mother and niece, to inherit the family fortune. This sort of power was what it took to muscle his way to becoming pope in the disastrous aftermath of Clement VII. The most famous anecdote about Paul III's ruthlessness revolves around a theological dispute between two cardinals and a Polish bishop. When the argument wore on, Paul III had all three men hacked to death with swords.

Paul III was also notoriously corrupt, despite his supposed anti-corruption stance. Any position in the church was for sale and he famously took control of some 45,000 Roman prostitutes and then took a cut of their earnings. That's right, Paul III, the world's first pimp pope. Paul III's most well-known lover was an attractive young lady named Costanza Farnese.

She was the pope's daughter.