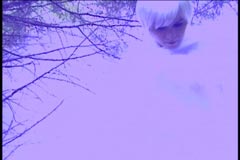 I know where this is going, and it's not a happy place.Now, we've already got a plot featuring three hitmen tracking a runaway porn star who accidentally absconded with discs containing secret documents about a terrorist plot to steal an experimental bomb from the U.S. government - oh yeah, Thomas is a terrorist, did I forget to mention that? - so you think that would be enough for one movie. A lesser director of terrible movies might stop there, but not John Specht. John Specht is a man who likes to push the envelope. Why should he settle for doing a shitty job with one plot, when he can just as easily do a shitty job with two? In the spirit of adventure, Specht shoves another plotline in there. Are you ready for this? Okay, here we go.

An angel decides that it is tired of waiting for Armageddon, so it goes down to Earth. You see, angels have the ability to take the form of humans, and in doing so, expose themselves to the full array of human emotions and sensations to which angels are otherwise immune, as well as gaining all the memories and skills of the person they emulate. The catch is, they can't just make themselves into any human. It has to be a recently deceased human. The second catch - and this is one that the angel fails to mention in its endless monotone narration - is that they don't possess the body of the recently deceased person, they just copy it. So they see someone drop dead, and before the wormfood-to-be can even finish voiding his or her bowels, the angel has already copied the person's form and memories and started walking around. I know psychiatry is heathen science and all, but come on, angels, that can't be healthy for the deceased's family.

In this case, our curious angel friend takes on the form of Nora, who has conveniently OD'd on cocaine when she was supposed to be getting gang-banged on set. Having duplicated Nora's body and shoved the decaying original in a closet, the angel is free to roam the Earth in search of sensations both physical and emotional. But she doesn't. Instead, she just goes ahead with what Nora would have done if she was still alive, namely, go into hiding because she's afraid the information on the CDs she stole is going to get her killed.

The angel - posing as Nora - flees for a safehouse with Rex, a portly porno stagehand played by John Specht himself. Little do they know that Nolan, Dmitri, and Trent are hot on their tail. Except that they totally know it. Just because the angel has taken human form, with all of its frailties and shortcomings, that doesn't mean she's given up her supernatural powers. I mean, yeah, you'd think it would, but it doesn't. Still, even with the angel using her crazy Christian (read: Jedi) precognition, one might think that having vastly superior weaponry, near-perfect cover in the darkness, and years of working as a squad would give Nolan and the boys a little bit of an edge. Instead, they get their asses kicked. Although all three hitmen make it out alive, only Trent, that lucky bastard, gets away without his share of bullet wounds.


Still, they got what they came for, Thomas's precious CDs. When they return the discs to Thomas, he explains his plot to ship a stolen army prototype bomb to Germany for some reason or another. What he does not explain, however, is why he needed the discs. In fact, all evidence seems to suggest that he actually didn't need the discs. At best, he just needed the information they contained, which is somewhat irritating considering earlier in the movie a guy approached Thomas with a hard copy of the documents contained on the discs and Thomas threatened to kill him.

Suddenly, Dmitri has a change of heart and decides he can't do business with terrorists. A shootout ensues, in which Nolan dies, but Thomas escapes unharmed. These hitmen have got to be the worst shots in the world. The twist, of course, is that Dmitri isn't really Dmitri. He actually died during the raid on the safehouse, and the angel just copied his body. According to her incessant narration, killing Thomas and everyone else even remotely associated with him is part of her mission on Earth. Allow me to state for the record that there is no mission. This is utter crap. Still, it doesn't prevent the angel from going on a totally pointless killing spree, working her way up the ladder of an inept crime syndicate in order to stop Thomas's plot, talking about her nonexistent mission every ten seconds until spending an eternity in hell begins to sound like a pretty good option. Granted, none of the people she kills have anything to do with Thomas's plot, but that doesn't seem to bother her. 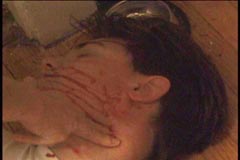 Don't get me wrong, I'm glad to see Trent dead, but still...Eventually, having killed pretty much everybody else in the movie, the angel goes after Trent, who, despite clearly being retarded, has managed to not die quite yet. Taking the form of another assassin, the angel gets into Trent's house. By this time, she has killed enough high level criminals to have amassed a sizable arsenal of knives, handguns, and rifles of all shapes and sizes. So how does she kill Trent? Does she silently slit his throat? Blow his head off from half a mile out? Maybe roast him alive with her super angel powers, putting a nicely dramatic conclusion on her killing spree? Nah, she distracts him by offering him some coke, and while he's cutting himself a line, she bashes him on the back of the head with a frying pan she found. To add insult to injury, this blow to the back of his head somehow causes the front of his head, and only the front of his head, to become bloody. To add even more insult to injury, this is the last scene in the movie.

I've done a pretty lousy job trying to describe this movie, but to be fair, John Specht and co. did a pretty lousy job making it. How did Thomas know Nora had the CDs? How did the hitmen know where the safehouse was? Why would the angel bother going to the safehouse in the first place? Why the hell do Nolan and Dmitri keep bringing Trent along when he clearly sucks? Why would the angel kill Trent with a fortunately placed frying pan when she has access to any number of more effective weapons? Why did this movie ever get made? These are just a few of the many, many questions raised by the portion of the film I could summon the wherewithal to write about. The rest hurts my brain, but here's a little taste: in one scene the angel takes some time to talk with another angel in a roadside diner while Rex presumably waits in the car. In another, the hitmen try to cover up for a murder by accosting random people on the street and telling them about it. You get the idea?


I always enjoy examining a filmmaker's earlier work to see how it influenced their later pieces, and Absolution did not disappoint, in the sense that it disappointed on every level. It's easy to see where Electric Zombies came from; the endless, mind-numbing scenes full of people shouting over one another while trying to remember what their character wants, the shaky camera and terrible sound, the refusal to let the audience in on the plot until the final twenty minutes of the movie, the totally nonsensical story and unlikeable characters - all of these are prominent features in Electric Zombies, but they basically define Absolution.

To be fair to my good friend Jonas Moses, who, while he may not be able to hold onto an accent for more than a few seconds at a time, at least manages to carry himself with dignity throughout this steaming load of a movie, I understand that it can be difficult to make an quality film on a shoestring budget. I realize that time and money restraints often mean that scenes have to be changed or cut at the last minute, so that the final product is often far different from what the creators had in mind when filming began. Indeed, I sympathize with the legions of young filmmakers out there who can't resist the camera's siren song despite lacking the funds, support, or talent necessary to bring their vision to life. But man, there is a fucking limit.