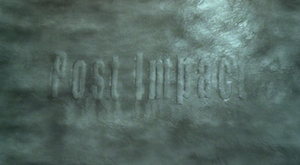 Overview: After a comet blows up most of Europe and plunges the world into a new ice age, a completely different movie about a madman with a satellite weapon trying to blow up a major city starts up. And Dean Cain is there, too.

The Case For: The promised Impact happens in the first ten minutes, so at least the title doesn't blueball you for the entire picture like some other movies we could mention.

The Case Against: On the other hand, the obligatory female nudity and awkward sex scene doesn't happen until like half an hour in, which is an amateur mistake. Front-loading the boobs to lure unsuspecting viewers into your dungeon of cinematic horrors is shitty moviemaking 101. 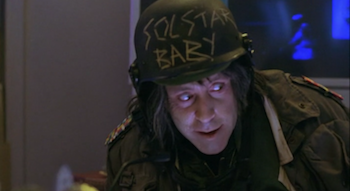 Post Impact takes us back to the painfully familiar ground of a global ice age apocalypse riddled with glaring factual errors and no sense of reality whatsoever. There are the expected basic science fuck-ups like people strolling around outside in minus 60 degree weather thanks to their down jackets, or the titular impact involving a comet caroming off a random asteroid right next to Earth like the whole solar system is just a cosmic game of billiards. But P.I.[1] didn't want to settle for just not understanding cold or comets, and so we have people being knocked out by a light tap to the shoulder blades and man of action Dean Cain getting shot in the gut twice and reacting by developing a light cough and nothing else.

Somehow, the worst part of all of the above is that unlike Absolute Zero, which was exuberantly over-the-top with its flying palm trees and -460 degree weather in Miami, P.I. is insane in a cautiously boring way. We're not saying that Absolute Zero was the pinnacle of surprise ice age cinema or even watchable in any way, but if you're going to go full retard in your sci-fi disaster movie, the least you can do is embrace the madness. Actually, on second thought, maybe don't tell any of your direct-to-DVD bargain bin acteurs to "embrace the madness", or else this will probably happen:

Our favorite part of that little soliloquy is that he went so full-ham on that performance that somehow, his character named "Klaus" suddenly developed an Irish accent (not that anybody seems to notice or care.)

On the other hand, we can sort of understand why the director might have felt the need to trot out a screaming rodeo leprechaun in the final act, because up until this point the whole Post Impact scenario has been just painfully, terminally boring. There's a solid hour of a crack team of soldiers driving into a disaster area in high-tech military trucks, eventually plunging into a maze of tunnels where they happen to find a mute little girl who, against all odds, has survived the disaster and can guide them to safety. And yes, that is the exact plot of noted good movie Aliens, but somehow stealing it wholesale didn't make Post Impact a good movie. Maybe it's because instead of the looming threat of an army of unfathomable alien killing machines, there's just some guys in filthy coats with AK-47s who literally can't aim to save their lives? That certainly doesn't help.

Our reward for sitting through all of the tedium is maybe the worst ending we've ever seen (okay, second worst.) See, one of Dean's big motivations was that his wife and daughter were left behind in the ruins of Berlin, and he's been searching for them the whole movie. After the world is safe, he decides to drop by his old house, where he proceeds to find...their frozen corpses. Wow, that really makes us think...about how stapling an existential, nihilist waking nightmare onto the end of your shitty sci-fi action B-movie doesn't actually turn it into a philosophical thinkpiece. Nice try, though.

[1] We're using the acronym version of the title, in honor of this movie's bizarre love of pointless acronyms. The comet institute or whatever is called N.L.O.S.I., whatever the fuck that means, and after Europe is blown up by a comet, the traumatized U.S.A. decides to become the New United Northern States, or N.U.N.S., a name which can only have come from a national write-in contest for the worst possible name for a country.