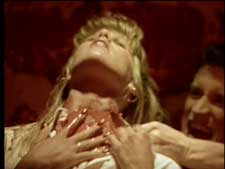 Come on, Dean, no one needs that much foundation, and you know it!After the maze, the group is split up into a few smaller groups. The first group moves into a room where the excited little employee pulls a carefully planted female employee out of the crowd and fakes slitting her throat with a prop scalpel. Dean walks in after the crowd leaves and says that he's going to show the kid how to do it. When the next group comes through, Dean shows off his horror chops by overacting like a motherfucker. He gets fake blood, by which I mean Revlon Liquid Foundation, all over the next carefully planted female employee.

Out in the courtyard, an employee runs through the crowd waving a chainsaw. They basically ignore him and keep moving. Once they're gone, Chris appears, responding to a call that the backup chainsaw is broken. The chainsaw kid tells him that it's working, but he can't get the blood off it. Maybe I don't understand the biz, but it seems to me that having blood on the chainsaw would be a good thing, since it would look like it had been used to chop up somebody. And in any case, if it's still working, is this really a problem that the haunted house's best tech guy really needs to deal with while groups are still coming through? Gah! Nuts to this movie!

One of the groups of haunted-house-goers has a run-in with the Random Killer as he grabs the black Rowdy Teen and hangs him from a makeshift noose. The crowd doesn't try to stop this at all, just like the loser in the beginning of the movie predicted! What foreshadowing! It's really not surprising that they think this is just part of the house, since there is nothing else happening in this room. Yep, the guided path takes them through a room where there would have been nothing even remotely scary to see at all if a random killer hadn't happened through just then. That's quality, right there. Of course, it does sort of violate the whole "actors won't touch you if you don't touch them thing," but as far as the group knows, that's already been broken. I mean, it's not like anyone in the group saw that black kid outside or anything and would have any idea that he's really a customer and not an employee. Oh wait, I accidentally wrote "not like anyone." I meant to say "exactly like everyone." Whoopsie.

If you can't tell what's going on in this picture, consider yourself lucky. I know, and now I can't sleep.

The Random Killer then goes off to kill some more. Since he's already killed two people, George Demick can't manage to feed him any more victims without introducing two completely new people. A fat bitch is humping some loser in a horror mask on the floor of some back room. Presumably they're employees, since otherwise they'd have no way of getting in there. In any event, we've never seen them before, nor would we want to. The woman moans the exact same way over and over again. I wouldn't be surprised to find the actual sound is just repeated. That's certainly a problem in this movie. Anyway, she moans like a whore despite the fact that we can clearly see she's wearing underwear, so all she's really doing by riding the poor bastard underneath her is crushing his 'nads under her buffalo-like girth. Luckily, the Random Killer puts the guy out of his misery by bashing him in the head with a pipe, then he kills the girl with a drill, which we again see by cutting away to a wall and seeing an occasional splatter of cheap blood capsule.

Part of the tour, including the two mutants, wanders into a room where some of the employees are recreating a scene from "Night of the Living Dead." When the group leaves, Blindie stays behind. A zombie actor actually comes up to her as if he's going to start gnawing on her, which doesn't make any sense whatsoever, since the scene in that room is already over. Luckily for her, the Random Killer grabs the zombie from behind and takes him off for a lengthy, inefficient killing somewhere else. Way to save the day, Killer! Sasquatch comes back into the room and leads Blindie out, chastising her for staying behind and all of her other silly blind ways. She's also ugly. 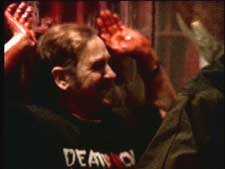 Oh no, Chris! I loved you best of all.

The Black Pervert manages to get completely separated from the rest of the group. Despite the devil guy's instruction to just keeping going even if you get separated, the Black Pervert decides it would be a good idea to stop and start rummaging around in some of the open cells that the employees use for storage. He finds a Michael Myers mask and starts to put it on. Before he gets it over his face, the Random Killer comes up behind him and slits his throat. Let's see, that's two black people introduced in the movie, and two black people down. Nice work, George Demick! The killer also decides to switch from the crappy old Jason mask to the new and exciting Michael Myers mask, which of course increases his powers a thousandfold. Or something. Shut up. Chris finds him, but figures out what is going on too late to do anything about it before getting stabbed. He tries to make some walkie talkie communication with Dean, but before he can say anything, the Random Killer stabs him like fifty more times. Seriously, Chris just won't go down. He also has no reaction whatsoever to the individual stabs. It's only when stabbed en masse that he even decides he's dying already.

Dean hears someone trying to get his attention on the walkie talkie, but when he responds, there's no one there. He decides to take Lisa and look for Chris. Meanwhile, a woman wanders into an abandoned room. She calls around for people, but no one answers. So what does she do? Just what you or I would do if we got separated from a haunted house tour group - she handcuffs herself to the ceiling! I'm serious, here. There are a couple pairs of handcuffs hanging from the ceiling, and she decides to latch herself right on in. She has some trouble getting that last cuff closed, but luckily, some large, taciturn stranger is willing to help. Oh no, it turns out it's the Random Killer! He has found one of the chainsaws apparently, and wouldn't you know it, he uses it to kill the woman! Oh if only she hadn't handcuffed herself to the ceiling in the presence of a giant psycho. In other words, if only she wasn't fucking retarded. 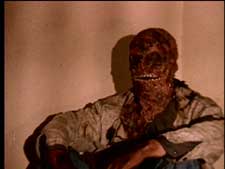 Hey look, the Mummy returned! As a bum!

The Random Killer keeps on walking, but as he passes by an open cell, someone calls to him. He turns to see... some guy. The guy is another criminal, and they seem to know each other. Most of the dialogue is swallowed by the crappy sound here, so it's tough to tell what's happening. Every so often, the new guy is replaced by a vision of himself but horribly burned. That is to say, wearing a paper bag that someone drew burn wounds on. The image snaps back and forth, so it's tough to say which is the real guy and which is just the killer hallucinating. My guess would be that they were inmates together in this prison before the fire and well before it was converted into a haunted house, and that this guy was killed in the fire. That would make him seem like a delusion. Okay, I can deal with that. The guy gets into an argument with the killer over whether or not Freddy Krueger is the best movie serial killer. I swear the killer argues that he isn't because Freddy was a child molester. That's the best I can make out from the mangled sound. In any event, the Random Killer is so adamant about this point that he douses the guy in gas and lights him on fire. When he burns, the guy stays in his normal form, rather than his burnt form, which would seem to indicate (1) that the guy is real and (2), that his healthy form is his real form, which makes the burnt form completely pointless. I'm not sure what this scene is all about. I guess George Demick is trying to give the killer, of all people, a backstory. Or maybe he's just reaching to find another victim for the killer to knock off. Whatever the case, it has no effect on anything else and I hate this movie. 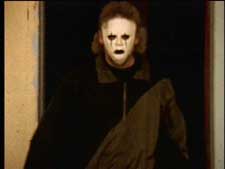 Sure, he's a homicidal maniac, but just look at that stylish jogging suit!

Another employee bumps into the Random Killer. This one has a mask from "The Crow" and an icepick. The Random Killer takes both objects from him. We cut to the killer walking away in a shiny new Crow mask, icepick in hand. Call me crazy, but I'm willing to go out on a limb and say he killed the employee! Hoo boy! Nutty stuff! Elsewhere, a group of customers continue to make their way through the prison. Some stupid chick in a clown costume - yes, a clown costume - stands outside an open cell, asking passers-by if they would like to look inside. Everyone refuses, except for the last guy in line. Naturally, as soon as he's inside, the clown girl closes the door and locks it behind him. Uh... duh. That's what he gets for trusting an annoying girl in a clown suit. Unfortunately for them both, the Random Killer happens by with his new Crow mask and gives the clown girl a firm icepicking. The guy in the cell curls into a little ball of bravery and sucks on his thumb of courage, but the killer just leaves him alone.

Makeout Guy and Makeout Girl from the beginning have joined up again and are making their way through the prison. The Random Killer grabs the guy from behind and kills him to death. He then stabs Makeout Girl in the shoulder, but she gets away. She goes running for help, but everyone thinks she's just part of the act, even though she was with them on the tour all of thirty seconds ago and the fact that she's bleeding from the shoulder. She runs away as the Random Killer approaches, and the crowd just lets him right on through. He chases the girl out onto a catwalk, where he catches her and stabs her with the icepick a couple hundred times, as is his wont. My wont is for this movie to end immediately, but sadly, we don't always get what we wont... uh, want.