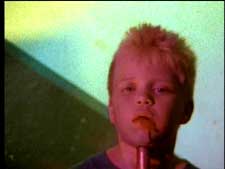 Die, you spiky-headed bastard! Die!Thankfully, things finally start going my way. The next pair with the bad luck to run into the killer are the two bratty kids. As usual, they're just walking around shouting about how tough they are. When they walk right into the killer, they are sure to inform him that they are tougher than him, too. The killer has a difference of opinion, and he hurls the little blonde kid over the side of a flight of stairs. God bless you, Random Killer! Truly, you have done the world a great service! The fat, doughy kid stars pounding weakly against the killer's side with the bakery fresh Pillsbury biscuits he calls fists. Now, Random Killer, just polish off the buttery lardchild, and all glory shall be yours. But alas, his kid killing is interrupted by another employee who comes barrelling up the stairs and sees the dead body of the blonde kid. As soon as he reaches the top of the stairs, ready to dispense some justice - Nameless Extra-style! - the Random Killer hurls him over the stairs as well. The fat kid uses this as his opportunity to make his fat escape. He runs into Dean and Lisa and tells them that a killer is right behind him. Dean and Lisa pause for a moment to see what they're up against, then decide they're screwed and run for it. Now despite there being only one way to possibly make any sort of escape, when Dean and Lisa start running, the fat kid is nowhere to be seen. Damn his fat magic! 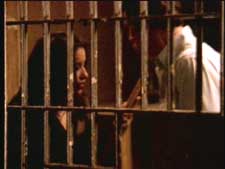 Dean and Lisa make a run for it, but the Random Killer is never far behind. Lisa wants to stop and fight, since they outnumber their enemy, but Dean refuses, since they are unarmed and the Random Killer has the icepick. They lock themselves in a cell, hoping that the killer will get tired or trying to kill them through the bars and go away. That's exactly what happens, naturally. Before they head out again, Lisa breaks a metal leg off of the bed in the cell. It's nice to know that this prison was built with easy-break furniture so the inmates could defend themselves against the constant shankings and bed-leg fights. As for Dean, he says that he has a pocketknife on him after all. When he produces it, it turns out that he's talking about a blade that looks like it could be four or five inches long. Pick a random part of you body. Go ahead. Point to it. Got it? Okay, now imagine a piece of metal stabbing four or five inches deep into that body part, and then tell me that Dean was fucking unarmed this whole time. What the hell is wrong with this guy? That knife is bigger than the freaking icepick.

As soon as they dare to foray out of the cell again, the Random Killer leaps out from behind a corner and stabs Dean. Well, obviously. Anyone who didn't see that one coming should be forced to watch this godawful movie over and over again for twenty-four hours or until their eyes shrivel into little eye-raisins and their ears bleed, whichever comes first. Unlike everyone else in the entire movie, Dean drops after being stabbed a pathetic one time. What a sissy. The Random Killer chases Lisa into some room with crazy writing on the wall. After beating her to death (the bed-leg! It does nothing!), the Random Killer cannot help but remove his Crow mask and stare in wonder at the writing on the wall. And why not? After all, that... uh... doesn't make any sense at all. But who's to say what makes sense in this crazy, mixed-up world? Oh right, me. 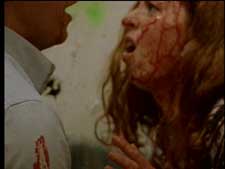 While the Random Killer is catching up on some light reading, Dean gets back to his feet. That's right, one stab really didn't stop him! He only dropped because he really hated Lisa and wanted the killer to get her. Well, either that or because he's a puss. In any event, he gets his knife ready as he hears footsteps coming closer. He puts his back up against the wall, and as the interloper comes around the corner, he stabs! But oh no! It's not the Random Killer! It's Makeout Girl! That's right, getting stabbed a couple hundred times didn't kill her, it just kept her down for a few minutes. I swear to God, the Random Killer is the only person in the world who can stab someone that many times without ever hitting something vital. What a loon, that guy. Unfortunately, Dean has much better aim and hits something vital on his first shot, killing Makeout Girl for good. And then, being the sensitive guy that he is, Dean leaves the knife behind... and still in Makeout Girl. That's right, he just leaves the knife sticking out of her. What a guy. Instead, he picks up a new weapon - Lisa's dropped bed-leg, which is now back in the hall for some reason. 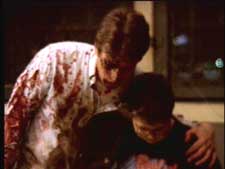 Dean finds the Random Killer and attacks him with the bed-leg, but he sucks at this and the killer beats the holy hell out of him. Dean scrambles up a ladder to the roof, and the killer follows after, shouting crap like, "This is my movie!" Remember, he's influenced by horror movies, and... well... George Demick is an idiot. The killer throws Dean off the roof, but he survives and crawls back inside, where he finds one of the chainsaws waiting for him. What luck! The killer gets down there with incredible (read: impossible) speed, and Dean can't get the chainsaw to start. The killer starts beating him up, but the little fat kid comes in from behind, picks up a knife that happens to be laying on the ground, and stabs the killer in the shoulder! Yay for the knife! Boo for the little fat kid! The killer turns his attention to the fat kid, but that gives Dean enough time to get the chainsaw going. Well, actually, the crappy sound edit makes it so suddenly the chainsaw is already going full steam, without us ever hearing Dean starting it. In any event, the killer turns at the sound of the chainsaw and gets a chainsaw to the face. He dies from this. Leaning on the little fat kid for support, Dean hobbles away. And with that, "Asylum of Terror" ends. Yep, it just ends. Does anyone let that guy out of the clown's cell? How do the people react to finding their friends and children have died? What happened to the mutants, or the White Pervert, or the loser who likes to go in haunted houses on his own? The world may never know. Luckily, the world also will never care.

To call this movie bad is severely overtaxing the capacities of the word "bad." This is a monstrosity, an affront to everything that low-budget filmmaking can be. "Asylum of Terror" was clearly made for a nearly nonexistent budget, but that doesn't excuse the complete crappiness of every aspect of the production. There is no lighting to speak of in any scene, only whatever natural light happens to be in the shot. The sound is beyond pathetic. It would be bad enough if it was just that the dialogue is either too soft to hear or so loud is clips, but the sound effects are also horrible and frequently pieces of lines or parts of screams are repeated when a shot changes. The camera work is frequently shaky, and when it isn't, it's just lame. The actors, if you want to call them that, are terrible down to the last of them. The few attempts at effects all fail because either the sound doesn't match up or the blood is just too fake-looking to be taken seriously. The script doesn't include anything that could be considered character development or story arc. Things just happen to people. The killer is there for no reason, he happens to be stopped by coincidence. The audience has no particular sympathy for either the killer or the victims. You don't want the killer to get away with it - he's too irritating. But you don't particularly want the characters to get out of this, either, because then the movie is just a complete waste of time. You just sit through the movie wondering if maybe you can adjust your speakers somehow so that all of the high-pitched screaming doesn't clip quite so badly. Frequently, new characters are introduced because, despite a huge cast, George Demick can't think of a way to kill anyone he has already introduced. As Dean and Lisa wander the halls of the prison, they stumble upon heaps of bodies from killings we never saw, which is totally unnecessary. This movie is a failure on every level I can think of. And all that in just seventy-five minutes. Way to go.