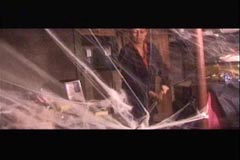 Hey, that shit's sticky. Don't act like it isn't.Avia's on a roll, now. She kills two slow-moving vampire women in what appears to be her own back yard. Then she breaks into another house and makes her way toward the basement. Vampires always hide out in their own basements and/or attics, you know. This particular basement is covered in fake spider webs, the kind that people toss on their bushes around Halloween. Avia swipes her sword at the webs like a master hunter clearing away brush& and gets horribly tangled. Yep, her sword, which can cut through vampires with a single stroke, can't seems to quite cut through the webs. One might think that this would be a good time to cut away, so as to maintain the illusion, but that's not Leon Hunter's style. He actually makes a montage out of Avia trying to get her sword out of the webs while still looking poised. You have to hand it to the man. He may not know what he's doing, but damn it all if he doesn't do it with confidence.

Finally freeing her sword, Avia moves on through the vampire's basement - I mean, lair, doing her best to ignore the box of X-Men Fruit Snacks sitting out on the table beside her. Suddenly, Fatty Vampire, Butcher of Cardplayers, appears from the darkness! He knocks the sword from Avia's hand, but she deftly retrieves it, and then, holding both ends of the sword, loops her arms around the vicious Fatty and gives him a great big sword hug, splitting him in two.

When Avia goes home, Guy is waiting for her. He notices blood on her shirt and worries that she's been out killing innocent people. Of course, the joke is on him. There's no blood on her shirt. In fact, there's really no blood in this movie. Never mind that she killed a family of four and pulled her sword through a fat guy, both she and the sword are totally spotless. Nevertheless, Guy prepares to arrest her for her supposed crimes, but instead they both just curl up for a nap together. At this point, even I don't know if I'm serious or not.

During her nap, Avia has a dream of a graveyard. When she wakes, she knows just how to find the head vampire - and before you ask, no, it's not in a graveyard. Guy tries to stop her, telling her he knows about her history of mental instability, but she casually punches him out and takes off. She's a woman on a mission, dammit.

Itching for vengeance, Avia takes a cab to what looks like a bed & breakfast. I imagine it's supposed to be a looming mansion, but the employee haplessly wandering through the establishing shot kind of ruins the mystique. She instinctively knows to head upstairs, where she finds the shirtless Head Vampire and his lesser vampire cronies. The dumber, weaker vampires try to kill Avia by slowly walking at her, but oh ho! She's too clever for them! More vampires rise to stop her, and actually succeed in getting her sword away from her. Still, she fends them off, and slices them to bits when the sword magically reappears in her hands. 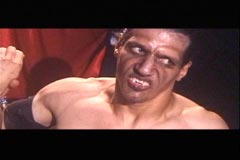 This actor's name is Antonio Tomahawk. He has been in twelve movies. The world is a scary place.At last, it's just her and the Head Vampire, and this time, she's not the only one who's armed! That's right, the Head Vampire unveils his secret weapon - a rake strapped to his hand! At last, it all makes sense! Alternately, at last, I've gone insane! Unfortunately for the Head Vampire, his hand-rake is not enough, and Avia dispatches him with one clean stab through the midsection. I'm not going to comment on how sad it is that they actually use the "tuck the sword under your arm to make it look like it's sticking through your chest" trick. Wait, yes I am. It is sad. Very, very sad.

The next thing we see is Avia and Guy sitting on a park bench, laughing merrily. Avia gives a voice over to bring this terrifying tale to an end:

"Maybe I'm crazy. Maybe I'm killing innocent people. But the fact is that I am Avia, Vampire Hunter, and I will not stop until all vampires are dead."

Wait, what? Did she actually just admit that not only is it possible that she's been murdering innocent people all this time, but that she plans on continuing regardless? And Guy is okay with this? What the hell sort of ending is that? Where's the "At last, my family is avenged?" Where's the, "Finally, I can rest?" All we get is, "Eh, maybe I've been killing innocent people, maybe I haven't. My cop boyfriend doesn't seem to care, and killing is fun, so I'm going to keep doing it." What the hell is that? Goddamn you, Leon Hunter!

Trying to delve into all the ways in which this movie fails in any sort of satisfying manner would be an exercise in futility. It would be quicker to list the things this movie does right. Here I go:

1. Leon Hunter put his name in the credits nine times and didn't spell it wrong once.

That's all I've got. Maybe Leon Hunter has some great talent, but after seeing him try to write, direct, produce, edit, and choreograph fights, I can safely say that it has nothing to do with film. The man needs to take a hint and get as far away from the movie business as possible. This movie sucks so much, it has actually transcended the bounds of three-dimensional sucking. It metasucks. It quantum-sucks.

You know who the real victim of this movie is? I mean, besides my poor, undeserving eyeballs? The London Philharmonic. Those guys are all class. It takes a special type of jackass to ruin the music of the London Philharmonic, but Leon Hunter is just that type of jackass. I mean, this movie used genuine orchestral music, and I'm still going to have to give it a terrible score for sound. Part of that comes from the godawful sound quality for most of the dialogue and sound effects in this movie, but part of that is definitely the fact that Leon Hunter has ruined what should be beautiful music. The other terrible scores will be because this movie blew.