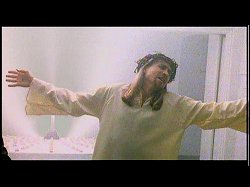 "Dude, I was hanging like this all day! Totally gave me a crick in my neck! Got any weed?"After the meal the phone rings and Maia answers, unimpressed at the ability of the government to keep all public services in operation despite the imminent extinction of mankind. A strange man on the other end tells her to meet him at 8:00 that night to learn where her sister Zorro is. This is because Zorro has apparently gone missing, something not particularly touched upon until this point. Maia takes the gassed-up car to the meeting spot, where she looks around nervously before a sledgehammer shatters her windshield in super slo-mo and gas-masked goons attempt to drag her away into a van. Before they can succeed, Olly appears out of nowhere and frightens the goons off, and as he comforts the battered and bruised Maia, the two exchange meaningful glances between 900 alternating camera views, then kiss as the frame twists sideways and desaturates and does whatever tricks the director learned in his film classes at ITT Tech.

After Maia and Olly return back to the apartment, Maia tells Robert that she kissed another man. Robert, like all small insecure men, immediately takes this small admission to its logical conclusion and starts berating Maia for having sex with him. "How can you fall in love now, in the middle of all that's happening?!" he shouts. Maia starts crying and screams back, "why are you talking to me like Kindergarten Cop?" Apparently this was the most dramatic example the director could think to reference, which explains a lot, really. Soon Maia is demanding to know what designed food is made of. Robert screws up his pint-sized face and finally admits that, yes, it's made of people, in a twist that only the least astute first grader didn't see coming thirty minutes ago. Maia freaks out and so Robert decides to go confront his uncle to get the truth about this mystery man-meat being doled out on the unsuspecting populace. His uncle promptly fires him and has security drag him out of the office, while an impotently enraged Robert screams "you bloody damn monster!" over and over. The fact that he has no trace of an English accent makes the line that much more lame, which is hard to do.

After Robert returns, Maia and a few others decide to infiltrate the factory for reasons which are never really defined, and after wandering around in dark brick hallways for ages Maia finally stumbles across Zorro, who has been employed to chop up cadavers in a back room. Maia tries to get her to leave, but Zorro refuses. "What's so wrong with being an animal?" she cries. "What if the world doesn't explode? I don't want to starve, I want to survive no matter what!" Determined not to let her little sister survive, Maia grabs her and they all run out of the factory with more gas masked goons in hot pursuit. Zorro seems especially concerned that they had to kill the men chasing them, probably because she was worried that their carcasses wouldn't have the chance to be properly reprocessed. Hey, it's just common sense. 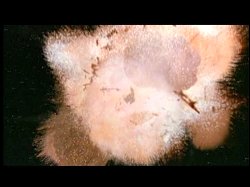 There goes the neighborhood. Well, all neighborhoods, technically.Once back at the apartment again, they receive a phone call telling them that Robert's evil uncle will be sending his forces to kill them all. "What are we going to do?" Zorro asks. "We've got to do one last important thing together." This turns out to be blowing up the meat-processing plant, because if they can blow up the bad guys shortly before the entire world explodes, they have technically won on points. Unfortunately, no one has any idea how to go about destroying the facility and they all scratch their heads briefly before the Middle Eastern couple, who have not said a word up to this point in the movie, step forward. "You want to make an explosion?" asks the wife. "Talk to my husband, he can make an explosion." Sure enough, the Middle Eastern man named Mohammed turns out to have extensive knowledge of how to construct a bomb capable of destroying a factory. Coincidence in casting?

Before it's time to declare jihad on the meat factory, Zorro and Olly stop off at a church so Olly can do a little praying. "I don't know how to pray," Zorro says, and after being taught how to kneel and press her hands together, Zorro suddenly experiences a full blown gauzy vision. Zorro wanders around for a while and soon encounters Jesus, who looks like a hippy the crew found on Santa Monica Boulevard. "So you're afraid of eating human flesh?" Christ says to her. "Oh come on, you always eat my Christ Crispies!" Zorro is too unfamiliar with religion to understand what a fucked up Jesus this is, so she stands around smiling while Jesus tells her to "cheer up, it's all bull" and talks to God with statements like "Shit Dad, you must have had one hell of a hangover when you created these guys." Meanwhile, famous dead people wander around the area, including Mother Theresa, Elvis, and Kurt Cobain, who I guess made it into heaven after all. After the single Muslim man in the movie turns out to be an expert bomb maker I thought this film was anti-Islam, but after this scene I think it's just anti-religion altogether. Damn Hollywood liberals.

After Zorro and Olly finish their blasphemous prayers they return to the apartment where everyone awaits the arrival of the death squad for some reason. Sure enough they turn up, and only when the posse hears the boots on the staircase do they get up and try to barricade shut the door. In the process, Robert gets pulled out and taken. "Rosie!" everyone screams. "They grabbed Rosie!" Rosie is apparently what they all called Robert, despite no one ever calling him anything even remotely close to "Rosie" in any earlier scenes whatsoever. Maybe they got him confused with Rosie O'Donnell, which would make sense since they are both loud, obnoxious, and have giant heads. After the death squad leaves, everyone spontaneously forgets that they all hated Robert for the entire previous 80 minutes and they speed over to the meat factory to save him. After running around for a while they finally grab him off a conveyor belt which was about to deposit him into a giant meat grinder, then as they are escaping, Mohammed's bomb goes off, and they barely outrun a giant fireball racing down the hallway as the entire factory goes up in flames.

Now that they have destroyed the only remaining food source in the world, the entire crew is giddy with joy as they drive home, laughing and smiling and hugging, cheerfully awaiting their slow death by starvation or a quick one by world-exploding. On that note, soon a press conference is called where the nerd from the beginning of the film announces that with updated measurements, it appears that the earth might not explode for another two thousand years. So was all this chaos for nothing? Is the entire movie a tract on the futility of human greed and malice? While the nerd expounds on these theories in an obvious political message, the world blows up anyway. The end.

I'm trying to figure out what the message of this movie is. We should treat each day as if it's our last? Because the people in this movie responded by eating each other. Mass hysteria is evil because we have to live with the consequences? But the world actually exploded at the end, so there were no consequences. I guess the moral of the movie is that it's better to be dead than eat human flesh, which I guess is a good message to teach people, so when I get stuck on a desert island, more food for me.