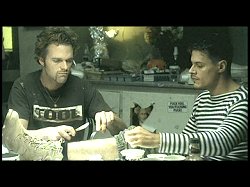 Are you crazy, man?! Don't eat his leg! His breast meat is much more tender!After a montage with the words "ONE MONTH LATER", the scene cuts to one of the Real Worlders, Olly, running along a dark gritty street, made grittier by the black-and-white film grains trying to recreate the fear and dread of having a broken television. As Olly runs, a van screeches to a halt behind him and several men in gas masks pour out, gas masks being the low-budget equivalent of stormtrooper uniforms. To the strains of a song that I think was stolen directly from The Matrix's soundtrack, Olly flees through about 500 quick cuts and 14 separate instances of slow-mo before he finally gets away and returns to the apartment, which has become some sort of refugee camp. Besides the original cast, the place has also become home to other random passerby, including:

Also Maia is living with the group, along with her boyfriend Robert, who looks like a cross between Jay Mohr and Conan O'Brien after being shrunk down to about 5 feet tall. He soon establishes himself as a rich asshole, which makes sense considering he's a full head shorter than his girlfriend. "My uncle might be creepy," he says, "but he's the only one that could save us from starvation." Apparently, all the pollution that will soon cause the earth to explode has also killed off all plants and animals, leaving humans with nothing but a dwindling supply of canned food. Robert's uncle, however, is some sort of supergenius who has come up with the answer to everyone's hunger woes in the form of what he called "designed food." There's a long flashback where Robert and Maia taste-test the designed food, which looks like a small pyramid of chocolate mousse. "This is the most revolutionary product ever created by human hands," Robert's uncle sniffs, and no one contradicts him because, after all, it's his dinner-party flashback.

However, Robert hasn't managed to get any designed food for the crew yet, so everyone fights over who is going to go out and try and get something to eat. Eventually Zorro and two of the Real World cast members end up going out to find food, which involves driving up to a storefront where citizens are waiting in line with meal coupons in hand, patiently awaiting their scraps instead of rioting like any proper pre-armageddon crowd really ought to. To signify just how on-edge the lines are, one woman takes out her hairpin and shanks the ten year old boy in line ahead of her, and everyone else in line just stomps over his corpse and curses him for not moving out of the way. What a cold, dystopian future it is. 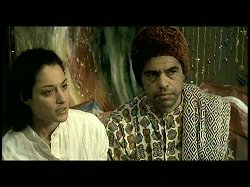 "Hey Mohammed, can you make us a bomb? Oh come on, isn't that what you learn in Muslim school? Allah is great, here's how to blow up a disco?"After Zorro and her posse roll up in their car, which apparently has a gasoline distribution pipeline still in place to fuel it, they all jump out and wave guns in the air, collecting food coupons and whatever small food stores the place has, before diving back in and peeling out before the crowd can overpower them with their hatpins and swords hidden inside umbrellas and whatever other retarded unconventional weapons people seem to enjoy using. As they're driving home they pass by a woman being beaten up by the same group of gas-masked thugs that were chasing Olly earlier in the movie, and they decide that as human beings they can't just let this poor girl be beaten up, because of course that will redeem their humanity more than allowing a throng of innocent people to starve to death.

Soon after rescuing the girl and returning to the apartment, everyone chows down on what little food they have before complaining about not having more. "I want to dive into oily spaghetti naked," one laments. Another guy rolls up his trouser leg and dares him to eat his calf, which the other dives for with fork at knife at the ready before being denied at the last moment. Finally after some downtime a few of the flatmates sit around playing backgammon. This actually shocked me a little since I had given up all hope of the film's title making any sense whatsoever. Apparently the two players have switched colors because of one them is confused if he is supposed to be moving the white or black stones. "Move the white ones, the black stones are bad," the other player says, and a nearby black resident yells at them for being racially insensitive, which seems like kind of a minor issue considering the world is soon going to explode. The offender clarifies: "the good stones are always your stones, it doesn't matter what color they are." The first one furrows his brow, hunger already gnawing away at his already-feeble brain. "But what if I am wrong and you are right?" he asks, unsure what to make of this backgammon-stone absolutism. "That's what's so cool about backgammon," says the second. "You can fuck up the whole game long, then with one good roll in the end you can still win." Not knowing the rules of backgammon I will assume this is a correct assessment. I assume there is supposed to be some sort of deeper meaning to this whole analogy worth naming the movie after, but I'm not about to dig for it.

Later, everyone is hungry again and the residents begin noticing that people are starting to go missing, including the creepy smiling lady in the wedding dress. "People are being grabbed by the men in gas masks and they're never seen again," one says. Just then Robert comes in with a tray of the mystery food, which everyone chows down on. "Not bad, what's in it?" someone asks. Robert looks around evasively after having a flashback to earlier in the day when he was forced to take a chainsaw to a big amorphous lump of raw meat. "Uh... vitamins?" he says unconvincingly. "Proteins?" Everyone nods in a satisfied manner, because they've apparently never seen Soylent Green.