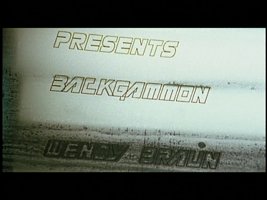 The Case For: If you're concerned with the damage to the environment, you can watch this movie and say to yourself, "well, at least pollution can't do something stupid like blow up the entire planet."

The Case Against: I didn't think it was possible for a movie to make me completely indifferent to every single person on earth being killed, but well, here we are. 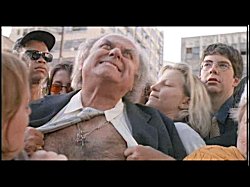 It was the fifth strangest thing the tourists saw in New York that day.When I was e-browsing the shelves of Netflix and came upon "Backgammon: Survival of the Misfits" I knew immediately that I would be watching it. Even though the name gave absolutely no indication of what the movie could possibly be about, I was determined to give my support to any film apparently devoted to a game played exclusively by 97 year old convalescents waiting to die. As I waited for the DVD to arrive I realized that the movie probably had little to do with the actual game of backgammon, which to the best of my recollection involves moving tokens called "backs" from spike to spike until you get so bored that you lie down on your back, called a "gammon", and pass out from "boredom". Instead it was probably some sort of bizarre marketing ploy, like the time I wanted to teach myself to play seven card stud and rented "Poker in the Rear Vol. 47". Long story short, I was so outraged at being fooled that I decided never to return the DVD.

When the movie arrived and I popped it in I had no idea of what to expect. Odds were on it being another lame action and/or horror movie, named "Backgammon" for some stupid impenetrable reason. The second, less likely option was that the movie had some pretensions at being artsy and highbrow and was thus named "Backgammon" for some stupid impenetrable reason, like maybe because the backgammon pieces are black and white and it's a metaphor for the racial tensions in modern America and I had to stop before I vomited on my "Poker in the Rear" DVD collection.

When the movie started with a lot of quick cuts and scene shifts and voiceovers at first I thought that I was being forced to watch a trailer for another stupid film which, according to a title card, was also called "Backgammon". It took the cogs in my brain a second to engage and initially I wondered about the odds of two movies both being named after the same dumb pastime when there are so many other possible titles like "Cribbage" and "Shuffleboard" and "Lawn Bowling." Then suddenly I realized that the beginning of the movie was actually a trailer for the very movie I was about to watch. My mind reeled as I tried to decide if this was a brilliant strategy, tantalizing viewers with a digested encapsulation what was to come, or if the makers just couldn't figure out how to make a separate chapter on the DVD. 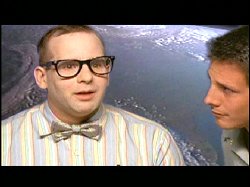 This is the man selected to tell the world that everyone is going to die. Presumably because no one would care when a mob lynched him.After the trailer ends, the movie actually starts for real, although it took a while for me to realize it because the actual film is only slightly less schizophrenic. One shocking aspect which was immediately apparent was that unlike basically every other stupid movie I've reviewed to date, "Backgammon" is actually a film, as in literally recorded on film stock. I had to squint for a while before the fist-sized grains on the specially-ordered 2mm film stock finally coalesced into an image, but the simple fact that the movie wasn't filmed on a camcorder gave it a certain cachet and air of respectability which was immediately ground into dust by the director's decision to constantly shoot in some combination of slow-mo, desaturated black and white, with a tilted camera, or mounted on a perpetual motion dolly. I think the director was hoping to make a name for himself so one day he could move on to shooting music videos for third-rate rappers who get rejected from BET. Time will tell, I guess.

The first character we meet is an early-thirties redhead named "Maia," tooling around a city in her luxury sedan. As she drives she begins lamenting to herself about her press-on fingernails and her leased car she can barely afford, and she manifests her dissatisfaction by suddenly getting out of her car to yell at a passing Jehovah's Witness. I think the this was supposed to be portrayed as a bad thing, although anyone telling off a Jehovah's Witness gets a gold star in my book. She also laments about her sister, who is named "Zorro" because apparently their parents didn't think that saddling one kid with the name "Maia" was quite cruel enough. Meanwhile, a fat television executive on a sidewalk has a chat on his cell phone, discussing how the world is going to end and how he needed to see everyday people one last time. Apparently the people didn't much want to see him, because immediately he starts getting crushed by other pedestrians from all sides. The executive starts screaming and tearing his shirt off, so naturally all the other pedestrians continue shoving against him as hard as possible until the police come and take him away.

Eventually Maia goes to visit her sister Zorro, who lives in a sty of an apartment possibly being used as a set for "The Real World" as it's inhabited by six or seven hip counterculture twentysomethings who sit around talking about their feelings. Maia comes into ruin their groove, telling them that they're all going to be evicted because they're bums who don't pay rent, and the punky-hairdo'd Zorro throws a fit and screams about how she doesn't want to live by the rules of The Man. While everyone is bitching and moaning they are interrupted by a special bulletin on the TV, where an enormous nerd, complete with grease-slicked hair, poindexter glasses, and pocket protector, telling everyone the latest results of his scientific studies. "We now believe that our planet, due to super-exponential gamma space radiation, as a result of the stratosphere pollution, has a maximum lifespan of one more month," he says. He then explains that this means that in about a month the planet is going to literally explode. Everyone in the ratty apartment blinks, hard. The news anchor crosses his eyes and passes out, because the extinction of the human race is funny.