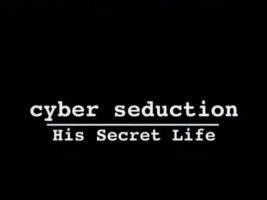 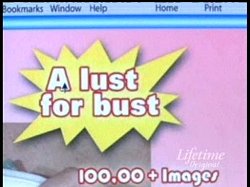 "Cyber Seduction: His Secret Life" is one of the most frightening films I have watched to date, not so much for any specific content it contains but because a) it's probably pretty much the same as any other horrible Lifetime Channel movie, and b) because there must be women out there that will watch it and treat its lessons as reasonable and realistic: that looking at naked girls immediately destroys your life and future, and more horrifyingly, it dooms your chances for scoring with not one but two hot girls.

The movie opens with bright-eyed sophomore Justin Petersen sophomore sneaking into his high school's gym and jumping into the swimming pool. No explanation is given for this mysterious opening scene. Why is he breaking and entering? Why is his pretty-boy face bruised and bloodied? Why does he jump into a pool and float lifelessly underwater? Obviously something horrible has happened to this poor boy, something which would shock and terrify any loving mother who might happen to be watching Lifetime TV. Perhaps he was seduced... cyber-seduced.

As Justin floats between life and death, the scene dissolves to a swim meet in the very same pool. With a caption of "THREE MONTHS EARLIER," we begin the journey of Justin's fall from purity and grace. Justin the competitive swimmer wins his race, accompanied by loud cheers and shots of his parents cheering him on. After winning the race he gets a big hug and kiss from his suspiciously hot girlfriend Amy, and after the meet Justin is announced as a member of the all-state swim team. What excitement! Surely Justin is on the path to success!

The next day at school, Justin is approached by the cool kids. We know they're the cool kids because they are wearing letterman jackets and have girls hanging off them, athletics and girls being the two major axes of perceived worth among modern male high schoolers. "Hey, heard you made all-state!" one says, and Justin is so thrilled that the cool kids are deigning to talk to him that he can barely mumble that it's no big deal. Meanwhile, Monica, the sluttiest of the sluts draped off the boys, starts making moon-eyes at Justin, something which will become important at a later point. As the in-crowd slinks off, one of them, Timmy, mentions to Justin that they should "hang out." Do people still say that? I figured high school parlance had probably evolved since 1993.

Later that night, Justin's middle-aged mom Diane is talking to one of her girlfriends about her date. "He practically jumped me as soon as I walked in the door!" her friend gushes. neither the friend nor her burgeoning sexual relationship are never mentioned again for the entire movie, meaning it probably existed solely to encourage middle-aged single women that they still had a chance of landing a man and not dying alone. Meanwhile, Justin is in his room on his computer when he gets an instant message from Timmy. "Stroke Man!" it proclaims, which might refer to his swimming abilities or, well, you know. "Check this out @ Monicas page". The unsuspecting Justin clicks the link and is transported to a standard softcore camwhore site, where the oh-so-slutty Monica is posing in such scandalous outfits as "belly shirt" and "big fluffy sweater." 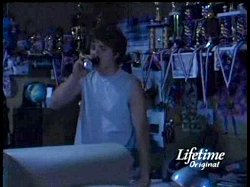 Stop chugging Red Bulls, you fool! The taurine gives you perv superpowers!Before Justin can fully descend into a pornographic stupor his dad interrupts, congratulating Justin on making all-state and saying that his plaque can go in the school case right next to his mom's, setting up another subplot which doesn't go particularly anywhere. "WE RULE!" the dad shouts, setting him up as an inoffensive loser, which is only reinforced by the next scene's revealing that he works in customer service. I hope Lifetime is planning a sequel where the father's job is outsourced to India, although that might be too male-sympathetic to pass muster, who knows.

While Justin's parents discuss spending the weekend at a bed & breakfast in order to set up a later event where the mother can call it off to register her displeasure with her husband, Justin and his girlfriend Amy head to a party being held by one of the cool kids. After navigating a backyard patio full of kids gingerly holding beer bottles and cups, they slip inside to find the cool kids. "Hey, want some beer?" someone offers, and both turn it down, because that is a life-ruining addiction for another TV movie. They find the cool kids and various hangers-on slouching around a TV, watching some sort of porno that involves extremely close-up shots of legs and arms while a man and a woman moan vaguely inoffensively. One of the cool kids pipes up. "Hey dude," he says to another kid with a keyboard. "Type up 'naked college babes'." Suddenly all the girls present in the room are offended by the guy's obvious piggishness, despite the fact that they are all currently watching the safe-for-television equivalent of hardcore pornography. "You guys are such losers," one girl says. "How would you like it if we watched naked guys?" Porn popups begin filling the screen. "This is hilarious," another girl says. "People are freaks." Apparently all the underage drinking has killed their short term memories.

Meanwhile, Monica continues making moon eyes at Justin before he is interrupted by his prudish girlfriend, who asks him if they can leave. Outside, the subject is discussed: "I don't get the whole porn thing," Amy says. "The way they do it, it's so... mechanical." Justin, who knows enough not to disagree, nods assent. "Is that a turn-on for you?" she continues. Justin pauses a moment before remembering the proper answer. "Not at all," he says sagely. "I mean, nothing compared to you." She, of course, believes his lies. Amy goes on talking about how she doesn't want to make love until the time is right and it has to be magical etc, in other words setting her up as the stock "good girl" character incapable of any overly prurient thought or deed. Then the two of them play some more graphic tonsil hockey and call it a night.

Her husband, as the clueless oaf that he is, sees nothing wrong with Justin's behavior. "That's pretty much what teenage boys do," he says, but his straightforward common sense only confuses his wife further and he has to promise to talk to Justin about it later. He rolls back over and falls asleep, which Diane sits up pondering this turn of events.