Overview: The Black Knight - a costumed vigilante whose mythos is based 100% on medieval history and has nothing to do with bats or bat-themed superheroes - fights for truth, justice, and the American lifestyle of not dying to weaponized super-viruses. We also hear that he Returns, although this isn't a sequel to anything so we're not sure who's Returning from what exactly, but we'll take their word for it.

The Case For: If you're deadset on watching a movie which is abbreviated "TBKR", and you can't find a copy of hard-hitting guerilla mockumentary The Burger King Rapist, then look no further.

The Case Against: Of all the "Black Knight" movies out there, this is the worst in every way by a mile, and that's including the one starring Martin Lawrence. 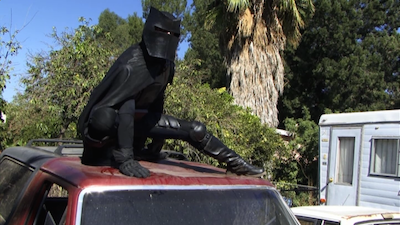 We know what you're thinking: "Seriously, The Black Knight Returns? Is this just the world's most brazen Batman ripoff?" Well, we can't bring ourselves to call TBKR just a ripoff, despite the obvious parallels. Sure, it just so happens that following the murder of his parents, a guy dons a black foam-rubber suit and cowl and fights crime with the help of some high-tech gadgets, martial-arts training and an elderly companion/advisor who knew his folks...wait, what were we trying to say about Batman again?

Oh, right, The Black Knight Returns. Okay, so it might be somewhat slightly derivative of Batman, but you should think of it as an extension instead of a ripoff. See, TBKR takes the time to really expand on the Batman mythos by asking the really important, burning questions on all of our minds. Questions like, "What if both of Batman's parents were also Batman, and they died in the line of duty? Would that make him, like, double-Batman?" Or "What if Batman was literally descended from a real black knight, and had hallucinations about fighting in medieval times, but then his crime-fighting approach involved no swordfighting at all but instead relied heavily on a machine gun and a hacker sidekick who likes to call him BK?" If you've ever seen a Batman movie, those questions have likely been weighing heavily on your mind for years.

TBKR was directed by first-and-only-timer Juan Avilez, who also wrote and produced, and who was presumably run out of Hollywood on a rail shortly after the world premiere on his step-dad's back porch. At least we hope and pray that he was, because the alternative is that he's hiding in an abandoned warehouse somewhere, feverishly preparing to start shooting The Black Knight Ascends. Or maybe he's hiding in James Nguyen's basement, learning how to unlock the secrets of truly godawful cinema, dreaming of securing the lowest rating on IMDB of and for all time.

Speaking of unwatchable garbage, there are some disturbing Birdemic parallels here despite the fact that this was made a year earlier; maybe James Nguyen was actually drawing inspiration from TBKR. After all, what are the odds that two directors would independently stumble onto the catastrophically bad idea of converting half of their action movie into a really boring slice-of-life drama showing two random jackasses on a terrible first date?

We're not complaining about the love interest stuff, by the way, because it is by far the least boring part of this movie about a martial-arts superhero who saves the world. It's okay if you just start openly weeping at this point, that's a normal response. 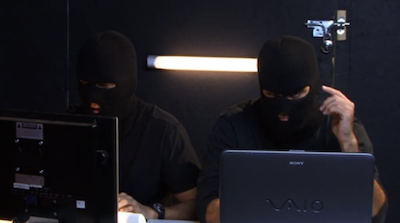 You guys know the masks aren't really necessary for a cybercrime spree, right?Alas, their young love was destined for another bland low-budget romantic comedy, but this is a Batman ripoff and so inevitably Miss Sweawesome is kidnapped by the bad guys to force our unlikely, unsavory, unbearable hero into an incredibly derivative "save the girl or save the world" catch-22 situation. Except Juan decided to put his own special twist in, and so BK chooses to save the girl and just let the deadly supervirus wipe the rest of us out. Then the twist gets even twistier, because BK is so terrible at everything that the girl dies anyway. And in a final twist worthy of M. Night Shamalayan working overtime in a pretzel and overwrought literary device factory, he goes on to save the world anyway. Maybe this is all some deep meta-commentary on the futility of free will in the face of a cruel and unjust world. Or, maybe this movie is dumber than a box of rocks that believe in dolphin-administered gluten-free homeopathic cures for moderate to severe death. Probably the second one.

We've already covered the high points and pretty much 100% of the plot, and yet there are a lot of small, awful details that we haven't even touched on. Like the fact that our buddy BK's real name is Evan Grail, and his greatest nemesis is National Smug Staring Competition 3rd Runner-Up Simon Darth. On the one hand, it's sort of refreshing that they didn't totally drive the medieval knight thing into the ground and call him Damien McMordred or something like that. On the other hand, his name is Simon fucking Darth. See, there we go on another tangent and we didn't even get to the extremely non-British and non-intimidating Council of Ultimate Evil, or the fact that most of the set design seems to involve surplus curtains and bedsheets, or the fact that BK's motorcycle stunt double looks like he has at least 150 pounds on him, or the presence of relative mega-star Win de Lugo, who must be pining for the quiet dignity of Weekend at Bernie's II after this.

We've already made the comparison with Birdemic above, but the problem is that on at least some semi-conscious level, James Nguyen and company must have known they were making a pile of flaming bird-propelled shit-garbage. There's no way any human being could have looked at those hovering CGI birdwretches and say "Yes, this is cool and great, and exactly what I was picturing in my head." With TBKR though, there's a chance; the stupidity is restrained enough that you get the feeling that they're really trying here. And somehow, that actually makes this movie worse than Birdemic.

Welcome to the bottom of the cinematic barrel, and may Bat God have mercy on your soul if you're reckless enough to treat yourself to 87 minutes of this: