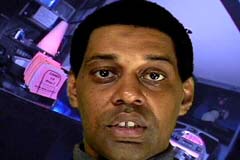 Our hero/director/writer/producer/editor. Within moments of stepping into this secret pool hall that evidently exists largely on the astral plane, Darius is approached by an older, pudgy black gentleman named Cliff. Cliff is the sort of grandfatherly black guy you expect to see in blues clubs, sitting at a table near the stage, tapping out the rhythm on his knee, calling out his agreement with the performer, even though the closest he's ever come to actually experiencing the blues is when his Acura broke down at the Carl's Jr. drive-thru. At least, that's how it works in my head. Anyway, Cliff strikes up a conversation with Darius, and before you can say, "God, Darius, you're such a jerk. The guy was just trying to be friendly," they're laying down the rules of a billiards challenge. The prize: five hundred bucks. The consequences for non-payment: severe. I have recreated the conversation below for your enjoyment. And since there would be no enjoyment if I left it as it appears in the film, I have added a few details. The italicized portion is mine. 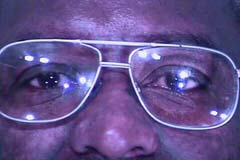 This is an actual, uncropped shot from an actual movie. Nice, right?

Cliff: "This is a gentlemen's game. I ain't gonna ask to see your money. But if I win, and you don't pay me, I'm gonna kill you." (Stares intently at Darius.)

Darius: (Stares so fucking intently at Cliff, I can't even believe it.)

Darius: "RRRRRAAAARRRRGH!" (His eyes turn blue, his hair stands on end and turns yellow, and he bursts into golden flame.)

As you can probably tell, I took the angry staring and went for the obvious Dragonball Z joke. But it should be made clear that The Last Pocket differs from DBZ in several crucial ways. For one, Darius and Cliff actually get to the action within the half hour time limit (point - The Last Pocket). For another, their acting is way, way worse (point - DBZ, and that's saying something). Cliff sounds like the grandfatherly black version of one of those text-to-speech programs. It's also worth mentioning that this entire conversation takes place in front of a green screen image of a pool hall, rather than actually in one. Despite the telltale outlines around both of the actors, I might not have noticed if Adam Aronson's opening monologue in front of a neon green wall hadn't put my radar up. Way to go, Adam Aronson - not only is your narration irrelevant and ungainly, but now you're shattering the illusion with your mere presence. 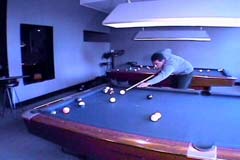 Exhilarating.With the stakes established, these two pool hall warriors take their totally unnecessary feud to the felt battlefield. My friends, I have seen The Hustler. I have seen The Color of Money. I have seen that episode of The Fresh Prince of Bel-Air when Uncle Phil has to bail Will out of his debt to the pool shark. I have seen all of these, I can say with absolute certainty that this is by far the lamest game of pool ever captured on camera. I love to shoot pool. I suck at it, but I love it. Despite my suckery, I feel pretty confident that I could walk away from a game against either of these guys with five hundred bucks in my pocket. Cliff talks a mean game, but when he takes the first shot and misses completely, all the menace just skips right out the door. Darius is better, but only enough to survive. Thanks to a fortunate break, the balls he needs are positioned for one embarrassingly simple shot after another. It's not terribly impressive to hear him call his shots when the ball he's aiming for is already sitting on the edge of the pocket.

See, this is another prime example of the Bowman Mystique. I realize it's difficult for filmmakers to create their vision on little or no budget. It takes a lot of forethought to craft a story that utilizes very limited resources. But Vince Bowman insists on making movies beyond his means. For instance, much of this movie takes place in a secret pool hall that caters to those for whom regular pool halls hold no challenge. And yet, neither Bowman nor any of the other actors in this film have any particular skill at pool. That's fine; a riveting game of high stakes pool can be simulated with some clever editing. Sadly, Bowman also doesn't have any particular skill with a camera. We literally have to watch every shot of this slow, sloppy game between two amateurs masquerading as people with talent. It begs the question, if Bowman can't play pool, and he can't figure out how to edit his shots so it looks like he can, why would he make a movie where he plays a pool prodigy? That's a question that'll keep me up at night.

Eventually, and I do mean "eventually," Darius sinks his final ball, winning five hundred dollars and Cliff's immediate respect. They strike up a friendly conversation, during which Darius confesses that he's in New York to find his father. As luck would have it, Cliff is his dad's best friend and former enforcer, back when Darius's father was a mob boss. What's more, Darius's dad owns this very pool hall! Isn't that a neat and tidy little coincidence? Cliff makes a phone call, and five seconds later, Darius's father is outside waiting for him. You know, as badly written and poorly conceived as Vince Bowman's world is, sometimes I wish I could live there and enjoy the many benefits, such as everyone that I meet being able to help me and instantaneous travel. I'd be a celebrity, what with my ability to convey emotions through facial expressions and inflection, rather than having to blatantly state my current mental status. Yeah, that would be sweet. 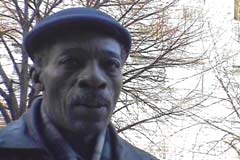 Papa Smurf.Stepping outside (and doing his best to suppress the nausea that often accompanies inter-dimensional travel), Darius finally comes face to face with Ray, the father who abandoned him so many years ago. Without so much as a "Hi," or a "How are you?" or a "If you traveled all the way from California to find me, without any idea of just how log that would take, why don't you have any luggage with you?" Ray shoves Darius into a car, then climbs into the driver's seat and takes off. Only after they've covered a considerable distance does Ray finally exchange pleasantries with his long lost son. For starters, he asks after the boy's mother. Yeah, how is that mom of yours, Darius?