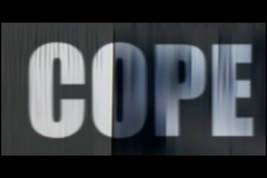 Overview: After the residents of a small Alaska town mysteriously vanish, a brother and sister must struggle against the twin evils of overcomplicated chronology and bad editing in order to save their family. As for the rest of the town? Fuck 'em.

The Case For: Incoherent direction really helps you understand the characters' confusion.

The Case Against: Drags on forever and prolongs the torture by continually hinting at upcoming girl-on-girl action, only to wuss out at the last moment. We have laws for a reason, dammit!

Are you tired of plot resolutions? Sick of characters that add meaningful contributions to the story? Bored with realistic dialogue? Do you just plain hate sensible chronologies, worthwhile storytelling, and yourself? Then come on down to Brain Damage Films, where one of our team of meth-addicted - I mean, dedicated - professionals will stab you in the kidneys with a sharpened toothbrush, steal your wallet, and piss on your toothbrush wounds - I mean, help you find the right movie for you. 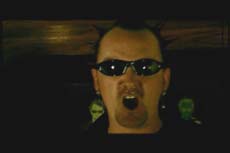 All Brain Damage movies open with this guy. Do you need any other reason to hate them?Brain Damage is truly a force to be reckoned with. They gave us Terror Toons and Sickness House, and frankly, you'd think they would have all killed themselves after that. Amazingly, those two films are barely the tip of yellowed, sulfurous iceberg that is Brain Damage. For instance, they have also seen fit to release writer/director Ronald Jerry's psychological thriller Cope. As with most of Brain Damage's library, they were only able to force this film on the public with a hearty dose of lies. Here is Netflix's synopsis of the plot. I've taken the liberty of making a few comments to clear up some minor discrepancies:

When the Allen clan* discovers that the other inhabitants** of their small Alaskan town have disappeared the family attempts to solve the mystery*** -- and to cope with their fears.**** The question is, what happened to the rest of the residents***** & and will the Allens be the next denizens to vanish?******

Okay, so the fine folks at Netflix probably didn't actually watch this movie. There's no shame in that,. Fortunately for you, the reader, and unfortunately for me, the me, I did. Cope begins with rapidly flashing glimpses of newspaper, all of them talking about a town where all the people mysteriously disappeared. One might wonder, if everyone in the town is gone, who reported it? This question becomes even more relevant when we learn that anyone who enters this town seems to fall victim to a similarly mysterious fate. One might also wonder why, if it is public knowledge that the population of Kodiak, Alaska has suddenly vanished, have authorities not swarmed the area with a full investigation? One might go on to ponder the wisdom of the decision to open the movie with newspaper clippings that raise these questions when it would have been just as easy, if not easier, to open with - oh, I don't know - anything else. All I can tell you is that if you have trouble getting past these logical gaps, you should probably stop now and go read something else on this site. I'd also stay away from The Weekend Web. 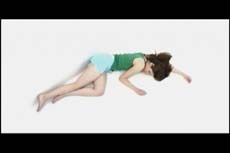 This image is roughly forty percent of the movie.The camera races through a house and into the bedroom of a teenage girl named Lauren, bobbing around as if to say, "I am representing the perspective of some sort of animal, monster, or person suffering from a congenital heart defect." Using the power of shitty camera tricks, this unseen presence drags Lauren out of bed, then goes and beats up her parents. Lauren wakes up in a totally white, featureless room with no visible exits. She flails desperately at the walls of her ivory prison, unsure of how she got there, how she could possibly escape, or whether she would ever see her family again&

Pancake time! Seriously, I know it's perfectly good form to transition between a sad scene and a happy one, but this is going from a girl who has been knocked unconscious, taken from her home, and trapped in blank isolation with no explanation or hope of escape, to pancakes. It's a little much. Surprisingly enough (or not, when you realize there are only like six people in this movie), the woman making the pancakes turns out to be Lauren's mom, and the recipient of said pancakes is Lauren herself. Clearly, this is a flashback to a happier, more pancakey time. Even her dad shows up for breakfast, looking decidedly un-beaten up. The dad may actually be more likable when he's getting the crap kicked out of his by an invisible monster, though, as he spends all of breakfast yelling into his cell phone and ignoring his daughter and wife. Now that we've established a lovely tone of family tension, it's time for things to get a little weird. 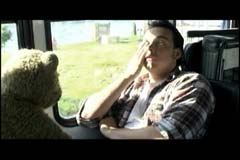 
Ronald Jerry: "Okay, I've got Mickey wandering off the abandoned bus, down an abandoned street, and into an abandoned bar. It's solid gold, no question there, but I can't help feeling like it needs something. If only I had some help"

Shoulder Angel: (Appearing on his left shoulder in a heavenly light.) "Lo and behold! It is dialogue which this scene lacks! Audiences won't want to watch some lumberjack wandering around for five solid minutes in total silence. Giveth him lines, and everlasting glory shall be yours!"

Ronald Jerry: "Hmm& sounds okay, but I think I can do better."

Shoulder Devil: (Appearing on his right shoulder in a burst of flame and brimstone.) "Split-screen, motherfucker. It's never a bad time for split-screen."

Ronald Jerry: "But why? I wouldn't have anything to show in one of the screens."

Shoulder Devil: (Jams a tiny syringe in Ronald Jerry's neck.) "Split-screen! Can you feel it?"

Ronald Jerry: (As his pupils dilate) "I can feel it! Split-screen for life!"

Back in the white cell, Lauren is asleep on the floor, so she misses it when a panel opens near the bottom of one of the walls an a bowl of green play-doh is slid in by an unseen hand. When she wakes up, she nervously tastes the green paste, then starts wolfing it down. While she works on that bowl, another one materializes in the air behind her and falls to the floor. Some people might wonder why Lauren's enigmatic captors would bother sliding a bowl of food into the room when they can just materialize them out of thin air. Others might wonder why I've taken up binge drinking, but I doubt they'll be the same people. 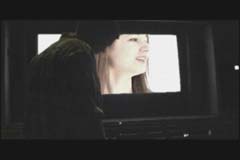 Sorry, Lauren, this will be the only time you'll ever be on the big screen.After eating her fill of green paste, Lauren tries a new tactic in her quest for freedom: shouting at the top of her lungs. I can't believe that we're this far into a movie where one subplot involves a girl in a seemingly impregnable prison and another subplot involves a guy looking for signs of life in a seemingly deserted town, and yet this is the first time either of them has tried shouting to see if anyone can hear them. That would be the first thing I tried in either of their situations, followed closely by wetting myself (in the case of a white prison) or looting everything in sight (in the case of an abandoned town). Oddly, Mickey can actually hear Lauren's pleas for freedom. He quickly realizes that there is only one place in this town that a girl could get trapped with no hope of escape, so he immediately breaks into the local movie theater. Yup, Lauren is screwed. Actually, somehow her image does flicker across the screen in the movie theater, but it just so happens that Mickey is staring at his shoes and misses it entirely. Like I said, screwed.

More flashbacks begin to reveal more of Lauren's home life by showing her family at dinner. Yes, her dad is a real a-hole who doesn't want to make the slightest effort to understand her. On the other hand, her mom made pancakes for breakfast and homemade fried chicken and mashed potatoes for dinner, so she really doesn't have much to complain about. Her dad follows up on being an irrationally angry, inattentive father to Lauren by also being a complete cock to her friend, Alice. He thinks she's going to introduce his precious little girl to a bunch of horny boys. The joke's on him, though - Lauren and Alice are gay for each other! At least, it seems like they are. They keep having moments where they almost kiss, but something interrupts them, like a stray thought, or one of them spontaneously developing a wet, festering wound for no reason.

Sadly for Lauren, every time she has a flashback, when the scene returns to her sitting in her white cell, she looks a little more beaten up. First it's a bloody nose, then a black eye, then she busts open the back of her head, and so on and so forth. I'd like to tell you that this continual abuse and degradation of a perfectly sweet teenage girl serves some sort of narrative purpose, but that would be implying that there's a narrative. Really, it's just Ronald Jerry working out his frustration over all the girls who rejected him in high school because they were conveniently "gay." Whatever the cause of Lauren's injuries, one thing is clear: she's much better off when the story sticks with Mickey.