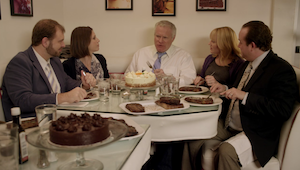 This leads us to the other problem with Christian Mingle: if you’re any of the kinds of Christians who aren’t insane, tyrannical zealots who think that the Pearly Gates include a big neon leaderboard with points for every Bible verse you commit to memory and can whip out at opportune moments to tastily zing non-believers at dinner parties, then you’re also not going to enjoy this portrayal of the kind of person who prays to shredded dudes hanging from sticks or hangs out on PlentyOfJesusFish.com. In other words, for once, the Christians are with us on this one: shit, they actually seem to hate this movie even more than we do.

See, the thing is, Lacey’s character actually admits to being Christian and believing in GOD-UH at the beginning of the movie, so she’s not actually lying to anyone with her dating profile. But the limp-dicked 5’8” walking slice of soggy Wonder bread that she meets online, and even moreso his family of sadistic, jowly harpies, are constantly raining down shit all over her face for not being a “real Christian” because she doesn’t pray good enough for them, i.e. recite the entire text of the Book of Job verbatim while hanging upside down in a straitjacket underwater before every meal. This bit is particularly funny, because the only people who are actually seen committing deadly sins in this movie are the Bible-quoters, specifically envy and gluttony.

Gluttony in this case is our favorite by far, mostly because it takes the form of one of the weirdest, fakest, most awkwardly staged rituals of human interaction we’ve ever seen: the "Steak n’ Cake" - a post-church brunch ritual which consists of one giant plate heaped with a metric fucking ton of steaks, and not one, not two, but five entire cakes for dessert. No sides, garnishes, or condiments either: those would just be empty calories, which we all know the big G-man hates more than sodomy and shifty Hebrews combined. But it’s okay, they memorized the magic Jesus words so they’re allowed to order enough food to feed an entire starving village for 18 months and then throw most of it away while greedily smacking their disgusting, hate-filled lips through a holy deluge of meat sweats, Praise the LORD! 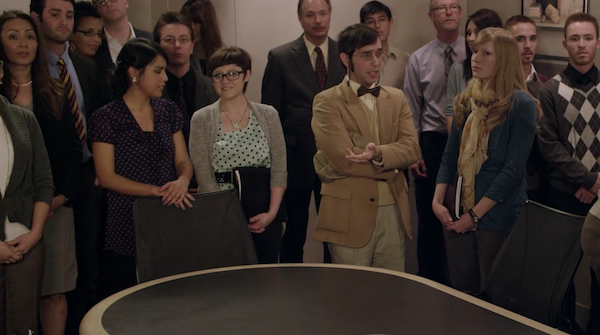 Pictured: what a Christian Mingle singles meet-up looks like (if you’re lucky.)Basically, any possible kind of Christian is going to be utterly repulsed by one side or the other in this movie. And if you’re not a Christian, you can’t even watch this movie to make fun of it, because it’s still 80% slow-paced romance so cheesy it’d make a Hallmark Channel producer roll their eyes, and 20% hanging out on a dilapidated Hee-Haw set full of cringe-inducingly racist Mexican stereotypes that we’re supposed to believe is some kind of contemporary Mexican village. The movie’s equally painful B-plot revolves around poor, boring, unlovable Lacey’s day job as a soulless marketing hack trying to cobble together a half-assed media campaign for a shitty snake oil baldness cure to pitch to her boss, a certifiable lunatic who literally believes he’s a sea captain and walks around making terrible nautically-themed puns, because that’s how comic relief works, right guys? Guys?

If this is really supposed to be some kind of shameless product placement for BibleHumpers.com, it’s entirely based on the hope that people won’t get past the title. We sure wish we hadn’t. The moral of the story? Obviously that every Sunday is the Lord’s day, not because of church or any of that gay little shit for nerds, but because it’s Steak n’ Cake day, and thee shalle keepeth it with the holiest of cutlets and sweetest of desserts, forever and ever, Amen.