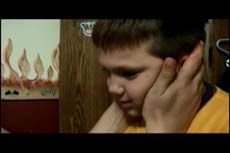 "Oh man, I come out of the cabinet for two seconds and some guy puts his hands all over me. This is just like Christmas with Weekend Dad."Speaking of our favorite flannel-clad nomad, he's given up on looking for people in bars and movie theaters and instead starts letting himself into people's houses. As luck would have it, he finds someone in his very first house - a boy named Franklin who has been hiding in a cabinet ever since his brother was torn to shreds by an invisible monster during a game of Hide and Seek. The poor guy went and hid and never came out, just in case the whole "being slashed to ribbons" thing was just a trick, and his brother was waiting to tag him out. Can't fault him for dedication. Of course, now that there is a new character in the mix, Ronald Jerry has to come up with what Mickey, as a responsible adult, should do in this situation.

Ronald Jerry: "So now Mickey finds this kid. His brother's dead, but we haven't established much else about him. What should he do next?"

Shoulder Angel: "Mickey should enquire about the child's parents; they may still be in the area and are likely terribly worried about their son."

Shoulder Devil: "He should take the kid out of his home and spoon with him in an open, grassy field where anything or anyone could get them."

Ronald Jerry: "I don't know about that one."

(Shoulder Devil sticks another syringe in his neck.) 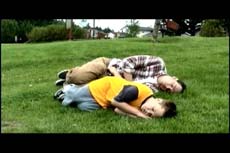 Take away the pedophilia, and this is still deeply, deeply wrong. enough, Mickey takes little Franklin to a grassy field, and the two lay down and spoon the hell out of each other. When Mickey wakes up, he is utterly shocked to find his cuddle-buddy gone, because he is an idiot. Suddenly, he spies Franklin off in the distance, walking toward a woman he seems pretty sure is his mother. Mickey knows better. He's known Franklin for several hours, long enough to know that he has no mother. Before Mickey can stop him, though, Franklin reaches her, and is immediately devoured by the invisible monster. The monster takes a decent chunk out of Mickey, too, but leaves him alive.

Now, you're probably saying, "Wowie gee, Greasnin, this movie has more twists and turns than a roller coaster built for snakes! What with the imprisonments and the abandoned towns and the children hiding in furniture and the levitating bowls of food, how could this get any crazier?" Well, I hope you don't suffer from embarrassing foot odor, because I am about to knock your socks right off! Check it: bleeding and mildly distraught that Franklin disappeared, Mickey lets himself into another house, only this time, it's Lauren's! Because he's really Lauren's big brother!

Yep, that's right, Mickey is Lauren's big bro, in town for a quick visit or something. And yet, despite his family living in this town, this is the first time he's even bothered to look for them. That's right, he actually chose to sleep in an open field with a complete stranger over going home and seeing if his family is okay. Terrific.

In another flashback, Lauren recalls her father telling her that he just got a major promotion, but it would mean the family would have to move to Chicago. Lauren takes it well, telling her dad to fuck off and running out of the house. She bolts to Alice's place, where the two girls pull each other close, stretch out on the kitchen floor, and& go to sleep. Goddammit. Look, if you're going to make me sit through ninety minutes of this crap, you have to give me some girl-on-girl footage, or at least some gratuitous boob shots. This& this is just malarkey, that's what! 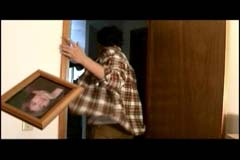 Note to Filmmakers: Just because you CAN doesn't mean you SHOULD.Mickey wanders through his own home, eventually making his way to Lauren's room. He picks up her picture and gazes at it fondly. Suddenly, he hears Franklin calling out to him. He drops the picture, which floats up into the air, shatters, and starts to bleed. You know, just like in real life. Mickey runs out of the house and right into a montage. As unbelievably sappy music fills the air, we see someone who looks like the dad huddled in a sewer, some random dude in his boxers stumbling through the snow, and a girl underwater, as well as a shot of little Franklin trapped in a cage in a fiery landscape, and some girl being pursued by a car. The beauty of the music almost makes it possible to forget that none of these images have anything to do with this movie. Even the images of the dad in a sewer and Franklin in a cage are totally useless, since they don't correspond with anything else in the movie. 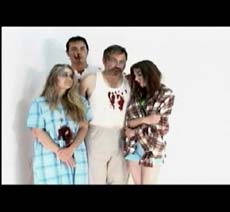 Awww...No, instead Mickey comes across a bunch of dead bodies in the woods. While he continues looking for Franklin, we transition to Lauren, and see that she is no longer alone in her cell. Her parents are now there with her. Then Mickey finds Lauren's body among the dead. That's right, she's been dead this whole time. Think that's a zany twist? How about this one: Mickey then turns over one more body and sees that it's his own! He pulls open his shirt, realizes that the wound he received from the invisible monster was deeper than he thought, and collapses to the ground, presumably leaving two corpses. He then appears alongside his sister and parents inside the white room. They all gather together for a nice, silent, dead family moment.

The credits roll, and with them comes some choppy footage of a girl being attacked by the invisible monster while showering, which explains a throwaway image from early on in the movie, when Mickey finds a overflowing bathtub full of blood. Just in case you cared.

Okay, let me get the good news out of the way. The acting is actually pretty decent in this movie, with the exception of the dad. The music, while often horribly inappropriate, is still pretty good, and I can't complain too much about the sound quality elsewhere. With those lovely points in mind, would somebody please tell me what the hell is going on in this movie? It wouldn't take much, you know. Just Mickey saying, "Where is everybody?" or, "What happened to all the people?" Anything to show he actually has some interest in, well, anything.

Still, even Mickey's series of bizarre decisions is like a leisurely stroll down Good Choices Lane compared to the utter insanity of Lauren's whole plotline. Alright, I get it, she's a semi-closeted lesbian whose father doesn't respect her or her life choices, but what the hell does that have to do with anything? There's an invisible goddamn monster running around, killing/beating/teleporting people all over the place. Some minor daddy issues hardly seem like the her primary concern. Then you have her trials and tribulations in the white room. The revelation that Lauren is dead the whole time certainly clears up the mystery of the floating food bowl - although not the mystery of why she'd need to eat - but I didn't even bother to mention some of the wacky crap that gets thrown at us during her scenes in there. Like the time a television appears out of nowhere, and despite the walls being entirely featureless, Lauren knows just where to plug it in. Of course, then it shows her a scene from her past, but with a different outcome than what actually happened. Then her dad appears in the white room, wearing a Hawaiian shirt, and unplugs the TV before vanishing into thin air. Figure that one out!

When you are confronted with a movie this strange, this impenetrable, this confusing, you have to approach it clinically and try to figure out some way to make it all add up. Let's see what we've got:

End result: This is a movie about family togetherness. Hooray!