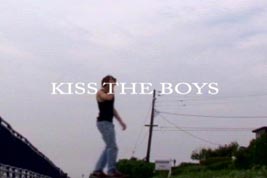 Overview: A plastic surgeon sentenced to death for the murders of several male escorts tells his story as slowly as possible.

The Case For: Good use of music and relatively high production values.

I understand and, indeed, support the need for gay- and lesbian-oriented cinema. Given the prevalence of alternative lifestyles not just in modern society, but throughout all of human history, the limited amount of entertainment that addresses these lifestyles honestly and intelligently is absolutely shocking. Sure, there's all the fine programming on Bravo, but that hardly seems like enough. When you're talking about gay-oriented movies, you're basically limited to films about young people falling in love despite their parents objections and running away together, often with predictably tragic results. It's basically just gay Romeo & Juliet over and over again, and that gets old fast.

Thus, when I heard that there was a movie about a gay serial killer, I thought, "Finally those fags are doing something right." It didn't bother me that the title, Kiss the Boys, was clearly ripping off 1997's Kiss the Girls, starring Morgan Freeman and some form of Judd. I chalked it up to the gay community's legendary wit, otherwise known as the freedom to make bad jokes at obnoxiously high volumes and get away with it because they're gay. I really, really wish I had been right. A flamboyantly gay spoof of the thriller genre would be hilarious. They could call the detective Organ Freeman. Sadly, Kiss the Boys isn't a spoof. It's an honest attempt at creating a thriller by flagrantly stealing bits of far superior movies and lashing it all together with a hearty dose of homoeroticism. Writer/director/editor/producer Greg Osborne, I've got a bone to pick with you, and yes, I mean that exactly the way it sounds. 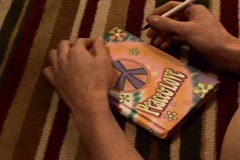 That is one bodacious diary, right there, dude.The fun begins in California in the summer of 1986, as a nineteen year old skateboarder named Scotty comes home and writes in his kickin' rad diary about how totally stoked he is to be hanging out with some guy named Sam later on that night. Flashing a few good glimpses of his totally bitchin' bacne, Scotty sets up a camcorder to record the tubular fun he has in store for Sam. What sort of tubular fun, you ask? Well, I don't want to spoil anything, but let's just say that there's a nice, juicy pun implied by the word "tubular."

We flash forward to the present day and find ourselves stuck squarely in the beginning of an extended plagiarism of The Silence of the Lambs. The entirely coincidental similarities begin with Special Investigative Reporter Jackie jogging through the woods. Her jog is interrupted by a call from Detective Brennan, who wants her to interview a death row inmate who is a week away from execution. This is nothing at all like how Clarice Starling first appears while jogging in The Silence of the Lambs, only to have her jog interrupted when she is asked to take on the Buffalo Bill case, and anyone who says otherwise just hates gay people. 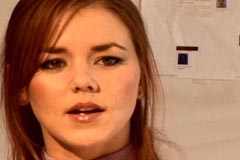 Hello, Clarice.Jackie arrives at the California Maximum Security Prison, where she is led to a room to wait for the arrival of Sam. It seems he's been convicted of the murder of five male escorts, but the police still don't know where the fifth body is, and they need Jackie to get it out of him before Sam gets the chair. Detective Brennan brings Sam in in chains, sits him down across the table from Jackie, and gives her the whole "Don't get too close speech" that Dr. Chilton gives Clarice in Silence of the Lambs, including warning her that Sam ate the face of the last person who tried to interview him. In fact, come to think of it, this whole scene really amps up the plagiarism. Jackie suddenly has a southern accent, which comes and goes throughout the movie, and Sam is portrayed as a hyper-intelligent, ultra-manipulative madman.

The problem is, Sam is no Hannibal Lecter. Hannibal Lecter was a master psychiatrist who used his intimate knowledge of the human mind to delve into the psyche of his victims and trick them into giving him what he wanted. Sam is a plastic surgeon who killed some whores. Furthermore, Hannibal Lecter spoke with the slow ease of someone who knows he's in complete control, Sam speaks with the slow verbal constipation of someone who's pretty sure it's his line, but doesn't want to chance it. 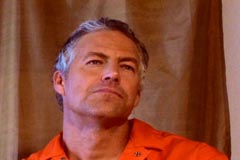 "I ate his dick with some fava beans and - wait! - I mean 'liver!' Shit, what did I say?"Sam agrees to tell Jackie what she wants to know, but only if she'll play by his rules. What sort of diabolical rules has this monstrosity cooked up, you ask? What sort of fevered machinations has he dreamed up to torment this young woman in his last fleeting moments before death? Riddles and anagrams, like the esteemed Doctor Lecter might do? A little quid pro quo? Basically, yeah, if you consider telling Jackie his entire story without asking for anything in return to be a little quid pro quo. I know Sam does.

His story, and the true butchering of the chronology of this movie, begins two years ago. Sam was a wildly successful plastic surgeon in L.A. at the time, and owned a lovely home, which is why it is somewhat surprising that Brennan and his men still don't know Sam's last name. Anyway, Sam comes home one day and finds a note from his wife saying that she's left him. The sudden removal of a strong female presence in Sam's life allows his gay side to come out. His gay side, in this case, is represented by the ghost of Scotty, the teen he killed all those years ago. How do we know he killed him? Well, I suppose we don't, given what's been said in the film so far, but then again, it is written all over the damn box, so that might be a clue. 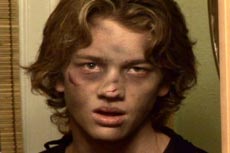 I don't care how undead he is, I just can't be afraid of someone named "Scotty."Scotty tells Sam that they're going to play a game, and that the name of the game is "Kill Male Escorts-opoly." Well, to be totally honest, I'm not really sure what Scotty says. Evidently, being dead lowers your voice to a register that can only be heard by dogs and certain attentive squirrels. The point is, the next day, Sam goes to a diner and finds himself flirting from a distance with a redheaded young man. As the man leaves the diner, he drops a business card on Sam's table. Luckily enough, it seems the guy's an "escort," read, "mangina with hourly rates."

Sam pauses in his story to explain to Jackie that he exclusively killed men not because of his throbbing attraction to them, but because they are typically bigger, and thus contain more blood for Scotty to drink. Scotty, being a disembodied manifestation of a long-dead teenager, is all about the blood drinking. One would think it would stand to reason, then, that Sam would be just as happy with grotesquely fat victims, since they would be so full of the vital fluids he seeks, and yet, as circumstances would have it, he only kills man whores in peak physical condition, and in Tony's case he only kills him after he spurns Sam's sexual advances. Yes, that's right, Sam actually manages to fail to get action from a prostitute. He tries to make a move on Tony, and Tony pulls the old "I have to go to the bathroom" trick to get out of it. Now, I don't claim to be any great Casanova, but if you're a relatively good-looking guy, which Sam is, in an if-Dennis-Quaid-and-Bob-Odenkirk-had-a-baby kind of way, and you're wealthy, which Sam is, and you've actually paid someone to have sex with you, and you still can't get any action, you really need to think carefully about what you're doing wrong. In Sam's case, the big turnoff may be the fact that he talks way too fucking slow. Nobody likes a slow talker. Not a one. Hell, the only reason Tony even agreed to meet up with Sam, by his own admission, is because he had been having a slow month. Maybe that's because he has no chin. 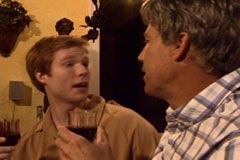 Tony was just happy to get work as something other than a stunt double for Lonnie on Scrubs.In any event, Sam slips Tony a roofie, and that's all for him. Tony wakes up in nothing more than his underwear, laying on a table in Sam's basement, surrounded by scalpels, saws, and all manner of instruments of torture. Sam has a camera rolling to record every excruciating moment, and he is about to slice into Tony's flesh when his cell phone rings. Despite being mid-torture session, Sam walks off to answer his phone. He's the Paris Hilton of torture videos. When Sam returns, he has a vision of Scotty telling him to kill Tony slowly, and to kill his later victims more quickly. This is not good advice. Serial killers are generally successful at first because they kill quickly, then end up getting more elaborate, which becomes their downfall. Sam starts big and works his way smaller, which is probably why he's captured so quickly. Seriously, if you consider that he only abducted Tony two years ago, factor in the time it would take to get to trial, and add in the time he must have sat on death row, Sam must have been at large for forty-five minutes.

It is appropriate, then, that the next part of the story that Sam tells Jackie is what it was like to be caught by the FBI. As we witness armed agents burst into his house and throw the cuffs on him, sad violins underscore the scene, highlighting the inner grief Sam must have felt when he realized that his house was finally full of beefy men, but likely none of them would want to have sex with him.