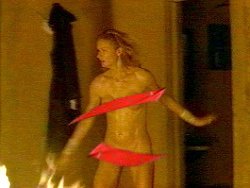 Justin's mother frets about naked ladies on her son's... no, wait, that's the same actress doing full frontal nudity in some other movie, sorry for the confusion.The next day, Justin wanders over to Monica's house, where he's invited in, and she leads him directly up to her parent's bedroom, as evidenced by pictures of old people decorating the walls and a tuxedo hanging in the corner. I'm not sure if Monica's parents are in on her little camwhore business or if they're just never around, neither would be surprising. Justin is so porn-addled that even when Monica because pawing at him and removing her clothes, he is confused as to what he should do. Does porn turn you into a sex fiend or one who avoids the touch of others? Which message is being sent this minute? Justin can't decide between the polar opposites and tells Monica that he doesn't think that he is up for any funny business. Monica's demeanor changes instantly from sex kitten to crazy bitch. "You're turning me down? No one turns me down!" Justin is chased from the house, and Monica, who is obviously some sort of damaged goods, retreats to the bathroom, where she weeps and, uh, watch the Flash movie, I don't really want to spoil it, but I assure you it pretty much makes no sense in or out of any context.

While Justin is walking home, Diane gets a call from the bank asking about "unusual activity" on her credit card account, because no normal people anywhere have ever purchased internet pornography and every such charge is immediately pounced upon by diligent watchmen. She starts browsing the computer while her husband watches, and suddenly they are deluged with an endless torrent of porn popups emanating from nowhere with no way of stopping them. As they fumble frantically to contain the outbreak before it permanently pornifies their system, Justin happens to arrive and, seeing his shame unfold, dives for the power switch. His parents are understandably furious at Justin's idiocy and scream at him for a while, with Justin eventually shoving his dad which starts a furious shoving match between the two! "You want to hit me, dad?! HIT ME!" Justin screams, while Diane holds her head in her hands and cries for the madness to stop. Eventually everyone storms off, like a well adjusted family does.

That night, Justin asks go to talk to his girlfriend, who apparently is now his ex-girlfriend since I guess they officially broke up off camera at some point. Diane drives him there and then drives off, which seems a little premature since Amy doesn't let Justin in, instead sequestering him to the front step. "Do you think we could just talk sometime?" Justin asks, which Amy shoots down with a terse "I don't think so." Ooh, harsh. I guess it's over, then. Justin is heartbroken:

Justin: I was actually thinking about going to church with you.
Amy: Wow, that's pretty radical!
Justin: Yeah, I need to get radical.

Then Amy smiles and says that she'll be there for him if he needs to talk- wait, what? She says she doesn't want to talk to him, then twenty seconds later promises to always talk to him if he needs it. No wonder Justin is getting so screwed up, the barrage of mixed messages is coming from all angles.

Now we're back where we started, as Justin breaks into the school gymnasium for some reason, jumping into the swimming pool and floating around underwater. Is he going to die? Does Justin have the willpower to force himself not to breathe? As he floats, he sees visions swimming through his head, not of pretty girls but instead of his supporters smiling and cheering him on -- his family, his girlfriend, even his coach who did nothing but scream in rage at him the entire movie. Suddenly aware that he has so much to live for, he bursts out of the pool in possibly the most poorly disguised baptismal analogy ever attempted on film. The end.