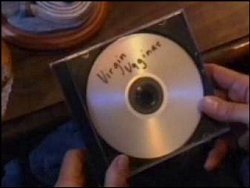 What? No, no, it's an instructional manual for, uh, keeping your vagina its... uh, virginest.The next day at swim practice, Justin's late night shenanigans catch up with him as his lap times deteriorate. His angry black man of a swim coach chews him out over his sudden slowness. "That is a sorry excuse for a swim and you know it!" the coach screams. Justin apologizes and as he looks around the pool, he suddenly notices that another swimmer has large breasts, as evidenced by a slow-motion closeup of a girl's swimsuit-covered bust while Justin stares with glazed eyes. Do you not see what porn is doing to him? He is noticing that women have curves! This is clearly unacceptable behavior for a teenage boy and the ominous music warns us as such.

Later at school, Justin is walking down the hallway when, like a butterfly emerging from its cocoon, he begins to realize that there is highly sexualized imagery all around him, everywhere he looks! His girlfriend's incessant drone fades out as Justin focuses intently on legs, hips, butts, breasts, and all other aspects of womanhood which prior to that point had only struck him in a coldly academic manner. There is literally a 30-second montage of various female body parts as Justin gazes in wonder. And to think he would never noticed without the cruel influence of porn, it is truly saddening.

That night, Justin is back on his computer when his father comes in to have The Talk. "Multitasking?" he says, hoping to lighten the mood. Justin reddens a shade and promises that it will never happen again. Problem solved. But then the idiot father continues. "It's normal for all guys to look at pictures," he says, merely confusing his son. "When I was your age, we used to hide our Playboys under the bed." Justin laughs a little. "There's no problem," he says. "Like you said, all guys do it." No, Justin's dad, no! You don't admit your own failings in front of your children, it only promotes mixed messages! God, if only you had been steadfast on the no-naked-girls policy maybe this would all have been nipped in the bud and a crisis averted. Stupid men, oh if only women ruled the world there would be no war. Wait, where were we? Anyways, Justin's dad leaves, convinced that everything is set straight, but later that night, Justin rolls out of bed, turns on the computer, and this time makes sure to close the door, for he has learned that deceiving your parents is the first step to being a proper porn fiend.

Now the downward spiral has truly begun, as the next day at swim practice, Justin is sitting on the far end of the bleachers playing with his girlfriend's PDA, which includes looking at pictures of clothed women and send them to "Justin@e-mail". That night, Justin listens to a horrible Linkin Park soundalike band in his room, while looking at some good old fashioned porn. He swigs a can of Red Bull, in what will become a running theme for the rest of the movie. While he's in the middle of his porning, his little brother Alex bursts in and sees a torrent of popups while Justin struggles to close them. "Hey, what's that?!" he shrieks, and threatens to tell mom unless Justin will show him. As a good older brother, Justin acquiesces and shows Alex his cache of pictures of clothed women, which is enough to shut Alex's frontal lobes down and during dinner he listlessly stares into the distance, his youth and innocence ravaged by Justin's demon porn. Diane notices and asks if there's a problem. Justin thinks quickly: "he's all pumped up because he beat the drug dealer in Grand Theft Auto." Wait, their mother lets a ten year old child play GTA? Suddenly a lot of problems this family has are becoming clear.

That weekend at the big swim meet, Justin wastes time downloading more porn onto his girlfriend's PDA, causing him to nearly miss his race. After being dragged away from his smut and running to the starting block, Justin puts on a dismal performance, as evidenced by the fact that he loses by about half a body length and comes in third place in the all-state swim meet, which would be pretty good by normal earthling standards. Justin's mom, however, is so disappointed in his horrible performance that she refuses to even applaud his third place finish or look in his direction. Again, the source of the family's problems becomes increasingly apparent. 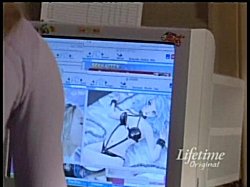 Meanwhile, Diane talks to her teacher friend about her ex-husband's porn addiction. "We stopped having sex," she starts. "I thought it was getting routine, so I tried to spice it up, and he went into the den." Suddenly she is deathly serious and speaks in low ominous tones. "The COMPUTER is in the den," she says, and Diane is shocked beyond words. Her friend continues how she "couldn't do anything" because she was "too embarrassed" and "so hurt" by her husband looking at some pornography, so instead she went back to bed and let him continue. Long story short, they eventually got a divorce, but it was, of course, entirely his doing and had nothing to do with her radical Puritan attitudes about sexual rights and wrongs.