Overview: Some teleporting guy with a monster mask runs around a hospital and terrorizes real people who act like fake human beings. It's just another typical "Full Moon Pictures" film, and is just like every single other movie they've ever made: really damn bad.

The Case For: If one of your friends wants to become a nurse or doctor and you don't want them to (for whatever reason), you can show them this film and hope that the threat of a teleporting guy in a monster mask hanging around hospitals will "scare them straight".

The Case Against: No naked girls, no monster suit, no real action scenes, no fun. 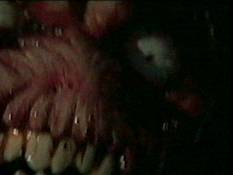 Mr. Shrieker. This is the most you'll ever see of him at once.

I have figured out what it takes to make a "Full Moon Pictures" movie. All I need is to spend a couple hundred dollars on a plastic mask, find an abandoned building, and then pick up some starry-eyed 20-something year old people from "Big Jim DeLucia's Pretty Boy Downtown Modeling School." I will steal a blue light from a Christmas display, film some guy in the monster mask for 10 seconds, then spend the rest of the day shooting footage of kids running in random directions and shouting. I'll slap a sticker on a movie jacket with a name like "Terror Claus" or "The Horror" or "142 Fright Lane" or "Alien Haunted House Rocketship Barn of Terror Puppet Doom Planet" and bam, ship that sucker off to Blockbuster Video. I'll be making millions any moment.

With this in mind, let's look at another "Full Moon" classic, "Shrieker", which follows the exact same formula as every other piece of tripe these hacks shove out the door and into Blockbuster Video's gaping anus. In case you don't know, here's how to make a "Full Moon" movie in under 10 scenes:

SCENE 1: Backstory. A couple people we don't know are murdered by some monster. At least one closeup of somebody's horrified face is required. (cue title sequence)

SCENE 2: All the characters are introduced to each other. They are failed models who each have one-dimensional or stereotypical personalities.

SCENE 3: Characters go to bed for the night. Monster appears, but doesn't do anything significant.

SCENE 4: When all the characters are together the next morning, somebody asks if they heard a noise last night. Nobody did. The following night, the least desirable character is killed.

SCENE 5: People wonder where undesirable character is, but don't look too hard. One of them finds some obvious clue the monster left behind.

SCENE 7: Main character finds out about monster and tries to convince everybody else that it exists. Nobody believes him / her.

SCENE 8: Monster kills somebody else, but is witnessed by other people who try to kill it and run away.

SCENE 9: People try to kill monster with conventional weapons (they fail), and then eventually research how to kill it with supernatural methods.

SCENE 10: Monster kills two more people, main character and her boyfriend manage to kill it / send it back to the dimension it came from. Movie ends and the film's director goes back to picking up welfare checks.

Viola! You're done! If you're an experienced director, you can try "spicing up" the plot by adding a couple bad guys who get killed midway through the film, but that's only for seasoned pros. Be sure to make one of them fat.

"Shrieker" slides easily into this clichéd mold. The first scene reveals where the rest of the entire movie will take place (inside an abandoned hospital). A couple orderlies or doctors or surgeons or fast food cooks or astronauts or whatever the hell they were supposed to be are killed by some hairy guy in a mask. This is the most we ever see of "The Shrieker", and all further scenes with him are limited to closeups of his rubbery mask. I think "Full Moon Pictures" needs to figure out how to budget their money more wisely so next time they can afford both the monster mask AND the monster suit. It can't be more than a $100 weekend rental; all they need to do is give up the money they would spend that day on heroin.