After his wife informs him that “Demeaning is not having a pot to piss in” (which is good advice for anybody, really) and leaves, and after his friend tries to comfort him by putting an arm on his shoulder and saying “Beer”, a dejected Gordon takes off and starts driving down the highway toward noplace in particular. However, two stupid girls playing in the middle of the road ensure that Gordon will soon be taking a little detour...TO HELL! Or purgatory, I guess. Fuck, I don’t know, the place where he goes doesn’t look like either, it looks more like he’s stuck in an 80’s PC game with blurry unrecognizable objects and cinderblock-sized pixels. After swerving to miss the two brain dead girls, who probably got hit by the next car to come along anyway, Gordon crashes his car and wakes up in the aforementioned CG shithole, surrounded by a group of angry vampires, a missile truck, and a really, REALLY ugly computer-generated fire. The flamboyant, pasty leader of the vampires, who looks like every Nine Inch Nails fan I’ve ever known, instructs all the other vampires/dead guys to “kick his ass!” and then sits there yelling “Come on, beat him up!” Gordon, realizing that he must stop this madman’s maniacal plan to beat him up, grabs a stick off the ground and starts swinging it around while nearby bad guys go flying through the air even when the stick misses by a good five feet. 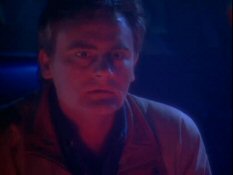 He looks nervous.But don’t worry, Gordon, help is on the way! In the absolute worst CG sequence in the known universe, the idiots from the opening scene burst onto the scene in their blue car, jump over a tree (?) and drive right through another tree since the admin of purgatory was nice enough to enable noclip. The guy in the driver’s seat mows down all the dead guys with a machine gun, since apparently in purgatory a bullet can still kill you but you come back to life ten seconds later. They pull up and let Gordon hop in, then shoot the missile truck a few times and drive away as it explodes. The bad guys try to pursue them in their own car, but Carl cleverly stops them by stomping on the brakes, flipping a bitch and having the guy in the passenger seat shoot the other car a few times. This kills the driver somehow, even though they’re all already dead, and the main evil zombie vampire guy dives out of the car, then watches it while it runs off the road, magically reappears back on the road, runs off the road again and falls off a cliff.

Back at the group’s base, which is cleverly hidden right next to the paved one-lane road that goes through purgatory for a reason I strongly doubt exists, Carl explains to Gordon that he and his band of merry men are in purgatory so they can kill “The Despiser.” Apparently the same thing that got Gordon into purgatory can get him out, so if he’s killed in purgatory he’ll leave and hopefully wake up in a better movie. While they’re talking, a giant bug attacks their lonely little building, but they manage to kill it with a grenade and then run outside screaming like morons. When they get back outside, terror strikes again! More “Shadow Men” drive up and blow up their car with a rocket launcher, then they attempt to run over Gordon. The only thing that stops them is the fact that Gordon suddenly disappears right before impact and instantly reappears back in the real world, laying right next to his smashed car. Apparently his chunky friend Norm had administered CPR and managed to bring him back to life after being dead for 20 minutes, and he casually decides to leave his car there and spend the night at Norm’s house. 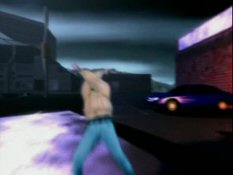 Self-Defense 101: How not to stop a moving car.This begins a very boring stretch of time back in the real world, during which nothing important happens except one thing – some jerk who works for the Despiser shows up, kills Gordon’s wife and decides to hold her hostage in purgatory. To get her back, Gordon devises a foolproof plan – he’ll kill himself to get back to purgatory, but do it in a way that someone will revive him and bring him out of purgatory after he rescues his wife! Brilliant! Being highly uncreative, Gordon decides to kill himself in a car accident exactly like before, only this time he goes through the guardrail of the bridge and plunges into the water, and somehow this transports him and his truck back to purgatory.

After arriving, he goes about the serious business of shooting the troll doll that hung from his rearview mirror, after it came to life and decided to start dancing around and making fun of him for some reason. Having accomplished this, he decides to sleep by the river, and has a dream about his wife floating over the water like a human hovercraft. She tells him “Find your friends…they’re by the river” which is very helpful when there’s a giant fucking river that goes as far as you can see in both directions. Thanks a lot, you bad-direction-giving dead floating whore.

Fortunately Gordon seems to know exactly where she’s talking about, and just like every single important location in the movie, it’s within 100 feet of this one long road. He pulls up to a nearby stone building, where the four gun-wielding tards are frantically gunning down dead guys while screaming incoherently. Sensing that his friends are in trouble, Gordon springs into action! He drives to the nearby parking garage (yes, purgatory has multi-level parking garages with giant neon signs) and calmly grabs his gun and starts slowly walking away while gunfire rings out from the building next door. 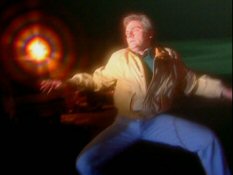 HADOKEN!Even though he was walking in the opposite direction of the other building, he somehow ends up looking at it while his four buddies stiffly run by the windows gunning down undead guys like a shitty Resident Evil game. Gordon, realizing that he’s now in a Resident Evil game, decides that the current problem is really just a stupid puzzle that requires a nonsensical solution! He spots a giant red tower on the roof that’s supported by three cables, and while the other four guys fight for their lives, he takes his time lovingly duct-taping grenades to each of the cables. While he spends several minutes doing that, the four group members run out of ammo and are forced to flee up to the roof.

But don’t worry, good ol’ Gordon has the solution! He ties string to the grenades, pulls the pins simulaneously and blows up the cables, dropping the tower down and forming a bridge to the next rooftop where his buddies are stranded. Wow! The team members all calmly walk across the new bridge, one by one, while a horde of screaming Shadow Men below fire machine guns at them and manage to miss every single shot. All except one, that is – Charlie, the annoying bitch with the exaggerated fake accent, takes too long and gets stuck in the middle while the head Shadow Man catches up to her and starts randomly shooting her in the arms and legs. Charlie responds by glaring at him and kind of wiggling around a little bit, and somehow this causes the entire metal structure to break apart and drop them both a whole 20 feet, which is apparently enough to kill you in purgatory.

Once they escape from…uh, whatever that building was, since it’s never explained what it is or why they were there in the first place, they begin plotting for a final attack on the Despiser. They steal a car from a nearby used car store (yeah, they have those in purgatory too) and stock up on ammo while the Despiser’s dastardly plan is finally revealed – his minions have been pulling up missiles from the earth so they can blow up purgatory! Not only that, but the Despiser only needs two more missiles now! I guess someone somewhere calculated exactly how many missiles it would take to blow up purgatory, and the Despiser happens to be two short. This doesn’t bode well for Gordon and Company, especially since getting those last two missiles won’t be hard at all, considering they grow in the fucking ground.