Overview: That crazy US military is on the loose again, and this time they are using their powers to cover up an alien on a remote island who is out for revenge. A group of marines is sent to the island to deal with the problem and are in turn dealt with themselves, if you know what I mean. Dealt with.

The Case For: There are a lot of bunnies on the island with the alien, so that's cool.

The Case Against: This movie is a terrible example of how not to portray a government conspiracy and alien cover-up. The people who made this must have gotten their inspiration from watching retarded children play with dolls and drool. 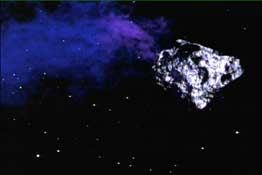 Wow, that's some pretty swank-looking technology that this alien has got going on there.

This is actually the third "Xtro" movie. I am fortunate to not have seen the first two, but the same director is responsible for all three and not much else. I have no idea why the number"3" was not present in the title shot, but I can only assume that the director had some sort of artistic message there that he was trying to communicate to those of us who are less intelligent and are not able to fully grasp his film brilliance.

Something doesn't seem quite right at the very start of this disaster. I think that perhaps it might be the fact that the "space ship" that is seen rocketing through some fire and clouds (presumably Earth's atmosphere) looks like a crumpled-up ball of aluminum foil molded in the rough shape of human genitalia. One would think that if an alien were to travel to Earth across all of those millions of miles of empty space that he would have the technology to make his ship look like something other than a ball of garbage, but hey, what do I know? The ship-thing makes some very convincing explosions for seemingly no reason in mid-air before it speeds to its awaiting doom on the ground. If only it had actually blown up at this point this movie would never have been made and everyone everywhere would have been a lot happier with their lives in general. Oh well, I suppose that you can't win them all, and the fact that this movie exists is definitely proof of that. 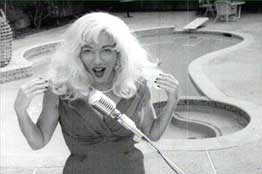 The other thing that might not be quite right with the first few scenes of this movie is the fact that immediately after the space craft scene there are about eight minutes of fake 1950's newsreel footage wherein the director apparently decided that it would be perfectly acceptable to "make it look old and stuff" by turning the picture black and white, putting a bunch of vertical lines in the film, and having people dress up like skanky thrift store versions of Marilyn Monroe. Wow, I didn't know that that is what everything looked like in the 50's. I'm sure glad that I live now! There's also some crazy child who is being hounded by news crews and such because he filmed the alien craft but he is convinced by his child-molester father and the government goons to lie about it. He denies that he saw any such thing like a ball of trash soaring through the sky in a fiery blaze. Poor kid, he looks like the kid from Billy Madison who peed in his pants on the school field trip. Perhaps the government told him that unless he peed in his pants he would be in some serious trouble.

Suddenly, there is a cut to what I assume is supposed to be more or less the present. A filthy, paranoid, bum-looking man is holed up in a cheap motel room and some dykey reporter-lady comes in and starts asking him questions about some photographs that he has sent her (pssst, they're photos of ALIENS). He seems very upset about something... but what could it be? Certainly nothing having to do with aliens.

Reporter: Who do you think is looking for you?
Crazy Man: You name it, they're looking.

Wow, that's a lot of people looking for this guy. I mean, that includes the Shriners, even, and they are not easily distracted from their funny hats and clown cars. It also includes legions of furries, republicans, and people who post naked pictures of themselves on internet forums. If I were this guy I would be terrified as well.

OH NO THERE'S A FLASHBACK NOW! 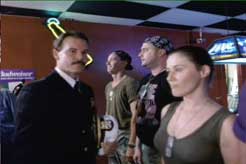 Only the highest-quality soldiers get to go ont he bomb-retrieval mission to Alien Island.

In the middle of a giant warehouse with water all over the floors for some mysterious ALIEN reason there is a Head Honcho Military guy sitting at a desk. Another guy is talking to him about football or something and we soon find out that this man's name is Lt. Martin Kern of the US Marine Corps hut hut hike. They are asking the esteemed Mr. Kern to travel with an elite band of psychopaths and incompetent louts to a remote island on a "bomb disposal" mission. They tell him that it is a very deserted island in the South Pacific and that it was used to house Chinese prisoners back in dubya dubya two. They further tell him that they plan on putting a refueling station on the island and they can't very well have bombs lying around with all of that gasoline, so the US military obviously has to send a bunch of people who have never seen a bomb in their lives to deal with the situation. Lt. Kern is in large and in charge of this group and by that way, this mission is strictly about bombs and has nothing to do with aliens at all. Nothing whatsoever.

Lt. Kern is very excited about his mission with the retard club and he proves as much by telling his superior officer, "I wouldn't trust them with a cigarette lighter, much less a gun." Despite his protests, the team is assembled by the Super Head Honcho Military Captain Guy at a very classy local strip club-type bar place when Mr. Kern attempts to instruct the Marine people to perform simple tasks such as "standing still" and "not acting like stupid imbeciles" but they are unable to perform these tasks. The mission looks like it has a pretty bright future and there is nothing suspicious about assembling a group of losers to disarm bombs! Certainly there is no alien cover-up going on and clearly this mission will be nothing but a glowing success.