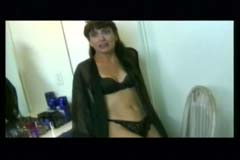 Holy crap! Undergarments! Just as Detective Chinbot finally gets his first solid piece of information, Killbot makes a change of his own. He actually kills a woman who manages to keep her bra on the whole time! Coincidentally, this is also the first time that his victim's breasts are smaller than her head. This is probably why he doesn't give her any of the finesse he used on his previous victims. Yep, no subtle stabbings through the door, here. This time, he just blows her ass up with a rocket launcher. Now, a robot cockroach I can understand, but who the hell sold a rocket launcher to this guy? I would hope that by 2027, we would have come far enough as a society to put a "Do you think you're being constantly raped by Satan" question on the gun permit application form. Anyway, he blows up the woman with a rocket launcher, but then takes the time to dismember her pet dog. It may seem insulting, but that's what she gets for flaunting her normal-sized breasts in the year 2027. 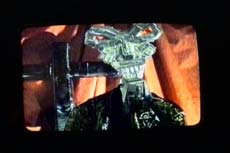 You know, I always thought my salvation would come from a guy with a "Y" for a head.In the process of ripping the dog to pieces, Killbot accidentally throws its head against the TV, which turns on, showing a 24-hour robot televangelist. When Detective Chinbot and Robodoc show up at the crime scene and find the TV on, they figure that the televangelist may have connected to Killbot's religious side. This gives Chinbot an "idear," and they quickly pay the Robovangelist a visit. Despite the fact that he is supposedly broadcasting live twenty-four hours a day, the Robovangelist is patiently waiting in his office, doing nothing when Chinbot and Robodoc arrive. Figure that one out, smart guy!

Killbot, feeling remorseful over having killed a woman with actual breast-sized breasts, breaks into the home of a woman whose breasts easily dwarf any other single part of her anatomy. She is giving herself a facial, complete with cucumber slices over the eyes. Despite being visually impaired by produce, this woman is the first victim to notice Killbot's presence before he even starts trying to kill her. When she screams, the cucumber slices fall off and instantly adhere to the side of the cardboard zeppelins sticking out of her chest. Forget wearing clean underwear; when I die, I just hope I don't have a green salad stuck to my bazoombas (NWS). Is that so much to ask?

At the urging of Detective Chinbot, the Robovangelist goes on the air and denounces killing in general, and Killbot specifically. This has its intended effect, and Killbot calls the show, hoping for salvation. Posing as one of the show's phone operators, Detective Chinbot learns Killbot's location. Now the good detective knows the killer's identity, how he thinks, and where he is, which of course means that he still has no hope in hell of catching him.

Killbot bumps off eight more women, including one with a bow and arrow and one with a fork. One of his victims is actually fully clothed the entire time, but believe me, she'd be more tasteful nude. En route to one of their failed attempts to catch the bizarrely elusive Killbot, Robodoc confesses to Detective Chinbot that he believes Killbot represents the next stage in robot evolution.

Robodoc: "He's the beginning and the end."
Detective Chinbot: "Yeah, the alpher and the omeger." 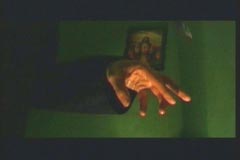 Riiiiight...At last, Killbot is found& by Robodoc. Detective Chinbot is conspicuously elsewhere, probably robo-groping the titanic mams of another murder victim. Robodoc expresses his twisted admiration for Killbot and his evil works. Killbot responds to the praise by beating the hell out of Robodoc, which you'd think he would have seen coming, considering he can see how Killbot thinks, and all. Shortly thereafter, a demonic snake approaches Killbot and offers to turn him into a human, so he can die and go to heaven, or something. He turns one of Killbot's hands to flesh, but Killbot just lops it off, then kills the demon snake. I can't really help you with that one.

Killbot goes to the Robovangelist's office, where Detective Chinbot is waiting for him. They duke it out, Rock 'em Sock 'em Robots style, just as Chinbot always wanted. It's an action-packed fight, made all the more intense by Chinbot's super badass fighting quips, such as: 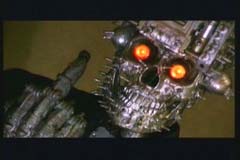 That's classyJust when Chinbot is about to knock Killbot's block off, causing it to spring up on a comically long neck, Killbot shoves him over a conveniently placed ledge in the middle of the Robovangelist's office. Clinging desperately to the edge, because his poorly made robot arms are incapable of bending, and thus unable to hoist him to safety, Detective Chinbot knows his end is near. At the last second, a knife plunges through Killbot's chasis from behind. It's Robodoc, back from the presumed death that no one knew about to save the day!

Unfortunately, Killbot escapes, and goes on to kill three more women. It is then revealed that those last three killings were all in his head, Killbot's final visions as he dies. Man, that cat just loves killing. No two ways about it. 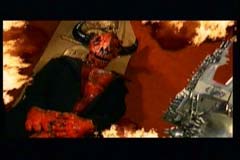 Heeeeey, Satan!Sure enough, Killbot goes to hell. However, the devil (the actual devil, that is, not the robot devil) does not rape him, as he always imagined. Instead, the devil complements Killbot on his fine work and tells him that as a reward, he can return to Earth in any body he wishes. Naturally, he chooses the body of that cop who unsuccessfully hounded him for all those days and ultimately proved to be a minor nuisance in his final hour. Before long, Detective Chinbot finds himself possessed by Killbot's evil robo-soul, compelled to carry out Killbot's odd obsession with killing large-chested women. Chinbot/Killbot breaks into the apartment of a woman with lips like tapeworms and some truly ridiculous bosoms (NWS). I mean, this one is just insane. It looks like she got hit by two asteroids, and frankly, not the sexiest asteroids I've ever seen.


This woman apparently has nothing better to do with her time than to stand around topless, feet shoulder-width apart (as trying to place her feet nipple-width apart would require the use of at least six extra knees), cracking a whip over and over again for no good reason. Chinbot/Killbot kills her with a chainsaw, which is actually fairly impressive considering it means he has to get through the giant meat shields some idiotic surgeon installed on her chest. After the dirty deed is done, Detective Chinbot uses his last ounce of self-control to end the madness by shooting himself in the head. Just before pulling the trigger, he sees a vision of a skinless nun. His last words, and consequently, the last words of the film, are just as eloquent as one would expect: "Ah, blow me sister." Get it? Because he's about to blow his brains out! How do they come up with this stuff!

I'll admit that I have very mixed feelings about this movie. On the one hand, while the robots may move awkwardly and sound like a pack of retards inside a cement mixer, they have a stylish look about them that carries across every single robot character in the movie, and that's something to be proud of. On the other hand, this movie made me actually mad at both big breasts and nudity. And I used to love big breasts and nudity. I have to wonder just how on Earth Clive Cohen convinced so many porn stars to appear in unnamed, non-speaking roles in this movie. Did any of them actually think this was their gateway to legitimate acting? Do you think Fembomb said to herself, "Finally, people will stop seeing me as Fembomb the silicone-based sperm depository and start seeing me as Fembomb the actress! What's that? Can I take my top off? Sure!"


I guess what I'm really wondering is just what Clive Cohen thought his target audience was. Let's see, he combined excessive, almost painful nudity with an endlessly repetitive plot, demonic dream sequences that would make David Lynch scratch his head, and a protagonist who constantly spouts catchphrases that would bore a sixth-grader. So, piecing that together, his ideal viewer is an easily amused autistic savant man-children with an eerie, Nietzsche-like insight into spiritual matters and a fetish for botched cosmetic surgery. Yep, it's destined to be a big seller.