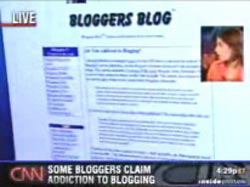 I found this picture while trying to find a logo of blogging and it makes me a little concerned about doing this but I am going ahead with it.Hey guys, I was reading the Internet last Monday a lot because I had the stomach flu. I'm okay now, but on Monday I was really just vegging out big time and watching these really funny cartoons called The Strong Bads. It's this cartoon with a wrestler guy with boxing gloves and he reads emails, which I could identify with as a reader of emails myself. He makes a bunch of funny comments and gets into some hijinx with his friends. It's pretty funny, you guys should check it out. I don't remember the website though, I think it's like Strongbad.com.

So after I watched all those I was just searching around on the Internet looking for something to do and I found out about blogs. I had heard Wolf Blitzer talking about them on CNN so I thought I would check them out. So it turns out blogs are web pages that are very casual and just like a dude chilling out and writing about whatever. I thought that sounded like a pretty cool idea and I found a bunch of cool blogs.

Then I got to thinking about blogs and I thought it might be cool to write a blog page for Something Awful. Then I remembered I told Lowtax I would write another movie review since everybody seemed to like my Conan movie review. That's when real inspiration hit me: I could do both at the same time!

That's where Steve's Movie Reviews Blog was born and here we are now. Those paragraphs you just read leading up to this one? Those are bloggings and this is a blog too, but it's a movie review blog. Pretty cool, huh?

Okay, so I rented a bunch of sweet videos from Blockbuster and I didn't have time to watch all of them all the way through, mostly because I ended up watching Krull twice, but here is where we go into the movie blogging part of this blog page. So, like, the way it's going to work is that I'm going to blog about these sweet videos I rented and as I do that I will also be reviewing them. I know it sounds a little awkward, but I practiced this earlier and it works. Trust me.

Alright, so this blog I'm going to be writing bloggings for Krull, Red Sonja, Jackass Number Two and Miami Vice. All of these movies are at least pretty good and one of them is really excellent. See if you can guess which one is excellent.

Krull is easily in my top ten movies of all time. It's basically like the coolest aspects of a movie like Beastmaster (a mighty hero, hot babes and incredible companions) meet the coolest aspects of a movie like Excalibur (an awesome magical weapon) and then you combine that with a really sweet 1980s science fiction movie (goopy aliens in suits of armor with laser guns). It's a lot like a good Gor movie in many ways.

The movie starts out with this giant mountain spaceship flying through space. It lands on this real dark and gloomy planet called Krull and immediately these aliens run out and start attacking people with these cool swords that can shoot laser beams from the other end. This Robin Hood looking prince decides to marry this hot princess babe to unite their kingdoms to fight against the alien overlord guy. The alien overlord is this evil looking giant foggy alien dude called The Beast. Possible Bible reference? I wouldn't be surprised, this movie explores some pretty deep themes like dopplegangers.

So the prince and princess are getting ready to get hitched and the beast sends his alien soldiers in and kills all the guards and kidnaps the princess. The evil alien dude wants to have an evil baby with the princess or something wild like that. It's all very Conan, only with aliens.

The prince isn't about to give up on his hot babe that easy. He embarks on this quest that has him seeking information from all sorts of cool wizards and they tell him he has to recover the Glaive. The Glaive is like just about the only thing that can kill the Beast and it's also the coolest weapon ever, maybe second only to Freddy's claws. It's basically this super sharp giant throwing star that looks like a Nazi symbol made out of knives and it acts like a magical boomerang.

One last thing to put in the blog about this: Krull probably has the hottest babe of any movie. I don't know her name but, man, I remember seeing this on TBS when I was like seven and I think that was the day I got my first boner.