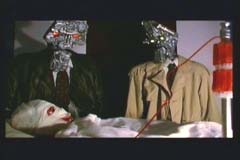 Chinbot: "Just the facts, ma'am." Victim: "BLAAARGHLGHRGG!"At last, a break arrives in the case. Detective Chinbot is amazed to discover that despite her face-stabbage, the last victim is still mildly alive. He tries to get some information out of her, but she refuses to say a word and tells him to get lost. So, essentially her continued breathing contributes nothing to this movie whatsoever. I can't say it's that much of a pity to see Killbot come back and finish the job by jamming a corkscrew in her head.

Killbot's spree of, well, killing continues unabated for a while. It gets to the point where - and I'm being totally serious here - I just don't want to see boobs anymore. The appearance of boobs always heralds an annoying, and often quite avoidable death. In this movie, boobs are nothing more than silicone-inflated sacs of doom, topped with perpetually erect nipples of imminent destruction. Every now and again, to break up the monotony, Killbot has some sort of freaky religious episode, such as when a bible grows a mouth and tells him to go fuck himself.

All this time, Detective Chinbot just can't get any closer to finding the killer. He takes out his robo-frustrations by beating up a virtual simulation of Killbot, Rock 'em Sock 'em Robots-style. It's the most proactive thing he's done thus far, so it's a nice change, but it's nothing compared to the giant robotic monkey wrench Clive Cohen throws us next.

We see a woman in her apartment and, wait for it& she actually has clothes on! Yet another surprise from the world of tomorrow! Yep, just a normal, big-titted woman standing around in her apartment, nothing to see here, and - oh, wait, she strips and starts rubbing her breasts. Yep, okay, she's doomed. 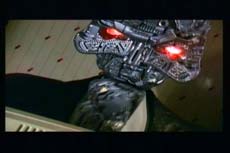 "I'm a loose cannon, ChiefJudgeMayorbot."Detective Chinbot meets with his Grumpy Chiefbot, or Grumpy Judgebot, or Grumpy Mayorbot. I don't know which. It really doesn't make a difference. Between his dopey Georgia accent, the constant humming and whirring that happens whenever one of the robots moves (including when they open and close their mouths), and the fact that none of the robots in this movie have the ability to say words that end in "a" (i.e., "Yep, he's an enigmer."), Grumpy ChiefJudgeMayorbot is totally incomprehensible. One thing is clear, though - he's grumpy. He's definitely grumpy about something. Probably something to do with Killbot, and Detective Chinbot's lack of arresting thereof.

Killbot stumbles upon yet another silicone supply depot - I mean, woman, and this one, too, is clothed. At least, for a while. She begins working out in a tank top, but after a few moments, she takes it off and starts doing jumping jacks topless. This movie is opening my eyes to a whole secret world of what women do when they think no one's watching. Evidently, they all love to be topless during any and all activities, including ones where toplessness actually gets in their way. I knew it! 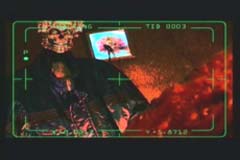 Ooh, Robovision!After Detective Chinbot fails to catch up with Killbot yet again, Robodoc tells him that he can patch him into Killbot's robo-brain, allowing him to see what Killbot is thinking. Thanks for mentioning that earlier, Robodoc. A killer is on the loose, you can see into his brain, and you only bothered to mention it now? You know, just because the victims all look like the stars of a plastic surgeon's blooper reel doesn't mean they don't have feelings, too! Well, no, I guess it does. Regardless, Detective Chinbot jacks in to the killer's mind. Evidently, Killbot think he's in hell, being constantly raped by Satan. That might shed some light on why he's killing people, but it does raise a serious question - where the hell is Satan sticking it? Killbot is basically a bunch of aluminum rectangles with a couple of red light bulbs for eyes. There is nothing in that description that I would want to put my devil-wang into.

Since Robodoc has proven himself to be absolutely useless for anything else, Detective Chinbot uses him to help blow off some steam by forcing him to fence with him. Yep, like all great detectives, Chinbot relaxes by slapping plastic swords with an annoying robotic doctor. Robodoc finds this at least as humiliating as it looks, and afterwards asks: 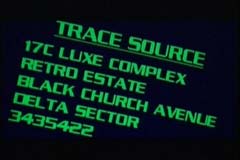 Seriously, you'd think this would be helpful. Stupid robots.So there you go. After Killbot offs another woman, who was blowing bubbles topless, which is pretty much just begging to be killed, Detective Chinbot has a revelation. All of the victims have, and I quote, "borken the lorr," meaning Killbot must be hacking the police criminal database to find his next target. Chinbot tracks Killbot through the computer system, and sure enough, finds him hacking into the database. Although Chinbot now knows who the next victim will be, he still gets there too late, and a woman who had been brushing her hair topless pays the price. Just to recap, Chinbot knew who the killer was and where he would be striking next, and still managed to get there late enough for Killbot to kill the woman, mutilate the corpse, kill her pet, and leave. In the future, neither the police nor robotic pets will be able to protect you. You should probably just get $5.95 breast implants and kill yourself now.

Worse yet, Detective Chinbot asserts that Killbot doesn't need to hack the database anymore - he must have downloaded the whole thing, and what's more, Killbot knows that Chinbot found out about the hacking, so the element of surprise is totally gone. This raises a questions, such as, if Killbot could download the database whenever he wanted, why didn't he just do it the first time he hacked in? Why would he have downloaded it this one specific time, while he knew the police were watching him? Furthermore, how did he know the police were watching at all? And what the hell is "borking the lorr?"

Finally, Detective Chinbot and Robodoc get a break when they find a robot mechanic who once worked on Killbot. Now, you're probably asking yourself, "when he says 'robot mechanic,' does he mean a mechanic who works on robots, or a robot who is employed as a mechanic?" Well, in this case I mean both, so take your grammatical quandary and shove it, nerd. This mechanic staunchly refuses to divulge any of the details of the repairs he did to Killbot until he is, you know, asked twice. Then he spills the robo-beans like it's his Prime Directive. Apparently, while doing some routine maintenance - heck, a good robot needs a tune-up every three thousand miles or six stabbed porn stars - the mechanic took it upon himself to install a serial killing/religious fanaticism/Necronomicon combo package. Usually that costs extra, but he was feeling generous. Detective Chinbot arrests the mechanic, then thinks better of it, and just blows him up.