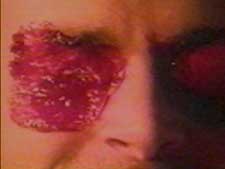 If he could see how stupid he looks, he never would have pulled out his eyes. But he can't because he pulled out his eyes. Oh, the irony!Marty arrives home to find the doll on a string laying on the floor. He kicks it aside and goes about his business. The, he notices the doll is now on a shelf. The doll lunges at him (read: he picks it up and puts it on his neck), and the two duke it out. Marty manages to gain the upper hand, because he is an adult human and it's a goddamn doll. After pummeling it viscously, Marty drowns the doll in the sink. Let that be a lesson to you - possessed inanimate objects need to breathe oxygen, even if their tiny plastic bodies don't contain lungs or any sort of respiratory system to begin with. In any event, Marty tosses the doll in a garbage can outside, which is obviously the safest place for berserk children's toys. After a stressful day of talking to blind people and drowning plastic, Marty gets into a bath. There, he has horrifying visions of fat people waving their hands through smoke. He also trips on his way out of the bathtub. What a loser. 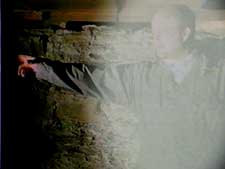 Wait, that ghost's arm crossed out of the graphic. Well, someone really dropped the ball on this one!

Back at his typewriter, Marty notices a strange light coming his way. A door to the room opens, and a ghost of a portly guy in his thirties enters. The ghost is done in sort of an interesting way, special effects-wise. And, of course, by "interesting" I mean "bad." The Polonia brothers used a mixing effect that is fairly standard on editing boards these days. I forget the technical name of the effect, so we'll call it the Crappy Ghost Circle. News reports on paranormal events use it all the time. Basically, it creates an oval of whiteness on the screen, so that anyone or anything in that space appears deathly pale and otherworldly. It can be moved up and down on the screen, as well as widened or thinned as needed without any trouble.

Unfortunately, the editing geniuses at work on "The House That Screamed" didn't feel like putting in the effort to making the Crappy Ghost Circle stick with the ghost. The result is that the ghost's body parts frequently leave the Crappy Ghost Circle, and therefore appear normal, and Marty frequently crosses into the Crappy Ghost Circle, therefore appearing ghostly. Anyway, the ghost tells Marty that he died during a war, but he can't remember which one. He elaborates, saying it was the war where "brother fought against brother." Marty asks is he means the Civil War, and the ghost summons up some ancient stock footage (the world was black and white back in those days) and replies, "Yeah, that one." So, now that the ghost's credibility and ethereal presence is utterly ruined, like everything the Polonia brothers touch, he continues to talk about the evil spirits in the house. He finally tells Marty, "You have to go into the belly of the beast if you want to understand the house that screams." You like that? That's where the title comes from! Now the whole movie makes perfect sense! Oh shit, I think I've just gone insane.

The ghost takes off, but just then Death appears and walks through a wall. Not to be outdone, Marty grabs a pickaxe, which he always has handy - he's a writer, after all - and busts through the wall. Well, "busts through the wall" might be a bit of an overstatement. He swings the pickaxe, then slows it down to a crawl as he gets closer to the wall. Wouldn't want to damage the director's house, now. The shot switches to behind a flimsy cardboard wall, which Marty breaks through like the muscle man he is. Marty discovers a hidden room (another part of the basement), where he sees himself laying in a coffin. The ghost appears and explains that Marty has to kill himself to set the spirits free. Marty makes a break for it. He runs out of the house and collapses on the lawn. 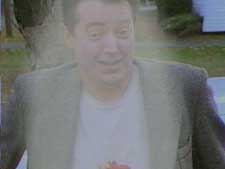 Day 4 - Marty gets off the damn lawn. He goes back inside and calls the realtor, looking for Kilpatrick. The man who picks up the phone tells him that Kilpatrick died two years ago in that very house when he fell down the basement stairs. Marty hangs up, prompting Kilpatrick himself to pull up in the driveway. Marty grabs a gun, which I'm guessing he keeps in case of writer's block, goes back outside, and shoots Kilpatrick many, many times. Kilpatrick shrugs it off, and now he, too, has a Crappy Ghost Circle. He's not scary, though, because it's daytime and nothing is fucking scary in broad daylight. At least there are no rain sounds. Kilpatrick tells Marty to kill himself. Marty spins in a circle, screaming. When he stops, it's night. That would tucker anyone out. He rushes back into the house, because he's an idiot. The phone rings. It's Sal, who tells Marty that the publisher doesn't want a ghost story, and that he should "start thinking about Feeders 4," which is the most frightening moment in the movie. Marty hangs up while all the bad sound effects in the movie play at once. Marty squeezes his ears until he has blood on his hands. I think it is supposed to look like he tore his ears off, but he did a piss poor job of it, because he still has ears. He then plucks his eyes out, which for some reason sounds like Coke cans crunching. A long line of ghosts walk out of the house, which explains the suspiciously large cast despite the movie only having four real characters. Marty falls to his knees and screams like a fourteen year old girl. The little boy ghost - probably the ghost of his son - leads him into the coffin in the basement. A ghost stands in a window of the house, while the Civil War ghost recaps one of his earlier lines, "And the cycle will begin again."

This movie is so far beyond terrible that words escape me. If there is one redeeming feature, it's that the acting is, on the whole, not as bad as we've seen from other Polonia films. That's not to say the acting is good, or even remotely acceptable. I'm just saying that there has been worse. I doubt, however, that there has been worse sound quality, writing, or direction. The majority of the idea in "The House That Screamed" are horribly plagiarized, and the original ideas are godawful. I am convinced that every Polonia brothers movie is a sign of the apocalypse. I don't think that this is their worst effort, but I would say that I'd rather design a robot whose sole function is to grind human testicles and volunteer myself as its first test subject than watch it again. Judge accordingly.