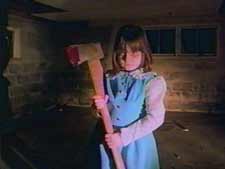 A young Lizzie Borden prepares to get even with her parents for making her star in horrible movies.

By now you're probably wondering, "Gee, this movie sucks and all, but where are the ludicrously fake-looking severed heads and pointless naked people?" Here they are! John and Mark must have thought that a transition from the bald guy in the last scene to the same bald guy in the next scene was a little to cerebral for their audience, so they threw in a slew of random images of severed heads. They look about as realistic as Michael Jackson's head, and are far less frightening. There are a few quick shots of a little girl holding an axe and a boy having nose sex with the neck stump of another severed head. The dot on this exclamation point of unnecessary footage is a woman in red underwear writhing and stripping in front of a black background. No severed heads there, just a woman in red underwear rubbing herself for some reason.

On that note, we jump to a buzzing alarm clock which reads 7:39. Between "The House That Screamed" and "Mr. Ice Cream Man," I am now convinced that no one in a Dead Alive production is allowed to set their alarm clock for a sensible time. The bald guy - Marty Beck - gets out of bed and goes to the bathroom. If we've learned anything from awful horror movies, it's that bathrooms serve only two purposes. If the character is a woman, she will get naked, rub her breasts for a while, and probably get killed. If the character is male, he will have flashbacks. Being male, Marty has not one, but two flashbacks. But not just any flashbacks - pathetically edited flashbacks! The first is of his little son, the second is of his sinfully ugly wife. I think that the wife is played by Donna from "Feeders," but there's no way to be certain, because the end credits don't include a list of cast and characters. In fact, I only know the names of four of the characters in the movie, and only one of them is actually important. 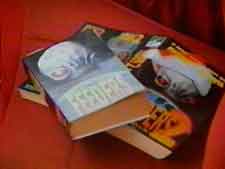 The scariest shot in the movie.

Marty goes outside and packs luggage into his car while a crappy piano-esque midi plays. We cut to Marty driving, and he decides to take a look at his map. While the map is blocking his view, the car swerves across the road. Usually, that sort of device is employed to make a character take a wrong road and end up in some freaky small town inhabited by cultists and zombies, or at least get in a close call with a passing truck. In this case, Marty tosses his map out the window and rights the car without any consequences whatsoever. A big fat hooray for that. He does end up in a small town, but it was his destination, so it's not that exciting. He pulls up alongside a local bumpkin who recognizes him as the "famous horror writer Marty Beck." And just what are the titles of Marty's chilling works? Brace yourself for this: Feeders, Feeders 2, and Feeders 3. Yeehaw. Marty gets directions to the local realtor's office from the bumpkin, then speeds off, honking for no reason whatsoever. Now, if you'll excuse me, I'm going to go purge the thought of a third "Feeders" movie from my mind by bashing my head against a cinder block

Much better. There is a brief (read: painfully long) montage of shots from the town set to the same horrendous synthesizer garbage that underscored both "Feeders" films. At the realtor's office Marty meets with Mr. Kilpatrick. I'm just guessing on that name, because every time anyone says it, the microphones (assuming they were using some) clip horribly. It's almost ironic, as all of the lines that Kilpatrick says also clip horribly. On second thought, the sound in this movie blows. Marty demands to stay in the supposedly haunted house in town, which he says he has researched extensively. Kilpatrick is hesitant at first, but he changes his mind when Marty tells him that he's a writer. I tried the same tactic earlier today. I asked a girl to sleep with me. She was hesitant at first, but when I told her I was a writer she Maced me something fierce. Damn you, Polonia brothers! You've lied to me again!

Marty and Kilpatrick drive to the house, where Kilpatrick asks if Marty knows about the "accidents" that happened there. The scene of the girl shooting herself replays. In realtor-speak, one suicide equals multiple "accidents." Inside, every singly piece of furniture has a sheet over it. As Kilpatrick takes Marty on a tour of the house, their conversation cuts out in favor of heavy breathing, a heartbeat, and cheesy synthesizer crap that tries to give a spooky atmosphere. The problem is, it's daytime and nothing is fucking scary in broad daylight. Marty decides to take the house, so the two men get back in the car, in a shot that goes on for a good minute longer than it could possibly need to. As they drive away, a curtain falls over a window of the house, as if dropped by an unseen hand. It would be a good shot for a ridiculously low budget project like this one, except that we already know the house is haunted, so curtains moving aren't really going to elicit any screams. Also, it's daytime, and nothing is fucking scary in broad daylight.

Marty signs the lease on the house while an incredibly irritating, high-pitched whine drones on and on for a good five minutes of my life that I'll never get back. Ten, if you consider that I've seen this movie twice. Marty stops at a gas station on the way back to the house. This is no ordinary gas station, mind you, this is a gas station attended by the one and only John "Jhon" Polonia himself! In addition to producing, directing, and writing the movie, Jhon also amazes audiences with his constant inability to act in the scenes that he produced, directed, and wrote. Jon is suspicious of Marty, whom he has never met, and asks where he's staying. When he finds out it's the haunted house, there is a pause that lasts long enough to get up and go to the bathroom before Jawn lets out the single most fake laugh ever captured on film. Anyone who actually laughs like that in real life should have to speak through computerized voice boxes at all times or be shot. Joughn's scene is mercifully short, but he'll be back for no real reason later on. In the meantime, Marty moves into his new house. The screen flashes, telling us that this is - 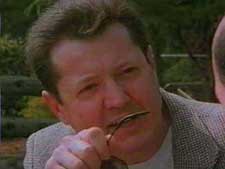 Kilpatrick, having had nothing to eat in upward of fifteen minutes, prepares to eat his sunglasses.

Day 1 - Marty unpacks his belongings and gets comfortable in the house, which for some reason involves walking past a random church. While setting up his bathroom supplies, a severed head appears in the mirror, complete with electric seagull sound (so be surprised, dammit!), but he doesn't notice it because he's in the bathroom, which means he's getting ready for a flashback. This one is actually delayed for a bit, though. First, he takes the sheets off of the furniture. There are enough spare sheets in that house to keep a large dormitory in fresh linen until 2006. He also sets up his typewriter and begins to type. We cut to Marty sitting in a graveyard, sketching a cover for his new book, Terror House. The camera goes into color negative mode, so there's evil afoot. Evil, in this instance, is Death. That's right, the Grim Reaper. He's not scary though, because it's daytime and nothing is fucking scary in broad daylight.

Marty sees Death, so he goes running for cover. He picks a good, secure spot, by which I mean a wide open space, but it's too late! Death is upon him! That's what he gets for hanging out in a graveyard. That's Death's hood, yo. We suddenly cut back to the house, where Marty pulls his latest page from the typewriter. Ha ha! It was all in his writing! He's really fine. Shit. Well, at least the flashbacks finally get here. First, Marty fondly reminisces about having a social worker-worthy argument with his lard-addled fatsack of a wife in front of his small child. From the quality of her acting, I'd say she's definitely Donna from "Feeders." Then, he muses over the time that his wife fell asleep with a cigarette in her hand. Note that I didn't say it was a lit cigarette. It was most distinctly not. But the house burned down anyway. We saw that flashback earlier, but now we get to see it again. And thus, the Polonia's eke ever closer to that ninety-minute mark where they can call this a full-length movie without having to come up with new footage.