The Follies of Al Pacino

For the past two decades, Al Pacino has played high-volume Al Pacino caricatures. This approach resulted in a ludicrous Oscar win for Scent of a Woman, an obnoxiously loud film that didn't help viewers understand his blind curmudgeon so much as it made them envy the deaf, who wouldn't have to hear him bellow "Hoo-wah!" During Righteous Kill and 88 Minutes, which would be the worst movies of his career if it weren't for a Gigli cameo, Pacino gives his scorched vocal chords a rest, which would be a welcome development except a) these desperate characters could've actually used the manic urgency b) even if he'd given the best performances of his career, these films still couldn't survive Jon Avnet's disastrous direction. A Righteous Kill spoiler follows, but it's nothing the movie doesn't blatantly reveal within the first few minutes. 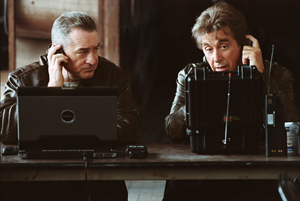 De Niro and Pacino place furious calls to their agents.Even given Pacino's screaming decline and Robert De Niro's recent contentment with safe comedies, loyal fans figured Righteous Kill, which reunites the two legends for the first time since 1995's Heat, might feature some decent action. For anyone who has seen 88 Minutes, which completed its short cycle from theatrical release to DVD this week, that hope vanishes when the words "A Jon Avnet film" appear during the opening credits. For the wise millions who avoided that debacle, optimism dies when someone shoots a skateboarding teenage pimp named Rambo (possibly the result of disposable villain Mad Libs), then leaves a note on the corpse that reads in part "Now someone else must slap his whore/his heart is stopped, he breathes no more." Later, the same someone shoves a sonnet ("the old man who the children trust/unable to control his lust") into a dead pedophile priest's ass. Poets: The vigilantes of the writing world.

We're not yet sure who to thank for the scum extermination/blame for the shitty prose, at least using visual evidence, because Avnet films this slaying, and most of the ones that follow, from an angle that obscures the perpetrator. Directors only do this when they're trying to keep the killer's identity secret, and since the movie begins with grainy De Niro confession footage, it's safe to assume he's not guilty, because then what would be the fucking point? De Niro's Detective Thomas Cowan goes by Turk, while Pacino's David Fisk answers to Rooster, nicknames that exist primarily to make the audience forget that during the opening voiceover, De Niro identifies himself as Fisk. Yes, Righteous Kill blows its stupid sub-Saw twist within the first few seconds, at least for anyone meticulous enough to pluck the main character's monikers from the flood of idiotic cop banter.

To spoil any suspense for viewers who might have missed the clumsy name bungling, Avnet immediately reduces the list of possible suspects to two, Pacino and De Niro. Turk's narration details how he/Fisk selected targets for vigilante justice, starting with a child rapist who evaded prison time due to fraudulent testimony. Turk and Rooster subsequently go through the motions of investigating crimes that one of them committed, with victims culled entirely from their own case files. John Leguizamo, who starts dismaying viewers before Righteous Kill even begins with the mirth-extinguishing trailer for his upcoming craptacular Nothing Like the Holidays, plays one of the idiot cops whose suspicions remain unaroused by this dubious situation; Donnie Wahlberg, who utters mind-boggling inanities like "Is it killing time, or is he just killing time?", depicts the other. 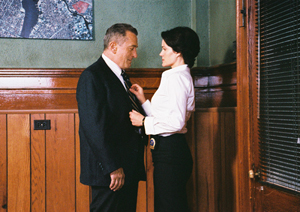 'Wake up, Turk! It's time for a fake rape!'As for the rest of the supporting cast, 50 Cent (as the drug dealer Spider) pronounces his lines so incoherently that Pacino must've thought he'd been reunited with Mumbles from Dick Tracy. However, in a rare moment of enunciation, he perfectly summarizes the film's happenings: "There is the dumb, and there is dumber, and this is the motherfucking dumbest." Carla Gugino's Karen Corelli (Turk's casual fuck buddy) enjoys staged rapes, and moans orgasmically at descriptions of police brutality. She's later raped for real, apparently just to demonstrate that rape fetishists don't enjoy the actual act. Brian Dennehy plays the Scowling Cop Boss Who Wants Answers, as he has in many TV movies that were undoubtedly better than this bullshit.

Avnet tries to keep the audience interested, or at least conscious, by using rapid-fire cutaways, split screens, even a scene where the actors bounce around the picture like a DVD screen saver. Pacino escapes from his sanity harness during an ostensibly serious conversation with Dennehy, during which he a) laughs with his tongue flapping out of his mouth, as if he were an epileptic clown b) makes a sound that roughly resembles "boopity-boopity-bump-bump" c) somehow triggers sappy piano music by saying "Turk cares about people." Despite these valiant efforts, Righteous Kill feels like every generic cop movie ever made, only much worse.

Similarly, the previous Pacino/Avnet collaboration 88 Minutes takes the serial-killer genre to unprecedented depths of incompetence. It demonstrates its pointlessness during the opening sequence, which makes a huge deal out of establishing that the impending murder takes place on the day after Princess Diana's death, for no apparent reason. The victim's final unmutilated moments are soundtracked by the Backstreet Boys' "Quit Playing Games with My Heart," again proving that it's totally 1997. You get the feeling this film sat on the shelf for a while. Anyway, someone strings up a girl with ropes and cables before butchering her with a scalpel. 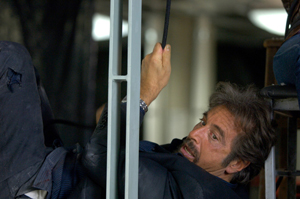 Al Pacino's hair length changes drastically within this 88-minute span.Pacino's Dr. Gramm, a Seattle-based 'forensic psychiatrist,' is a celebrity who's recognized on the street. (Feel free to brainstorm for any non-fictional forensics workers you could identify if they were right in front of you, wearing a name tag and dusting you for prints.) During the pulley-stabbing trial, he fingers slate-eyed psycho Jon Forster, who ominously says "tick, tock, doc, tick, tock" when he's sentenced to death. Apparently Gramm wasn't paying attention, because when someone calls on the day of Forster's scheduled execution, tells him he has 88 minutes to live, and concludes the call with "tick, tock," he wonders aloud "who the hell is this?"

Gramm has several options. If this were a romantic comedy, he could spend those 88 minutes learning to live and love again before accepting his bittersweet demise. Given that this is supposed to be a thriller, I suppose it wouldn't be too action-packed if he used widely available police resources to spend the next 88 minutes in a secure location. However, he could at least show enthusiasm for solving his own prophesied murder. Instead, he heads to a college campus, where he lectures at a leisurely pace. (Actresses ranging in age from 33 to 35 populate his class: Either they're graduate students or extremely unconvincing co-eds.) When he finds "76 minutes to live" scribbled on the overhead projector, Gramm takes time to wipe the glass clean. When he sees "72 minutes to live" scrawled on his car, he seriously says "oh, OK" with casual bemusement. Histrionic Pacino had grown tiresome, but its seems like he chose a strange role to perform while under heavy sedation.