An asteroid pushes the Earth closer to the Sun, making everything get kind of warm, and then nothing happens. At all. Well, okay, this happens:

A perfectly good shootout is rudely interrupted by the Coolmobile - a Ford Explorer with a bunch of random tubes and tinfoil all over it that we guess is somehow supposed to shield its passengers from the mildly uncomfortable heat wave Worldwide Total Planetary Global Earth Meltdown Apocalypse. 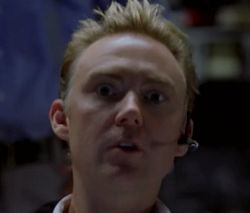 Vanilla Ice’s long-lost twin, Edward Nort(n)onBut that's it.  Casper shows off his dramatic range in this one as a loose cannon cop who plays by his own rules, rules which mostly involve not doing or saying anything interesting or entertaining.

0.5KMPHS is first and foremost an Asylum picture, which is pretty much all you need to know going in. For those not familiar, Asylum is a proud member of that most despicable, boring, and least interesting/original phylum of scum scrapings you can dredge up from the bottom of the movie badness barrel: they make bad movies on purpose. Badly. They're bad at making bad movies. Yes, they flush truckload after truckload of perfectly good money down the proverbial shitter over and over (and over) attempting to make weak, third-rate wannabe 'spoofs' of popular movies that already sucked just fine on their own.

We bet Casper would rather have actual Vietnam flashbacks than remember his time starring in this one.Why? Who the hell knows. Because they're colossal idiots, most likely. Idiots throwing a bunch of money that some even bigger idiots keep giving them at a bunch of other idiots to act out idiotic ideas in a painfully idiotic search for that fabled "so bad it's good" aesthetic vibe, which they of course universally fail to achieve in every way (and always will). Because they're so, so goddamn bad at it. Their bad movies are bad in only the most boring and sad little ways and there is not a single redeeming reason to watch, discuss, or think about them ever. So naturally we decided to do all three of those things, because we're the biggest idiots of all, so here we are.

We'll forgive our good buddy Casper for appearing in this one, because from the look of his scraggly salt 'n' pepper hobo beard, he was probably eating out of dumpsters for a couple weeks before he turned up on Asylum's doorstep with a handle of Banker's Club gin and a mouthful of shoe leather[2].

[2] And we'll forgive ourselves because we'll never do a whole review of any of their stupid movies.