Adventures of Thunderstorm: Return of Thor

Overview: Thor meets Iron Man and they have a socially-retarded baby who is just different enough to avoid being sued into oblivion over copyright (not that Marvel would be able to recoup more than about $4.75 and a heavily used bong from these guys).

The Case For: If you hate children and want to ruin their lives, show them this. Alternately, if your children are really sarcastic robots who like making incisive comments about movies, they might actually enjoy this in a sick sort of way.

The Case Against: Acting so hammy you'll never get the taste of cloves out of your mouth again; everything else so terrible and ill-conceived that just the existence of this movie ruins all of Norse mythology, comic books, and Canada by proxy.

Trying to write about this movie is like trying to climb Mount Everest with flippers covered in vaseline and a Sherpa who's got a sizable bet on your body never being found. But we already had to watch the goddamn thing, so what the hell:

Adventures of the Return of the Rise of Thunder Thor is an uncomfortable eulogy at the funeral of good taste. It's like shooting self-awareness in the back of the head and rolling it into a mass grave along with the cold, lifeless corpses of dignity, shame, and talent. Watching this movie is like punching yourself in the fucking brain again and again and again until your skull looks like a deflated football leaking strawberry yogurt.

It's the unloveable misshapen shit-baby of Brett Kelly, and perhaps more importantly, "Phase 4 Films", the roving band of Canadian miscreants whose sole purpose for existing is to salt the proverbial Earth of indie filmmaking, ensuring that no venture capitalist with a semi-tenuous grasp on reality will even dream of funding a production involving filthy snow people ever again after seeing it could turn out like this. At least there's always the Canadian government, which will fund even the worst of cinematic atrocities in exchange for a liberal sprinkling of hosers mumbling 'aboot's and 'eh's into their Tim Hortons coffee in every scene. Now, before you go thinking we're just a couple self-hating Canucks, or that we're just being hyperbolic here, there's something we think you should see:

"Wait a minute," you're saying, "this movie must be great! That was a great thing I just saw, and the movie it's from is probably so good!?!" Think again dummy, because that was all of the good parts in the movie already, and also we artificially improved it with smooth jazz, which as we all know makes everything better. Now, let's talk about acting. We've made "dinner theater" jokes about bad acting before, but the bad guys in this are so hammy you can practically smell the canned pineapple rings. Case in point, this guy who is literally anime incarnate:

If you think you or someone you know might have consumed too much Anime, seek medical help immediately. Symptoms of Anime overdose include slurring, spastic movements, ocular trianglification, low-budget backdrops, having strong opinions about dubs, and an acute craving for Koala's March cookies. If you are more than 6 months pregnant, ask a doctor before taking Anime, as it has been known to cause birth defects, including Johnson's-Kawaiine syndrome and severe Pikachuism. 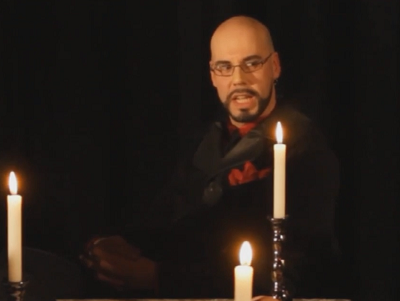 Get a Loki at this fuckin' guy When he's not busy melodramatically sipping things that look like wine (but aren't because he "hate[s] the taste") in the dark, appraising katanas on Youtube, or missing shots at point-blank range, this one-man trenchcoat mafia likes to run around murdering people with the geekiest/least washed fandom/evil apocalypse cult in the land in search of some stupid artifact they can use to kickstart Ragnarok because they think it'll be really cool or something.