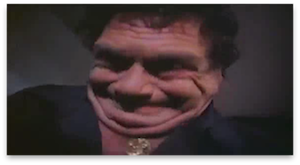 Speaking of the whole crab, we should mention that the entire "plot" such as it is revolves around Jackie's righteous anger that his wife will only cook him fancy, gourmet meals, like the whole crabs which he has in his lunchbox for like a month, because the ship from Deadliest Catch capsized in their backyard maybe. The last straw comes when she tries to serve him chicken cordon-bleu. Yes, that's right, a big chunk of meat stuffed with cheese and bacon, definitely a frou-frou European delicacy that no blue-collar American would ever be caught dead eating. Anyway, this leads to a spectacularly stupid murder scene, after which Jackie finally gets to eat the bologna sandwich he had been dreaming of, and also he becomes a cannibal and starts luring hookers to his house because the movie would have only been like 20 minutes long otherwise.

There's probably someone out there who would try to defend Microwave Massacre as a "horror parody" or something like that, and we're going to go ahead and pre-emptively call them full of shit. This movie is a parody in the same way that a fat guy in a parking garage elevator is an astronaut. Of course, it's pretty obvious from the staggering density of open-mic-between a Red Lobster-and-a-Hooters-caliber jokes that this wasn't intended to be a psychological thriller. On the other hand, "parody" implies some awareness of the actual thing that you're poking fun at. None of the Komedy (100% comedy-based comedy substitute) in here has anything to do with horror or slasher tropes. People are constantly strangled to death about as easily as a toddler in an iron lung smoking a drugstore cigar through a respirator, whole bodies become oompa-loompa sized inside the rarely-seen eponymous Microwave, and, at its nadir, our personal favorite, even subjected to death by funky sandwich. It's like watching 2 hours of somebody making horrible, unfunny in-joke references to something that doesn't even exist except inside their own insane, delusional minds. Fortunately for you, we've distilled it down to about 2 minutes:

We could go on and on about the delightful supporting cast, like the flaming gay stereotype shirtless construction worker who went on to found the Village People, or the neighbor who uses a vibrator to plant chrysanthemums in her yard, but the real star of this picture is of course His Wife's Incredibly Fake Papier-Mache Severed Head. After Jackie gets killed by the microwave short-circuiting his pacemaker, HWIFPMSH goes on to consume his soul and grow to the size of a hot-air balloon, and then floats away to begin a robust and critically acclaimed Hollywood career. Her big break came when she was cast as the star of a little film called Zardoz, floating around with Sean Connery in her mouth, truly on top of the world. Sadly, she died in a special-effects tragedy during the filming, cutting a promising acting career short. Truly, you will be missed; RIP, HWIFPMSH.