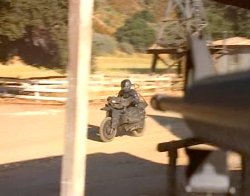 Coming soon: Murdercycle - The FPS! PC Gamer hails it as "a masterpiece of the art form!"While Wood continues puttering around, outside Dr. Lee suddenly feels a mysterious presence. "Spider-sense tingling," one of the marines quips, because referencing comic book is the only way the nerd screenwriter could get an idea across. Kirby asks Dr. Lee what she is sensing, and she replies with one of the least succinct lines in modern cinema:

While everyone tries to decipher just what the hell that means, the murdercycle suddenly attacks by jumping a 2 foot ramp and driving around while the marines fire wildly. After driving in circles for a while the murdercycle finally shoots one of the marines with a laser before driving off, presumably to save the joy of the hunt for another time. Luckily the space-laser wound isn't too serious and the marine is able to get up and walk it off as the group runs for the cabin, where Kirby pounds on the door pleading to be let in before he realizes that the door opens outwards. That's what they call "military intelligence", LOL!

Later, Kirby and Wood are arguing over what to do next when Kirby demands to know what is going on. Finding a CB radio in the cabin, Kirby threatens to call in the cavalry unless he gets some answers. Wood asks why Kirby thinks he knows any more than anyone else. "Three words," Kirby replies. "C-I-A." There's that military intelligence thing again. Kirby decides to take a contingent into the nearby ghost town to see if he can dig anything up and orders one of the marines to stay with Wood, keeping him under guard so he doesn't go crazy and keep ransacking the cabin for more archaic equipment. Once in the town the team wanders around, examining some blood splattered on a wall, before Dr. Lee's spider sense starts picking something up. "I'm feeling something," she says tentatively, then 0.7 seconds later a window 8 feet behind her blows out as the murdercycle jumps through it and onto the ghost town's main street. There's a five minute action sequence as the murdercycle drives up and down the street while the marines fire at it before the murdercycle finally gets bored and drives off, screeching like Godzilla for no apparent reason.

After the threat is gone, the team continues wandering around with no particular goal in mind. "What would Mr. Fantastic do in a situation like this?" asks Dr. Lee, who even as a girl is immune from the screenwriter's unending nerd references. Eventually they stumble upon the corpse of the security guard, who conveniently died while holding an strange keycard device straight up. While they stand around wondering what the keycard is for, one of the marines happens to turn around and notices a large cellar door inset in the ground literally ten feet from where they are standing. "Maybe the murdercycle wants whatever is behind that door!" one of them says brightly, despite the fact that there's no reason that they would actually be referring to the thing as a "murdercycle" unless they were as clever as the movie's producers, which is to say, not clever at all. But before they can determine what to do, the murdercycle shows up again, perhaps agitated that the team is getting too close to the Truth, whatever that may be. 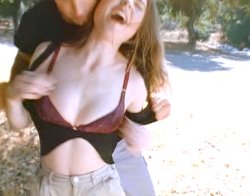 There's nothing hotter than CIA agents daydreaming about rape.This time, the murdercycle is clearly pissed off, because instead of driving back and forth before eventually losing interest and leaving, it heads straight for one of the marines, who helpfully stands in the middle of the road firing wildly until the murdercycle sends him flying through the air. Amazingly, despite being run over by a alien death machine, the marine manages to hop back up to his feet just in time to blown away by some sort of special photon torpedo the murdercycle keeps behind its headlight. Thus sated, the murdercycle drives off again. The marine, mortally wounded, coughs and sputters in the dirt, measuring his last words. "Mr... Fan... fan... tastic," the sad, dorky marine manages to say as his final words in this life, before Kirby pulls his gun and kills him, because if there's one thing marines do, it's shoot their own wounded soldiers to put them out of their misery.

After putting the marine in a body bag they were conveniently carrying with them, Kirby turns to confront Wood, who finally caught up with them. "So what do you got hidden away in this little park up here!?" Kirby shouts. "Toxic waste dump? Illegal arms reserve? How about a spy satellite?" I don't understand why the CIA would want to hide a spy satellite underground in the middle of Colorado, but then I am willing to admit that maybe there are surveillance strategies I just don't know about. Wood refuses to answer, and when Dr. Lee tries to read his mind, she's assaulted with mental images of Wood raping and killing her, which is apparently part of standard CIA training. I wonder if they have an actual course for that at Quantico or if it's more of a self-study thing.

After recovering from her mental assault, Dr. Lee senses another human being nearby, and the team storms an old barn, finding a dork cowering inside. After being dragged out, the civilian identifies himself as "freedom fighter Ditko." He soon identifies himself as a conspiracy theory nerd, referring to the area as a "hotbed of alien activity" and talking about the "secret base" the government set up after an alien invasion in the area that apparently went unnoticed by the world at large. Kirby's eyes light up and he heads back to the random door in the ground. Once there he interrogates Wood for the passcode to the door, leading to the most stupid melodramatic scene in the movie as the two battle over who can imbue their lines with the most ridiculously fake emotion. "You think you can break me?!" Wood screams as Kirby holds a knife to his throat. "It'll take a lot out of me, but it'll take a lot more out of you!" Wood's flaring nostrils are matched only by the power of Kirby's bulging eyes as he attempts to approximate rage and disdain through the techniques taught in his YMCA acting course. Luckily, they are interrupted when Dr. Lee manages to break into Wood's distracted mind and find the passcode to the big cellar door, ending the standoff before the school of acting was sullied forever.