Wizards of the Demon Sword

Monday, Nov 13, 2006 by Dan "Rivetz" Watson
Overview: Danger, romance, and fantasy adventure abjectly fail to abound as Matt Dillon's lost twin and Princess Proboscis roam the hills west of Corpus Christi, Texas in a half-hearted attempt to stop something maybe bad from happening at some point.

Directed By: Fred Olen Ray, no relation to Edward James Olmos, unless you count the craters in the plot.

The Case For: Actually, there's a pretty nice pair of tits about twenty minutes in, but you're dreaming if you think I hate my DVD player so much that I'm going to jam this colorful coaster in it again just to verify that.

The Case Against: Don't do it! Think of your family! You have so much to live for

I kind of miss the more innocent days, back before I was reviewing bad movies for Something Awful. See, back then I was naïve enough to think that bad movies were bad movies. I've since learned it's not nearly so simple. I think I've narrowed things down to three main categories of bad movies: 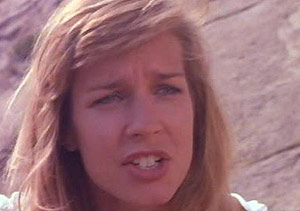 No beavers were harmed in the making of this film.

I thought I had it all figured out, and then I had to go and see Wizards of the Demon Sword. Where do you put a film like this which for some stupid fucking reason tries to jam its fat ass into each of the categories above, and by spectacularly failing at this task creates a whole new category of Bad Movie all by itself? Goddamnit do not see this movie. But geez, I'm getting way ahead of myself! Come along with me on a journey through the fantasy realm of the Demon Sword. I would politely ask that you read this slowly and take approximately 90 minutes to read this review start to finish; I would sleep better at night knowing that I caused at least one person out there to waste as much fucking time reading about this piece of shit as I was forced to waste watching it.

Wizards of the Demon Sword was directed by James Olen Ray, who I'm sure wrestled with equally enticing titles such as Demons of the Sword Wizard and WizardSword of DemonTown before basing his choice on the drunken roll of an d8. We kick off the action in Eastern Texas, I guess, with our heroine Melina fleeing three pudgy guys on horses. Speaking of horses, Melina easily ranks as the most equine princess to grace the screen since that Martina Navratilova autobio pic, or did I dream that? Anyway, she's exhausted from galloping all the way from Tucson without a single bag of oats, and the pudgy dudes are hot on her trail for reasons unknown. After three or four minutes of running around in a circle comically being chased by a dude on a horse Keystone Kops-style, she's corralled with a big net, the preferred catchin' method of fat warriors everywhere. One of the horse guys is a ninja of some kind. Just sharing. 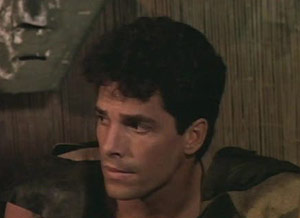 They have to do a remake of

Before these lardheads can make off with Melina, though, they're confronted by Thain of Hawksridge, who evidently took time off from his gig as Surfer #2 on Riptide to star in Wizards of the Demon Sword. There's some incredibly lackluster swordplay as Thain successfully slices through the kidnappers with a Longsword of Cardboard Wobbling +3, +4 against Fatties, with liberal use of the devilishly clever side-view-slide-the sword-between-the-arm-and-the-tummy camera angle. This is all done to the soundtrack of the most repetitive music in the history of sound. Remember when you were playing [insert shitty early 90s console RPG] because you were too lazy or stoned to get off your ass and switch cartridges and you just wanted to get the hell back to the nearest inn so you could save your game and do something productive, and it was the same two chords over and over and over and over and over and over and over again? This is that music, except there's no game, no town, and nothing productive anywhere in sight for about 83 more minutes. 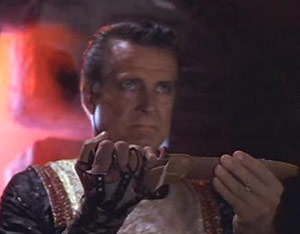 NOT CINEMATICALLY VIABLEThe "plot" focuses on the Blade of Aktar, and we keep cutting back and forth between our saucy heroes and the villains at the castle of Khoura, which based on the set can also be known as Castle The Basement Of The Director's Uncle's House. Khoura is played by Michael Douglas, I think, working out some childhood issues under a different name.

I'm going to do you the biggest favor of your day and not divulge the labyrinthine intricacies of the plot surrounding the Blade of Aktar. Michael Douglas slashes his own wrist in an attempt to release the Blade's evil powers. Hell, it may have been an attempt to release himself from his contractual obligation to appear in Wizards of the Demon Sword, but that's pure conjecture. He decides he needs a virgin's blood to complete the ritual, so he sends his butch lieutenant to a nearby slave market, overseen by Laurence Tierney (Reservoir Dogs). 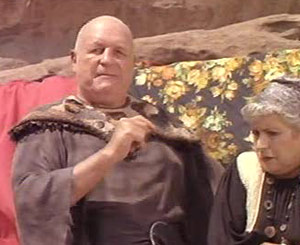 How to further ruin a shitty movie: 1) Put Lawrence Those hoping that Tierney will assign Thain of Hawksridge the name "Mr. Pink" will be sorely disappointed, but Tierney's scenes dominate the movie with his wry and canny portrayal of an actor who truly and utterly doesn't give a shit about wizards, demons, or swords. I can't even tell you how much more bearable this flick would have been if they had cast Tierney as Thain of Hawksridge.

Melina and Thain scour the land for, oh man&get this&the Seer of Roebuck. More like Wizards of the Underappreciated Comedic Genius, am I right. They go to town and swing by a brothel run by Annette Bening, who smokes a hookah and gazes offstage for her cab. Since they enter the brothel, learn nothing about the whereabouts of the Seer, and leave two minutes later, you might wonder what in the hell purpose the scene serves. Then they go see Tierney who tells them to go north. That's all of Laurence Tierney we get in the film. I can only assume that he lost some sort of drunken bet with the director or something. Since his next film was Reservoir Dogs, maybe the bet was with Tarantino to see how badly he could torpedo his career before redeeming himself in a decent role.