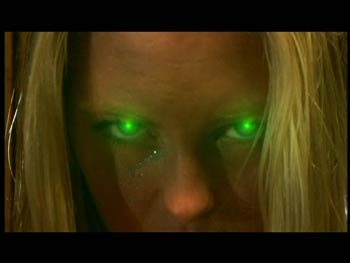 Don't look now but I am showing you the coolest part in this entire filmThe next hour of the film is a bewildering juggling act of chase scenes and typically idiotic decisions by our gang of misfit kids to separate at the worst possible times. The alien's powers are so poorly defined that it's impossible to tell who's possessed and who isn't for much of the film, nor is it possible to understand what the hell the creature's doing and why. The predator (and I hesitate to refer to it by that name, lest some poor reader actually infer that I'm comparing any aspect of this film to the infinitely more appealing Predator) is strong enough to blow through these jackasses like John Candy mowing down a domino lineup of Double-Stufs. In one scene, a few of our heroes attempt to escape by truck, only to be easily pursued by the alien at a speed of 70-80 miles per hour (we know this thanks to some helpful close-ups of the speedometer). Furthermore, anyone the alien possesses appears to inherit the alien's superhuman strength as well. There are scenes where alien "hosts" sustain direct point-blank blasts from a double-barrelled shotgun, yet shrug off their wounds without incident. So they're basically invulnerable, they can possess anyone at any time, they possess cheetah-like speed, and yet we still drag through a foot race away from the lighthouse&back to the lighthouse&out into the woods&back to the truck. The alien kidnaps Roy's wife Debbie and carries her into the forest&and then she escapes unscathed and without explanation. Perhaps Heather's crude telepathy is addling the alien's wits, or possibly the director's as well.

Watching Predator Island, I again found myself scratching my head at the underlying concept of the B-movie. I accept that budgets are low and production values are consequently not exactly at the Bruckheimer level, but fuck me, at what point did anyone sinking money into this project determine that this made anything remotely resembling common sense? A dumb-looking alien, a plot with Walmart-sized-meteor holes in it, a cast of disposable shitheads that wage constant battle throughout the movie to determine who the audience will applaud loudest at being eviscerated by the Swamp Thing&at no point does anything in this movie elicit anything other than a notched eyebrow at a particularly inept scrap of dialogue or poorly-orchestrated fight scene. My favorite line, by the way:

Roy: All right, I've got this shotgun, and also (produces a crossbow)&does anyone here know how to fire a crossbow?

Heather and Eric (in unison): I do!

What a stroke of luck, not one but two veterans of the crossbow! Forgetting for the moment why the hell a lighthouse keeper would have a shiny new crossbow kicking around. Now I feel like such a douchebag for farting around during gym class, I must have been sick on Crossbow Day. After all, I guess firing a crossbow is like riding a bike, really.

I could detail every excruciating element of Predator Island's plot but in the time it would take me I could swing by your place and scoop your brains out with a spoon and it would be much easier and more personable for everyone involved, plus you could listen to your favorite album. Instead, I thought I'd whip up a little visual aid to help describe the thrilling movement patterns of our various characters. You can see that there's a lot going on! It may seem chaotic at first glance, but I'm confident that repeated viewings of this film will reveal a stealthy ulterior motive to actually induce semi-comatose reactions in the audience. Despite my suspicions, I could find no trace of the Church of Scientology's influence on the making of Predator Island, yet the supporting evidence strongly suggests a connection. 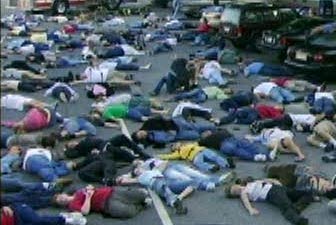 The twist ending: the alien is lured to the lighthouse, which has been slyly rigged with a couple sticks of dynamite and explodes in an unintentionally hilarious pyrotechnics show that looks a shade like a cardboard tube painted like a lighthouse with a couple of fireworks cleverly stashed behind it. Chris and Heather make it to the mainland successfully, only to find the streets littered with bodies. Well, by littered, I mean, ankle-thick. I guess you should have stayed on the island, campers! This paves the way for Predator Island 2: The Mainland, in which Chris and Heather wage deadly crossbow war on an army of aliens who are not harmed in any way by crossbow attack. This feature film clocks in at 1 minute 14 seconds and is currently slated for general release in 2009, though I have hopes the release date will be moved up, since by purchasing Predator Island on DVD I have unintentionally tripled their working budget.