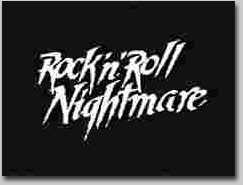 Overview: A group of geeky 1980's rock star wannabes make a movie to remind everybody just how stupid the 80's were. They rent a house in Canada and are all killed by demons and sock puppets, ensuring the movie has a happy ending.

The Case For: Hilarious "demons", the best angel vs. devil fighting scene in the history of mankind (and it sure beat "End of Days")

The Case Against: Lots of makeout scenes involving people with big hair, 1980's lingo and catchphrases everywhere, "The Tritons" (band's name) sound like an untalented version of Def Leppard if you can imagine that, movie takes place in Canada. 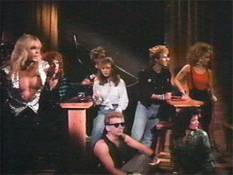 Forgot how painful the 1980's were? Maybe this will remind you.

Okay, sorry, I just had to get that out of my system. When I was standing in the checkout line at Blockbuster Video, one hand clutching the last / only copy of "Rock n' Roll Nightmare" and the other tenderly caressing my genitalia, I couldn't help but feel the need to start rockin' out! The 80's, in case anybody out there doesn't remember, was a period of history where we should've stuck to engaging in cold war arms buildups instead of attempting to produce any public forms of entertainment. The music is embarrassing. The films are laughable. Take these two awful things, combine them into one, and now you've got... "Rock n' Roll Nightmare"! Rock on!

The film immediately starts off in high gear, as we get to see an old woman making breakfast. Hell yeah, rock and roll! Rock on! She calls her stupid kid and husband (who's shaving despite the fact that he has absolutely no facial hair) to come down and eat. However, before they have a chance to get down the stairs, she's pulled into either a closet or the refrigerator by something evil. The husband gets to the kitchen, can't find his wife, then starts screaming like a fool. He quickly remembers that he never looked in the oven for her, so he opens it up and is shocked to see... some kind of bloody skeleton thingy with eyeballs! It may have been either his wife or something she was cooking, the film never bothers to explain. 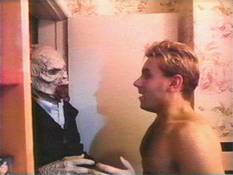 "Hello zombie, I'm an idiot! Pleased to meet you!"

Things go from bad to worse as once that scene ends, the movie cuts to a few hours of footage from a van driving down the road. There's some glam-hair-rock music in the background which you should get used to because the rest of the movie is just packed with it. The van eventually pulls into the farmhouse we saw in the first scene and a few hip, 1980s rock star wannabes exit to dish out the backstory / plot. I will present the information to you in the following easy-to-read form:

WHO: They're the "famous" rock band Triton, accompanied with their girlfriends who range from "1980's slut" to "woman with the face of Mac Tonight".
WHAT: Rock n' Roll, of course! Yeaaaaaaaaaaaaaaaaaaaah!
WHEN: Around 1985, the apex of humiliation for the human race.
WHERE: Toronto, Canada. Why are these hard core rock and rollers recording their smash hits inside a barn in Canada? Well, according to John Triton (and I am not making this quote up), "Toronto is where it's happening, man. The music, the entertainment, the arts..." This destroys and credibility I could ever conceivably put into this film, as I'm fairly sure the only thing Canada has to offer the rest of the world is plenty of land that can potentially be used for genetic testing labs.
WHY: According to their lead vocalist, "We have one month to create 10 minutes of new, good material." One month is not nearly enough time for this miracle to occur.

After an intensely stupid conversation between the manager and the groundskeeper, the band moves into their newly rented deathhouse. They engage in a "jam session" where they practice their newest songs and really earn the title of "Rock n' Roll Nightmare". The manager heads to the basement to find some new sticks for the drummer because his obviously aren't working correctly. He looks in a box and then kisses a daemon disguised as an 1980's slut who proceeds to bite through his shoulder. I guess he dies because then the scene ends and the band members don't bother looking for him anymore. I honestly can't blame them.

The rest of the band, obviously tired from rocking out all night, decides to go to sleep. They all have sex with their female counterparts in some of the most clumsy, unappealing, vile scenes ever. It's kind of odd; before I saw this film, women actually turned me on. The drummer, who's accent has changed from Australian to some kind of slummy British mutation, pumps his girlfriend with his drumming stick and then goes to the bathroom to look at himself in the mirror and make idiot remarks. A demon comes in and kills him. No big loss.