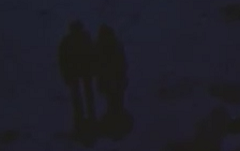 And thus, the stage is set for a really great killing spree, or at least a mildly entertaining quasi-surgical arm-removing spree, which incidentally results in death-kills more often than not because of the blood loss and lack of medical training involved...you know, maybe we'll just stick with "killing spree" after all. On hearing the news that Ted's been released from the cuckoo clink, the other five cooky cannibals quickly set up an impromptu arm-severing alumni reunion in one of their hideous psychedelic 70s living rooms, where they all get together to talk really loudly about the crime against nature they committed just to make sure they all remember that no one can ever know about it. They also probably talk about how it was a bad idea to keep crank calling Ted every day for the past 5 years and saying stuff like "can you give us a hand over here?" and "dude I helped cut off your arm and ate a piece of it" then laughing and hanging up the phone.

In a bold departure from your average dime slasher or modern "spooky CGI corpse-painted toddler jumps out at you" horror, the killer of The Severed Arm prefers to take his time and really let his victims know well in advance that he's on the way. From calling the other characters to remind them of their impending murder appointments, to breaking into their houses and leaving courtesy notes/threats without hurting them, he's possibly the most considerate killer in cinema history. The culmination of this new "telegraph horror" genre comes when a sweaty, nervous victim-to-be rides an elevator up to the third floor, only to find that someone has pressed all of the elevator buttons...from the outside! His response to this horrific omen is of course to just stand in the elevator twiddling his thumbs, until he meets his untimely demise on the top floor. This has to be the most existential horror movie we've ever seen.

We won't go through all of the characters in detail, mostly because the cinematography makes The Seventh Seal look like a lighthearted musical and we couldn't tell most of them apart anyway, but easily taking the gold star out of this bunch of casket-stuffers is our buddy Herman, who hosts a radio show which is 90% dead air and elevator music, and 10% creepy mumbling and stuttering. If Ron Jeremy and Woody Allen had a baby, Herman would be that guy's ugly cousin whose head got horribly squished by the forceps coming out of the womb. He is the anti-Frasier Crane - his radio banter is so awful and useless that it makes everyone (especially the viewers) want to kill themselves.

Unluckily for Herman, the station's recent choice to switch formats to Depressing Neurotic Loner Insomniac Revenge Fantasy Talk Radio and change their slogan to "All Death Threats, All the Time" has some unfortunate consequences. Luckily for all of us, Herman lacks the higher brain function to recognize the expediency of running like hell when the serial killer calls in to your radio show repeatedly to say "I'm going to kill you now" and request songs like "I'mma Stab U 2 Death" by Chris Brown and Linkin Park's wildly controversial chart-topper "I'm About to Break (Through This Glass and Murder You)".

Just like that, the killer slowly, methodically dismembers his way through the rest of the cast like he's thoughtfully filling out the latest crossword puzzle from Revenge Magazine on a quiet Sunday morning.

And then, to top it all off, there's the big shocking twist reveal that nobody ever saw coming: