So we meet the two main characters who will obviously be the only ones to survive the film. Mike (the guy) and Clark (the girl) are college students who live in an abandoned hospital with a bunch of obnoxious idiots. Each of the annoying characters has a definable "personality trait" which is summed up when they are first introduced to the camera. "David" is a short Asian kid who is extremely intelligent and arrogant. This is because all Asian boys are extremely intelligent and arrogant! Hooray for reinforcing racial stereotypes! "Mike" is some buff guy who repeatedly claims he's "not gay". I guess this was supposed to be a running gag throughout the film, but since it wasn't even remotely funny, it just ended up being "running", as in "yellow liquid running down my leg". "Tanya" is a communist feminist weirdo, kind of like the similarly named character from the "Command and Conquer: Red Alert" series (only the one in the movie never blew up a bridge). There's another girl named "Elian", and her personality is defined as "the quiet girl". I wished all the characters were like her. 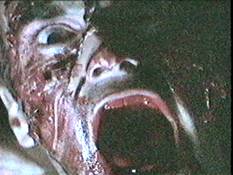 Everybody goes to sleep in the quaint little abandoned hospital of death, which means the monster is obligated to teleport in that night and make an appearance. He walks around a bit and shortly disappears. Clark goes into the basement the next day, which is apparently a storage area for the world's largest concentration of dry ice, or the director's dog was on fire while they shot. Either way, the entire scene was shrouded by an assload of fog and blue lights, which is a movie effect known as "doing something really stupid." Clark meets a guy named "Robert" who's been living in the basement for the past 523,000 years or so. After that point, the movie is about six hours of straight dialogue, so I left and went to buy a new coffee table. I will take pictures of it later, because it's scarier than anything you'll see in this movie.

Anyway, Clark hears rumors about "The Shrieker", which killed a million zillion people in the hospital a few years ago. By using SA MoFOS, Clark is able to take a whole bunch of meaningless symbols and form them into one big ball of meaningless symbols. The best part about the "pointless symbol parade" is the fact that her version of SA MoFOS makes the sound effects from the Atari 2600 version of "Pac Man". I'm not kidding. Ah, the miracles of fraudulent technology!

Senor Shrieker appears the following night and kills the not-gay guy. Up until this point, Shrieker hasn't shrieked at all, just moaned alot, as if he had severe intestinal problems. But that night things change, and he starts making the noise spiders make in Everquest when they're hurt. This goes to prove one thing everybody already knew: Everquest's sound engineers are a bunch of lazy bastards. Oh yeah, the monster also teleports all over the place and runs around like a little fool.

Clark finds a few voodoo symbols in the basement, and everybody starts arguing for some reason. She uses SA MoFOS to help piece the puzzle together, and she claims that it's using "multidimensional topography". Judging by this film, "multidimensional topography" is "the study of how to press up to 16 keyboard keys at once while random crap floats around the computer screen." I don't believe you can major in that at Harvard. Robert, the basement dwelling prettyboy, comes in and tries to start a coherent conversation.

Robert: "There are higher dimensions and things live in them. There are weak places in between these dimensions, and monsters travel through them. Sometimes they break into our dimension."