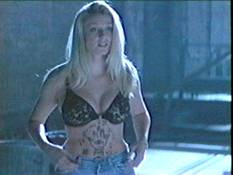 The only good part of the movie.

At first, that witty exchange made absolutely no sense to me. But then, after falling down a flight of stairs and cracking my head against a slab of concrete, I suddenly understood what he was saying! I also realized I'm covered with invisible snakes that speak Portuguese and can time travel, and caramel is our mortal enemy!

After Clark and Robert do some more research (they stand around a bunch of open books while music plays), they find out that the Shrieker only kills people who have received some kind of magic evil death card of doom. If you get the cursed card (which everybody in the movie did), the only way you can keep from being murdered is to give the card to somebody else. It's the ultimate chain letter!

The monster kills off everybody but the cellar dweller and the two main characters (who anybody with 1/10th of a brain cell knew would survive), and Mr. Cellar reveals that he called up the Shrieker to do his bidding. I'm still not sure why, perhaps he wanted the abandoned hospital all to himself or maybe he liked having pets that moan and whine a lot (I could sell him The Hair Giant for $10 if that's the case). They shoot evil Mr. Cellar and manage to defeat the monster by putting a playing card on top of it (yup, just like how the evil was defeated from "Dark Carnival"). I think playing cards are some source of unspeakable power, and we should look into keeping them out of the hands of the Russians or the Iraqis or the Japanese or whoever the hell the US doesn't like these days. The film wraps up with an incredible verbal exchange, which sufficiently sums up the whole movie: