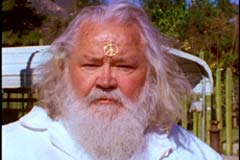 I'd make a "peace of mind" joke, but Granny beat me to it.While Tina kills Brain, who, for a member of a homicidal family of mutants, was actually far easier to kill than a normal person, the Ancient Ones show up in full force outside the house, looking for some vengeance. Well, vengeance and a nice pair of slacks. Granny goes out to meet them, well aware that they're looking for a fight. She sticks little metal peace signs on three of their foreheads, and they just stand around and let her do it, because this is evidently a normal interaction between old people. Surprise, surprise, they turn out to be explosives. So, that's three Ancient Ones down, courtesy of Granny's exploding peace signs. Oh, and also, one guy dies when his heart explodes from the shock of seeing exploding peace signs. I really wish I was kidding about this.

Now it's Plates' turn to go on the offensive, and this time he actually kills someone with a plate! You can't imagine what a happy day this is for him! I mean, you go through life calling yourself Plates, constantly throwing plates at stuff, and everyone just says you're crazy. Then, one day you kill an old guy with a plate to the face, and who's crazy then, huh? 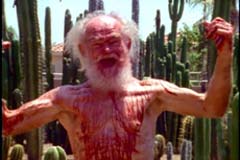 This picture should be in the dictionary next to the word "coot."The Ancient Ones are now down to two members - an old woman and Shakes, the guy with Parkinson's. Shakes takes off his shirt, which marks yet another image I'll never be able to scrub off my retinas, and chases after Plates for a one-on-one battle to the death. This is it, Plates versus Shakes, crazy plate-throwing albino midget versus old man with Parkinson's. You can't ask for a better fight than that. Plates starts things off by hurling a plate into the air. As Shakes watches its graceful arc, Plates chucks another plate square into his groin. This is really shaping up to be a banner day for Plates! He goes into a victory dance that would make Michael Jackson jealous, but lost in his reverie, Plates doesn't notice Shakes getting back on his feet. The old man knocks Plates to the ground with the very plate that crushed his nards moments ago, then proceeds to literally rip his head off and punt it. Shakes returns to his woman, bruised and bloody, and the two of them kiss and walk off into the sunset, forgetting that they had come to take revenge on Surgeon General, or that they arrived on motorcycles. Score one for Alzheimer's. 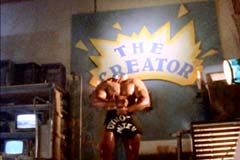 You just know he stole that banner from a middle school production of "Godspell," too.Meanwhile, Tina stumbles upon some sort of laboratory in the bowels of the house. Ugly, misshapen things grow in glass cases, and fish flop around on the floor for some reason, presumably for science. Then, at last, the Creator reveals himself in all his glory. As it turns out, the Creator is a headless bodybuilder in spandex shorts that say "DYNO-MITE!!" on the crotch. Suddenly, the question of why someone would intentionally create a plate-throwing dwarf becomes a lot clearer. The Creator prattles on in a disembodied voice about how mankind creates only to destroy, or some similar nonsense, but Tina basically tunes him out. Her eyes are on Granny, who has snuck into the room and hooked herself up to a tube connected to a dead body. Tina breaks the tube, and Granny instantly dies a horrific death, full of melting skin and green muck.

Honestly, this just raises a bunch of questions. What the hell was in that tube that would possibly cause Granny to die if it was disconnected? Presumably, it must have been something life-sustaining, but even so, how down to the wire must Granny have been cutting it if her separation from the tube killed her that quickly? Was it immortality juice? It sure as hell wasn't eternal youth, that's for sure. Is this the Creator's doing? Do all the members of his little family need to hook themselves up to tubes on a regular basis? Did Granny really need to do that right this second, while her family members are being picked off one by one? Am I really spending this much time trying to figure out the logic behind a movie whose ultimate bad guy has "DYNO-MITE!!" sewn over his junk?

After Granny expires, the Creator's chest opens up, revealing a face within. I swear I've seen something like that before, I just wish I could Totally Recall it. Now that's comedy! Anyway, the head turns out to be attached to a demonic baby, who flies at Tina. Naturally, she subdues it almost instantly, because it's a baby. The moment the baby goes down, the Creator starts twitching and collapses. For a guy who has genetically engineered a whole family of homicidal freaks, you'd think the Creator would be smart enough to come up with a personal defense system that doesn't involve firing babies at people, particularly babies who are directly linked to his own personal well-being. Just seems silly, when you think about it. 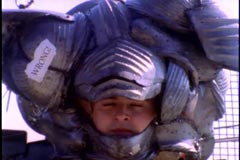 Explaining this image would only ruin it.Tina isn't out of the woods yet. Surgeon General leaps into the fray, and quickly overpowers her. For once, he finally decides to use his enormous metal jaws to kill someone! Unfortunately, just as he's about to bite Tina's head off, the demon baby attacks Tina again, causing Surgeon General to accidentally chomp off the top of its head instead. Surgeon General is distracted enough by his error for Tina to shove him into some conveniently placed electrical equipment and fry him. See, now that whole demon baby thing really has to be seeming like a bad idea.

As it turns out, the "DYNO-MITE!!" sign over the Creator's crotch isn't just a bold declaration of prowess, it's also an advertisement. Tina opens up his shorts and finds two bombs in there. It's a good thing, too, or otherwise she'd just be poking around a dead headless guy's winkydoo for no good reason. She sticks one of the bombs on Surgeon General's body, just to make sure, then gets the hell out of there. The bomb goes off, but Surgeon General just keeps on coming. He finds Tina outside, but doesn't have enough strength to do much about it. Tina has a vision of her dead family members urging her to show restraint and forgiveness, but she decides to screw them and run Surgeon General down with one of the Ancient Ones' motorcycle.

As Tina rides off, the other bomb detonates, taking the entire house with it. She makes her way to the local Sheriff's office, where she tries to get her story out through her hysteria. That's when she notices pictures of her dead family scattered around the office and realizes that the cops are in on it, too, for some reason. She lets out a blood-curdling scream, and keeps on screaming as the screen goes black. Then she keeps screaming as the credits begin to roll. In fact, she screams all the way through the damn credits. No music, just five minutes of shrill screaming. It's just Gabe Bartalos' way of saying, "You think you can sit through my whole movie, huh? Well, I'll show you!"

In my long and illustrious career reviewing movies for this site, I have watched plenty of films that took the overwhelmingly adequate Texas Chainsaw Massacre premise and just ruined it. None of them, however, have had Warwick Davis, and before Skinned Deep, I would have told you that that put them at a severe disadvantage. I don't know if it was the wholly inconsistent job they did on the makeup for Mr. Davis himself, the excruciating scene of large-brained nudity, or the headless, baby-launching bodybuilder, but somewhere along the line, this movie lost its way. It started out as just another example of a man who has no business writing or directing taking a time-honored setup and running it into the ground, but the constant stream of incomprehensible subplots turned this into another animal altogether.

The DVD case for Skinned Deep says that the movie is "twisted, gory, and often hilarious." Now, I'll concede the first two points, but I have a bone to pick with the last one. I'm not saying that this movie isn't hilarious. A midget covered in baby powder hits a shaky old man in the nuts with a dinner plate. You're damn right it's hilarious. But there is a message I want to get out there to all the would-be filmmakers who think that they can make a godawful piece of garbage and then get off the hook by saying they know their movie is funny. It's not enough to just say you know the movie is funny. You don't get to make crap and then expect praise because you're supposedly in on the joke. Your movie has to be genuinely, consistently funny for that to work. If you make a crappy movie, then try to play it off as a big joke, you've still just made a crappy movie, but now you look like an asshole, too. Gabe Bartalos, I am talking to you. You've been reprimanded. Now don't do it again.