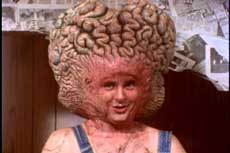 "Just once, I wish a girl would look past my giant brain and just love me for my highly average body!"When Tina wakes up, she finds herself in a room completely covered in newspaper. The walls, the floor, the furniture, it's all covered with newspaper. It's fresh newspaper, though, so Tina can go potty and chew it to keep her incisors from getting too sharp. That's good hospitality, that's what that is. Tina picks a random patch and tears through, but finds that there is a barred window on the other side and just gives up. Now, I've never been in that situation myself, so I can't say for certain, but I'd like to think that if that ever happened to me, I'd at least look all the way around the room before deciding that escape is entirely impossible. You know, maybe at least try jiggling the doorknob sticking out of the far wall? Maybe? Just a little? Tina, are you getting what I'm trying to say, here? Ah, forget it. 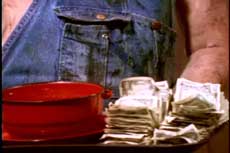 Soup and money. I really don't know what else to say.Anyway, Brain lets himself in through the door - door, god dammit, Tina - and asks if she's awake. Allow me to reframe the situation. The man with the three-foot tall brain just asked the girl who is currently standing up and looking at him if she is awake. Not the brightest monkey in the zoo, that Brain. He offers her a refreshing meal of soup and money (really), but she declines like a pissy little ingrate, whining about how her family's dead and she has her period or something. Like a good huge-headed boyfriend, Brain gives her some space. Once he leaves, Tina quickly finds an unlocked hatch in the floor and escapes. I'm sorry, but this is just the most ridiculously easily escapable cell ever. I mean, the secret exit route is not only well-lit, it's even decorated with twinkle lights for a nice, welcoming feel. Of course, then Tina has to go and ruin in when she finds her dad's severed head and reacts by puking all over the camera. Way to be a good guest, Tina. Jeez. 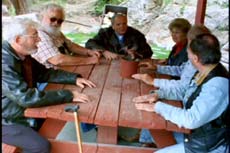 Bad. Ass.Meanwhile, Granny's roadside diner has some new customers in the form of a rowdy biker gang appropriately called The Ancient Ones. It is a biker gang completely make up of old people. One of them is called Shakes because he suffers from Parkinson's! You can't just make up comedy like that, folks! After some highly uncomfortable flirting between Granny and the gang's leader, whom I will call Peter Jennings, the rest of the gang hits the road. Tina runs out of the house and begs Peter Jennings to save her, but of course, he thinks she's crazy and stalls long enough for Granny to summon Surgeon General to kill him.

This whole scene proves a sad fact about this movie. I'm not sure if it's senility setting in or a deep sense of personal shame, but all of the elderly actors in this film get steadily worse as time goes on. This is especially true for Granny, whose acting at the beginning of the movie is actually acceptable, but who by this point is talking like she's trying to explain to her three year old grandson why he shouldn't play with his own poop. 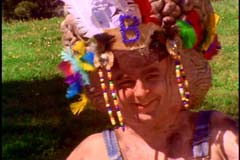 You know, you'd think he'd want to do something to call attention away from the brain... area.The movie takes a romantic turn as Brain takes Tina out for a ride on his motorcycle. He even gets all dressed up for their date, donning a strange headdress that, on a scale from one to gay, is just really flat-out super-gay. They actually have a nice chat, as Tina tries to convince Brain (or Brian, as he prefers to be called) to leave his family, and he explains that he would if he could but he can't so he won't. He has to stay, because it is the will of the Creator. This is the first we've heard of this mysterious Creator, who evidently designed Brain, Plates, and Surgeon General, if not Granny, as well. Still, Brain dreams of living a normal life. We are even treated to a brief fantasy sequence where Brain imagines the freedom of the outside world. Sadly, this fantasy takes the form of Brain running buck naked down a city street. I'm serious about this, now. Gabe Bartalos does not hold back. If you've never seen a pudgy white guy with a giant brain running around in the nude, his man-bits flapping around like a wounded goose, you should do everything in your power to keep it that way.

That night, two members of the Ancient Ones sneak back to the diner and find Peter Jennings' bloody gang jacket. This can only mean one thing - revenge, right after the early bird special at Bugaboo Creek. 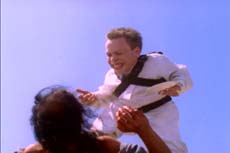 Look, you're still not getting this. The guy loves plates, you hear me?The next day is an auspicious occasion - Brain and Tina's wedding day! Brain's in his formal overalls, looking dapper as ever. Surgeon General and Plates stuff Tina into a white dress, then tie her to the hood of their car, as is their custom. They head out on the highway and play chicken with a pickup truck full of rednecks. The rednecks swerve at the last moment, but they pay a price for their cowardice - Plates chucks some plates at them as they pass! Take that, losers!

Not willing to let Plates have all the fun, Surgeon General jumps onto the pickup truck and kills all but one of the hicks contained therein. Plates gives the last survivor a lengthy lecture about the philosophy and science behind a good plate, then forces Tina to pour dirt in the guy's mouth until he dies, which actually happens fairly instantaneously. Congratulations, Tina is now part of the family! I'm not positive, but I think this must have been a Jewish wedding. 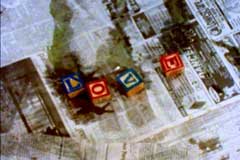 Okay, this is getting silly.Back in the newspaper room, Brain apologizes for Tina for the whole making her murder someone thing, but she's surprisingly okay with it. So okay, in fact, that she murders Brain, too! She just reaches up and pulls a chunk of his brain off. As it turns out, his gigantic brain is actually hollow and filled with green goo and letter blocks, like you'd give to a small child. Four of the blocks fall out of his head and spell the word "LOVE," but Tina stomps on them and they turn into "HATE," surrounded by more green goo. Now, I'm no doctor, but I'm fairly certain that neither brains nor blocks work that way.