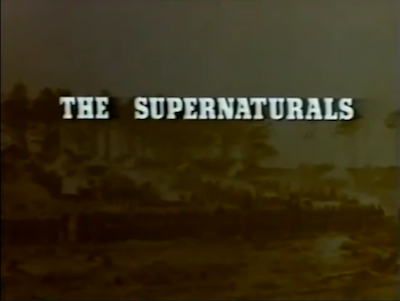 Overview: The Supernaturals is a really vague name for a movie, which is great, because it consists entirely of a squad of army recruits being terrorized by a vague array of Confederate zombies, ghosts, hallucinations, and a fog machine inhabited by Robert E. Lee's soul (we assume, since everyone seems really afraid of the fog.)

The Case For: Stars both Nichelle Nichols and LeVar Burton in a Star Trek pre-post-reunion, so if your hobby is going to Star Trek reunions and pissing off the former cast members, bringing up this movie will probably do the trick.

The Case Against: All the soldiers/victims love practical jokes and yelling incoherently about "earthquake weather" and crossing pigs with humans, which sort of undermines the whole spooky atmosphere. Also, their idea of a practical joke includes such mystifying japes as "jumping out of a truck" and "pulling a knife on someone's testicles." 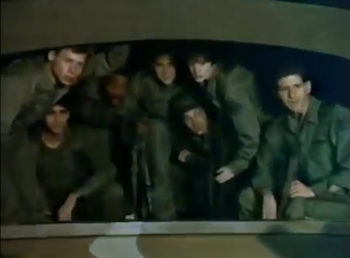 As is so often the case in our line of work, the opening sequence of The Supernaturals can only be described as a grotesque war crime. The main difference is that this time, it's not a cinematic atrocity, just the regular kind. We kick things off on a Civil War battlefield, where a Union captain is making a group of captured rebel soldiers march through a minefield that they laid. He tries to justify this by whining about how he "lost a lot of men" to that minefield, although given that the field seems to be the size of a tennis court, we feel like those deaths are sort of on him for not just going around it.

For the extra evil cherry on top, the human game of Minesweeper includes an 8-year-old boy who they found wandering around in a Confederate uniform[1]. Don't worry though, little Johnny Reb is also a necromancer for some reason, and he raises a zombie army to get his revenge...eventually, like in 100 years or so. The movie never explains what happens in the meantime, but we're picturing him just sitting on a porch with a mint julep in a white suit, complaining about the heat while a zombie fans him with a palm frond.

We'll give some credit to The Supernaturals for being the closest thing to "atmospheric" we'll ever get to see in this job, although there's a pretty thin line between slow-building suspense and abject boredom which they occasionally cross. The bigger problem is that the atmosphere of dread is brutally undermined at every turn by our modern-day victims, the 82nd Comedy Warfare Division, a fresh-faced squad of trainees straight out of the Prankademy:

We didn't know "put a can of beer in a skull and shoot it" was actually a prank, but maybe we're just not on the same level as these battle-hardened veterans of prank war.

Leading the Komedy Boot Kamp Death March to Nowhere (tm) is none other than Nichelle Nichols, who we sure as fuck never expected to show up in this column, ever. Maybe she was looking to break some more ground as the first black female drill sergeant in movie history, or maybe she just found it really cathartic to get to yell at someone else about operating the radio for once. Oddly enough, one of her soldiers is fellow future Star Trek alumnus LeVar Burton, who we'd like to think he ended up on Star Trek entirely due to Nichelle complaining about how "even goddamn Star Trek was a step up the dignity ladder from doing this shit." Of course, we'd also like to think that his Reading Rainbow experience would have prepared him to read scripts before he signs on to them, and yet here we are.

Whatever you're imagining is about to unfold in this battle of modern soldiers vs. Confederate zombies, odds are you're paying way more attention to the context than anyone involved in The Supernaturals. Let's see here, we have a black sergeant vs. civil war zombies and ghosts, surely both sides will be dealing with some particularly complicated emotions regarding...nope, never mind, nobody notices any of that. Well, at least it's still a classic tale of zombie revenge for a horrible injustice[2] that...no, wait, actually all the zombies are working for the now-decrepit necromancer kid and his dead ghost mom, they don't actually give a shit about being blown up 100 years ago.

Whatever the hell is going on, all of the soldiers are scared shitless. In fact, they show way more fear than your average group of teens in a party-mansion-turned-murder-house movie, although that's more a commentary on shitty acting in those other movies. In the end, they're saved by the fact that one of their squadmates looks exactly like the ghost lady's husband, who uses his family resemblance to finally talk down the now-decrepit Grand Wizard of Dixie and make all the ghosts and zombies vanish. Either that, or he just listened to some random asshole telling him to take apart his zombie mother nightmare after 150 years and go "OK, sure, when you put it that way, zombies are bad!" We're not really sure, but both options are equally unsatisfying. All we know is that we're no longer afraid of the South Rising Again.

[1] To be fair, the kid likes to put on a military uniform and wander around active battlefields, so it's not like his life was cut tragically short. Odds are he was just going to wander through that stupid unmarked minefield on his own a week later anyway.

[2] It's also incredibly specific zombie revenge, since the movie makes a huge deal about both the original Union army squad and the modern recruits being the "44th", as if the somehow the zombie Dixiepocalypse was lying in wait until the army unit with the right number finally came along.