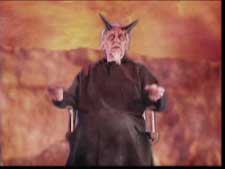 Wow, Hell just doesn't seem quite as frightening as I pictured it. Orange, yes, but not frightening.Cindy gets pulled into a portal, A.K.A. another freaking spiral. She finds herself kneeling on the ground in the fiery pits of Hell, by which I mean a room with some crappy fire graphics. An old man with reddish makeup and horns sits on a chair before her. Clearly, this is Ol' Scratch himself. Satan bitches and moans about not getting enough respect, so he explains that he created Dr. Carnage and Max Assassin to help him conquer the world of children's media. He does not, however, explain why he brought Cindy to Hell or why she hasn't been killed. In other words, he doesn't say anything even remotely useful. The "1001 Wacky Cartoon Sound FX" CD must not have any Hades-related sounds, as the best that Castro can muster is a lousy wolf howl every two seconds. Satan goes on to explain that he wanted to work with cartoons because they can do anything. To prove his point, he makes Dr. Carnage tiny and Max Assassin huge. Max chases Dr. Carnage away. Cindy is not impressed by Satan's pathetic editing tricks, though. She's got a trick of her own. God, I can't believe I'm actually about to type this... 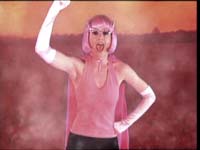 This movie owes me an apology.

She turns into a super hero. Seriously. Cindy turns into a bright pink, masked fucking super hero and challenges Satan to a fight. I couldn't make this stuff up if I tried. Satan threatens her for a while, then pussies out and vanishes in a burst of bad special effect. Super Cindy warps out of hell and emerges from the TV in her house. Finally, she turns off the damn DVD player and stops the spiral. She flies (read: her still image is dragged across the screen) to another part of the house, where she finds a DVD printing press. You think I'm kidding but I'm not. There is a printing press sitting in her house with "Terror Toons" DVD's falling out of it. That's right, Satan's entire evil operation is based out of her rec room. My guess is that Rudy Balli just couldn't figure out how the hell to end this mess. The DVD press is a formidable foe, but it's no match for Super Cindy's super switch toggling power! She toggles the machine's switches over and over again! One after another, the switches get the crap toggled out of them at the hands of the mighty pink avenger! Soon, the contraption can take no more and starts to smoke. 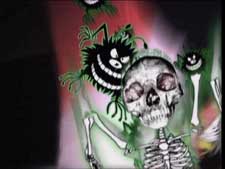 Seriously, what the hell happened here?

Max Assassin, now back to his old size, tries to stop Super Cindy, but she breaks his neck and stops on his head until his brain pops out. Every time she stomps, his skull makes a farting sound, just to be classy. Dr. Carnage gets the drop on her and tries to strangle her from behind, but he lets go before she passes out because he's a complete idiot. He comes at her with a huge cardboard axe, but she catches the blade and bonks him in the nose with the blunt side. Super Cindy uses her super thing throwing ability to hurl one of the discs into Dr. Carnage's mouth. While he's distracted, she hits him in the head with the axe. Well, it's really more of a weak, flimsy drop than an actual strike, but it doesn't matter. The doctor's skull splits wide open. I don't know how to account for what happens next. The only explanation I can think of is that the last surviving animators, staving off the icy hand of death but not the warm embrace of insanity, put everything they had left to give into making one final orgy of absolutely wretched animation. All sorts of pathetic still images bound out of the head wound - little bug things, bigger little bug things, a green skeleton, the list goes on and on. Whatever. That's a super-powered thought leaps into our heroine's pink dye-addled super-brain! The "Terror Toons" DVD that Candy got in the mail came from this very press! Only an intellect far beyond mortal comprehension could have made that connection! With memories of her dead friends going through her head, Super Cindy destroys the machine the way only a super hero could - by hitting it with a pipe until it stops working. Giddyup. 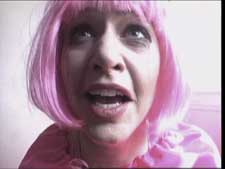 You know what this could use? A little pink.

Cindy's parents come home from the wedding arguing about who was a bigger embarrassment. The mother is filled with transvestite rage when she sees the house in shambles. The father senses that something is not right (pretty astute, maybe he's a super hero too). That's when they find Rick bashing his head against a wall, Tommy's headless body on the floor, and their older daughter, who is now a super hero, cradling their younger daughter, who is not so much a super hero as she is a corpse. Super Cindy just laughs the super-laugh of the super-batshit-insane.

Next door, a little boy runs out to his mailbox. I mean it, a real little boy! I don't know where they were hiding an honest-to-God child all this time or what they were doing to him, but finally someone whose age is appropriate to their role gets some screen time. The little boy finds a "Terror Toons" DVD in the mail and his eyes go wide with delight. Well, delight and one last spurt of bad animation. He runs back into his house, and the moment he shuts the door we hear a fiendish and familiar laugh.

There's no way to possibly capture everything that's wrong with "Terror Toons" in only one review. Rich "Lowtax" Kyanka actually thinks it's worse than "Nukie." He's wrong, of course. Nothing could possibly be worse than "Nukie." However, "Terror Toons" certainly comes pretty damn close. It just boggles my mind that this movie actually got made considering that they couldn't possibly achieve the sort of effects that the script called for with such a small budget. Applying cartoon physics to the real world is an interesting idea, but it's executed so poorly in this movie that it ends up hurting a lot more than it helps. Strip away the cartoon aspects - the awful graphics, the irritating sound effects, the insultingly bad editing - and all the movie has left is a moronic script and a bunch of actors who aren't even remotely believable in their roles. The Dr. Carnage and Max Assassin suits weren't frightening, they were laughable. I actually feel bad for the actors inside the suits. They might have actually been putting effort into trying to move like their characters, but since Joe Castro insisted on putting their every move in fast motion, they just come across as nuisances. The music is a travesty. There are three songs in the entire movie - the blatant "Beetlejuice" ripoff, the grating strip Ouija song, and the frankly confusing disco song. The music isn't nearly as bad as the sound effects, though. Dr. Carnage's goddamn laugh makes fingernails on a blackboard seem like a pleasant memory. I've had more fun listening to my dentist drilling my molars. "Terror Toons" was doomed from the start. The plot is a whole new level of lame. The villains disco and the main character turns into a pink freaking super hero and tries to beat up Satan. I have to imagine that Joe Castro woke up one morning after a month-long peyote bender, saw all the "Terror Toons" crap around his bedroom and said, "My God, what have I done?"

Oh, and before I forget, that little boy at the very end of the movie was the creature designer's son. They couldn't even get a single child without resorting to nepotism. What a shitheap.