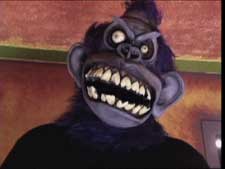 Alright, now imagine staring at this for the next hour and then tell me you don't hate this movie.Since it's been all of six minutes since the last incredibly long credit sequence, Joe Castro treats us to another! That's right, we actually have to sit through the credits of the movie within the movie whose credits we just sat through. As a testament to Rudy Balli's comic genius, every name in the credits is a misspelling of some name for Satan, such as "B. L. Zebub." Every time a new credit appears, Dr. Carnage's head pops onto the television screen and that damn high-pitched laugh plays. That sound could punch holes in steel. It sounds like someone stepped on Mariah Carey. At last, we get to the content (I use the word loosely) - Dr. Carnage turns a laboratory monkey into a gigantic purple spaz named Max Assassin. Despite being a psychotic primate with berserker strength, Max has a tommy gun. A monkey with a gun, now that's evil! According to the narration, Max goes on a rampage and Dr. Carnage is trying to catch him. That taut drama plays out as Max gnawing off a girl's leg in what could be the worst special effects sequence in the movie. Then Dr. Carnage kills the girl for no reason. There's hope, though! A cop chases after Max and the doctor, but Max replaces his nightstick with a stick of dynamite. The entire scene is underscored by an obvious ripoff of the theme from "Beetlejuice." I tell you, if this got any zanier, I'd have to drug myself up just to contain my excitement. As it is, I just have to drug myself up to contain my murderous rage toward everyone associated with this movie. 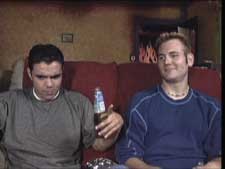 Sorry, Eddie. All the wine coolers in the world won't help you forget you're in this crappy movie.

Meanwhile, Amy convinces Cindy to call up a couple of guys - Rick and Eddie. The men are at the gym, because they're big, buff, macho types. Amy is enthralled by this because she's a dumb, vapid, ditzy stereotype. Amy asks Rick to bring some alcohol. "Well," he replies, "I know where my mom keeps the wine coolers." Stealing wine coolers from your mother is pretty damn sad for actual high school kids. Rick looks like he's about thirty. Oh well, at least he's not wearing a propeller beanie. Amy places an order at Shanghai Pizza (motto: "Look! Two stereotypes at once!"). Rick and Eddie show up a couple minutes later. They want to play strip poker, but the girls want to bust out the ol' Ouija board. The compromise is strip Ouija, where the board tells them which article of clothing they have to remove. Honestly, that's probably the best idea in the entire movie. I don't think it's exactly what the Parker Brothers had in mind when they mass produced a conduit to the netherworld, but it's still a pretty decent compromise.

Back in DVD land, Dr. Carnage and Max fade away in front of a giant spiral. Candy started playing the DVD in the afternoon. It's now pitch black outside and the damn thing is still going, as opposed to the actual "Terror Toons," which just feels like it drags on all day. With Dr. Carnage and Max gone, Candy is left just staring at a freaking spiral, and the audience gets to watch her staring at a spiral. That's quality entertainment alright. Eventually, Candy starts to fall asleep. That's when Dr. Carnage and Max Assassin appear in our world! Pray for humanity! Hell, just pray for this movie to end before Dr. Carnage laughs anymore. Not that Max is any better - he matches the doctor's laugh with equally high pitched monkey grunts. Not since Nukie and Meeko has there been a duo so painful to look at and listen to. I'd rather be breast fed by Louie Anderson than sit through any of their scenes again. 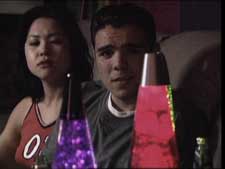 This house has way, way too many lava lamps. Just thought I'd point that out.

Remember all that praise I had for the strip Ouija idea a little while ago? I take it all back. The game montage is absolutely terrible. Apparently Rudy Balli wasn't content to sully the movie industry with his godawful script - he had to write some godawful music, too. It makes me long for the sweet inappropriateness of that lame old score that got recycled in every Polonia brothers movie. The whole montage looks like it was edited while blindfolded. We see Eddie take off his shirt, then it's back on for the rest of the shots. Rick refuses to even take his shirt off, even though the game was his idea. Instead, he shows off his ability to roll his beer belly. Way to get the girls there, Rick.

While the thirty year old teenagers are having a blast not stripping, Dr. Carnage and Max murder the crap out of Candy. Cindy stops the game when she hears the screaming and goes to investigate, much to the guys' disappointment, as it was Cindy's turn to take off her shirt. The DVD is still playing the damn spiral when Cindy arrives, but Candy is sitting up watching it. The fact that Candy's staring at a damn spiral and she's freaking covered in blood doesn't even phase Cindy. But then, if she can adjust to her supposedly little sister having massive breast implants, she's probably willing to let anything slide. When she returns to her friends, Cindy has changed her shirt for no reason. Eddie reminds her that it's her turn to strip, so she goes off camera and, uh, changes her shirt again. Let me point out once again that despite the strip Ouija game, the only character with a nude scene is supposed to be a little girl. Makes sense to me! Oh God, what's wrong with me? 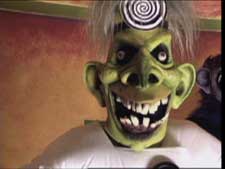 For a doctor, he sure doesn't pay proper attention to oral hygiene.

The doorbell rings, so Cindy goes to answer it, assuming it's the pizza guy. Instead, it's Tommy, Candy's little friend. Candy's little friend really needs to shave. Cindy sends him back to Candy's room. As soon as he gets there, though, Dr. Carnage rips out Candy's spine, then cuts Tommy's head off with a giant pair of scissors. Hooray for senseless violence! Hooray for inexcusably bad special effects! Hooray for screeching laughter and monkey grunts! Wait, strike that last one. The doorbell rings again, and this time it actually is the delivery guy from Shanghai Pizza.

Unfortunately, Dr. Carnage is the one who opens the door. He grabs the pizza and shoves the entire thing in his mouth. There's just one problem: the stupid foam rubber suit not only is stuck in the same expression, but there's no hole in his mouth. So basically we get to sit there and watch an ugly green retard smush a large pepperoni pizza all over his face until it all falls on the floor. Even in fast motion, it takes up way to much of my life and I now harbor a personal grudge against Joe Castro for making it. Dr. Carnage pulls out a giant pizza cutter and advances on the delivery guy. Presumably he kills him. The camera cuts away, so we'll never know for sure. Castro has no problem showing Dr. Carnage pulling a guy's skull out through his abdomen, ripping out a girl's spine, or decapitating a random Latino, but a pizza cutter attack - now that's going too far. Anyway, to recap, in about three minutes of actual screen time, two characters are introduced and killed off. Both characters serve no purpose other than to stretch the running time of this train wreck just a wee bit longer.

Cindy, Amy, Rick, and Eddie break open their second wine coolers of the evening (ooh, they're getting wasted!) They're all back in their clothes, but they decide to pick up the game where they left off - with Cindy taking off her shirt. Instead, she wonders where the pizza could be and decides to call Shanghai Pizza. Lo and behold, the phones are out. Just then, a disco ball sends spots of light all over the room... and everyone gets freaking terrified. Cindy wasn't in the least bit bothered when her sister had a pint of blood on her face, but she's petrified by a damn disco ball. You know, I really love this movie, and by "love" I mean "goddamn despise," and by "this movie" I mean... well, no, actually "this movie" works just fine. Okay, I'm going to break the paragraph here. Use the pause to psyche yourself up for the next one. This is where it starts to get a little bumpy.