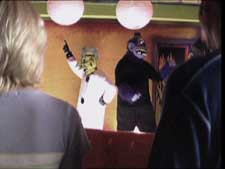 There is no excuse for this picture. None.Ready? Alright, here goes. Dr. Carnage and Max Assassin appear in the living room. They each strike a pose out of "Saturday Night Fever." Shitty music begins to play, and they start dancing. Well, "dancing" might be a strong word. It's more like spastic flailing in fast motion with music in the background. The Simpsons says that fast motion makes everything funny. Once again, "Terror Toons" has proven The Simpsons wrong. So now there is a green-skinned mad scientist and a homicidal purple gorilla in pants trying to disco while the four teens watch. Cindy, Amy, Rick and Eddie, all of whom were scared shitless by a disco ball, actually start enjoying the show. They don't question where these two freaks came from or why they're dancing, they just start to laugh. I actually can't decide which group is stupider - the killers for dancing or the teens for standing there loving it. Eddie in particular thinks its the greatest thing ever. He laughs so hard that the veins in his head pop out of his skin and he dies. Not long ago, I came to the conclusion that the death by butter from "Drive In" was the dumbest way to die I'd ever seen. I was young and misguided then. Laughing to death while watching the world's ugliest puppets dance around like epileptics is far, far worse. Oh, and once Eddie dies, Max stops dancing, pulls out his infamous tommy gun, and starts shooting. Even though he's all of five feet away from the teens, he doesn't hit anyone or anything. At all. 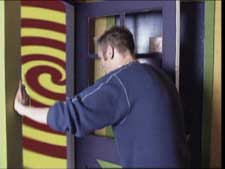 Check out the craftsmanship on that vortex! You don't see that everyday, by gosh.

When Max starts shooting, Cindy, Amy, and Rick finally get the idea that they might possibly be in danger. Cindy and Amy try to go out the back door, but when they open it, they are blocked by - you guessed it - a giant spiral. Yep, the whole house is now surrounded by the yellow and red Spinning Vortex of Death. I don't know where that vortex was when the pizza guy came, but it's there now and that's what matters. Joe Castro's entire theory of filmmaking seems to boil down to "I can do whatever I want and no one will ever notice the discrepancies. Wait, human beings don't have memories, right?" So now there's a vortex. And not just any vortex! This vortex is so swirly (read: not particularly swirly) that when Rick sees it, he is immediately entranced. Amy and Cindy manage to tear him away, but the intense dizziness caused by a whole four bands of gradually rotating color makes him vomit. Out of concern for their friend, Cindy and Amy leave him to wallow in his own gastrointestinal juices.

Cindy and Amy go to check on Candy and find her body, as well as Tommy's decapitated corpse. Just then, the cartoon cop emerges from the TV, which is still playing the damn spiral. Cindy demands to know who he is. She had no questions whatsoever for the green guy or the huge purple ape, but the normal-looking man wearing blue with a badge on his police hat that says "police officer" in big letters - that one's a mystery. The cop gives Cindy a ridiculously huge fake gun. Like all of the characters that emerge from the television, all of his movements are accompanied by insanely annoying cartoon sound effects. We hear a speedy "zip" sound as the cop leaves, despite the fact that he's not so much running as he is sauntering out of the general area. Oh well. 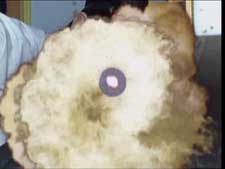 It's almost like this movie blows ass... hey wait, it does, it does!

Rick was left all alone, so of course he gets captured and taken to the totally random entirely black room with nothing but a chair in it that would never exist in real life and yet seems to be a part of every home in bad horror movies. Dr. Carnage cuts off his scalp, then the top of his skull. He runs his fingers across Rick's brain, which makes him laugh. At this point, it's not even remotely worth the effort it would take to nitpick about how there are no nerve endings in the brain, so that wouldn't actually work. No, you know what? It is worth it. There are no nerve endings in the brain, so that wouldn't actually work. We cut to Amy and Cindy, who are stalking the diabolical duo. Various animal sounds play as they walk through the house. No, I don't know why. In the meantime, the cop find the Vortex of Death, but it has no effect on him. He can't resist the allure of a box of donuts on the counter, though. See, cops like donuts! Aren't generalizations fun? The answer is no, no they are not. The cop picks out a donut and takes a bite, but - oh no! - there's a stick of dynamite in it! The resulting explosion is perhaps the saddest attempt at special effects I've ever seen. It makes me want to cry just thinking about it. The graphic is so obviously edited over the screen that I actually wondered the first time I saw it if it was really just a shitty transition. After a flash, all that is left of the cop is a smoking skeleton. The shockwave from the explosion blows Cindy and Amy away from one another with an effect so piss poor that I can't even find the words to describe it. Let's just say it sucks and leave it at that.

Good thing that vulture's there. Otherwise how would we know she's dead?

Amy tries to hide in some sort of closet or wine cellar or something. Sadly, she didn't count on the awesome detective skills of Max Assassin. She breaks a bottle over his head, but it has no effect. Then he breaks a bottle over her head, and down she goes. Some people just can't take their concussions. Max then attacks Cindy and knocks her out, as well. Things don't look too good for our heroines. It's a good thing that Max and Dr. Carnage completely ignore the glaring opportunity to kill them both. I mean, if the psychotic killers had actually killed them, it wouldn't have made a lick of sense! Instead, Cindy wakes up tied to a chair next to a lobotomized Rick. Amy is locked inside a magician's box in front of a curtain. Dr. Carnage emerges with a top hat and cane. He pulls Rick's brain out of the hat. A few minutes later, Cindy realizes what it is and finally screams. Dr. Carnage saws Amy in half, then plays with her guts. A clipart vulture wobbles onto the screen and hovers around the entrails. It's not even an actual animation, just a stupid still image. At this point, it's pretty clear that the animators are suicidal. I can't say I blame them. Believe it or not, things actually go steadily downhill from here. Observe.