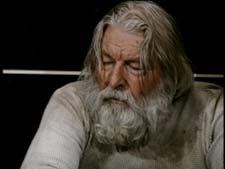 Landau and Maltby go searching for a source of meat. They find it in Caleb, the undertaker at the rundown Farewell Acres cemetery. Caleb is a filthy, crude, hairy old man who is married to a nosy, superstitious, hippo with bad hair named Cleo. Landau asks Caleb to dig up bodies and give them to him for the whopping sum of twenty dollars apiece. Caleb flatly refuses, which is the first sensible thing in this movie. Anyone who would dig through six feet of dirt, unearth a coffin, and handle a dead body for twenty dollars needs a serious lesson in money management. Of course, Caleb has no problem doing it for fifty bucks apiece instead. Cleo is dead set against Caleb having any part in this, but no one listens to her because she's a crazy bitch with too much lipstick and an irritating shirt. She warns Caleb that "God will get you," which is an interesting interpretation of the role of the divine in the universe. Personally, I don't like to think that God exists to "get" people. But then, I'm not an old white trash whore.

Felina, having cleverly disguised her appearance by putting an ugly hat over her giant freak ears, takes a look through a supermarket for food. Despite her best attempts to blend in, she stands out because of her feline behavior. In this case, by "feline behavior" I mean frequently bending at the knees for no reason. Her search for suitable sustenance is thwarted when the guy at the deli counter declines the chance to give her large quantities of free food. Her alien ways have no method for dealing with this obstacle, and she remains hungry. 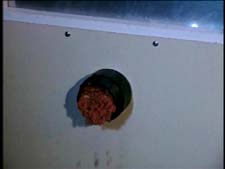 So much meat squeezing out of a tube... oh man, I have to poop.

Now that they have some bodies, Landau and Maltby get the grinder running. Rather than show the gore and blood splatter that one would associate with running a human body through a bunch of spinning blades, there are just a bunch of shots of some ground chuck being squeezed out a tube in the back of the machine. Sad to say, this is another one of the signature visuals of "The Corpse-Grinders 2." All of the potential guts and gore that would make chopping up a human body for food seem as depraved as it is are replaced by meat squeezing out of a tube. Somehow, it just doesn't have the same effect, which is to say, any effect. Not satisfied with the rate bodies are coming in from Caleb, Landau and Maltby look elsewhere. First, they meet with the mortician/gravedigger at the town's more upscale funeral home. I don't know how big this town is where the movie takes place, but they have funerary services aplenty. The mortician is an odd fellow with the most bizarre hair known to man. They ask him to give the bodies he handles to Caleb, rather than actually putting them in the ground. In addition, they ask him to use chicken, pork, beef, and fish flavored embalming fluid. Seriously. I'm... I'm not joking. Flavored embalming fluid. How do you play that one off? "Why do we want you to flavor the bodies? Certainly not so we, the owners of a fast-growing cat food company who are offering you stock in this fast-growing cat food company, can make food out of them! No sir! We just want to.... make... cat food... out of them. Damn!" But the mortician agrees to help them anyway. I can't say I'm surprised. Anyone who would intentionally allow their hair to look like that is clearly insane. Landau and Maltby then go to the funeral director of another funeral home and offer to cremate the bodies for him for a lower cost than he would have to pay otherwise. The funeral director agrees, so long as they get the ashes back on time. Once again, a movie has convinced me not to die, simply because of what might happen to my body afterwards. Great, now I'm going to have to become the Highlander. 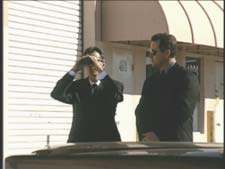 Note how they're using binoculars to keep tabs on Lotus Foods. Note how the Lotus Foods factory is six feet away from them and they're standing in the open in broad daylight.

Angie has put Kitty on an all-Lotus diet, and now the scruffy little bastard can eat all day. According to Angie, the cat even growls when you take away its food. Howard, being the brilliant doctor that he is, immediately takes away its food. After waiting a good long while for the food to be returned, the cat scratches him. Now, some of you may be saying, "But Ben, you said no cats go berserk in this movie!" Calm down, there, slugger. I wouldn't call one scratch "going berserk." The guy took away the cat's food while it was eating! Of course it's not going to be happy! If you were at a restaurant, and the waiter came and took your plate away while you were still in the middle of your dinner, wouldn't you be a little pissed? Nonetheless, Howard assumes the Lotus food must be doing something to the cat's brain, so he calls the CEO, Mr. McBride to find out the food's ingredients. McBride offers to read him the ingredients, but no, Howard won't have any of that. He insists that McBride do a full investigation into the formula. Being a total pushover, McBride actually takes the request to Professor Mikoff, who has long since forgotten about those aliens he saw. McBride asks the professor to do an analysis of the Lotus cat food. Mikoff happily agrees. Man, it's got to be nice to be a scientist with no real purpose. You can just study anything you like, happy as a clam and completely mad, and everyone gives you space and lets you work because they assume you're doing things they can't understand. If you try that crap as, say, a mailman, no one has any tolerance for it at all. 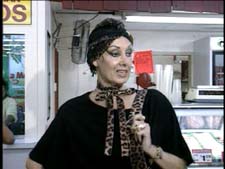 "Do you like my eyeliner? I got it at the third outpost of Seti 8... I mean, at the outlet mall! Yes, the human outlet mall..."

At the supermarket, a Lotus Foods representative gives out free samples of their cat food. Felina, who has probably been in the supermarket for the past three days, for all we know, is there once again. The Lotus representative doesn't even bat an eye when Felina opens a can (they have easy-open pop-top lids - it's a big deal in the movie because this movie sucks) and sticks a wad of the food in her mouth. That's perfectly normal behavior. She does, however, get upset when Felina helps herself to several more cans from the free sample pyramid. Yep, a woman eating cat food, that's fine. But someone taking multiple free samples? Shock and horror! On her way out of the store, a trio of hooligans try to mug Felina, but using her amazing alien powers of Having a Bag Full of Cans, she sounds wallops them and is on her way. The cat-people then send a transmission directly to ASTAPP explaining that their people are dying and they need a large amount of Lotus cat food. That's right, upon landing on Earth, the cat-people make contact with an organization no one has ever heard of. Well done, cat-people! One of the members of ASTAPP decides to investigate Lotus Foods. When he arrives at the Lotus factory, Landau is out and Maltby is missing in action, so Tim answers the door. Good ol' Tim. What an idiot. He has one job to do - don't let anyone in. So what does he do? He lets the guy in. The ASTAPP guy quickly finds his way into the grinder room and sees the bodies. Maltby knocks him out from behind with a bone, then sticks him into the machine. Despite the violence of the scene, we still only see ground meat coming out the back of the grinder. I know a lot of people like to talk about horror movies where it's scarier when you don't actually see what's happening. This isn't one of those. This just sucks. 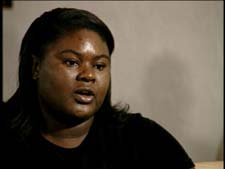 Maybe you could remember the words if you weren't so busy being HUGELY FAT.

Landau has Tim make a fire, then scoop the ashes into an urn for the funeral director. Tim doesn't suspect anything is the least bit awry. He's just so darn happy to spend time around "such pretty ashes," putting them into "such pretty bottles." I hate my life. Wait, no, I hate his life. Yeah, that's the ticket. Landau then rushes the ashes over to the funeral home where the service is already in progress. A woman plays "Amazing Grace" on the organ while a fat black woman sings the wrong words. Seriously, she screws up the words to the first verse of "Amazing Grace." I don't know if it's a crappy edit or Ted V. Mikels's half-assed direction, but all the woman sings is:

Uh... what? That last line doesn't even make sense! My brain hates that. Once the orca stops butchering a timeless classic, the funeral director starts the service. Now, I can understand him being nervous since the urn isn't there yet, but this guy acts like he's never led a service before. No one in the congregation notices the urn isn't there, they're just sad because some guy died. But the funeral director fumbles worse than the Jets when the game's on the line. Landau rushes in after the funeral director babbles on inanely for a little while, and he stops the service to run down and get the urn from him. Like it would have been that hard to play off. Jesus, if someone stuttered and mumbled that badly when they should be saying kind words about my loved one, I'd be forced to bring my loved one back to life as a zombie just so I could kill him again and take the remains to a better funeral home to get a proper service.