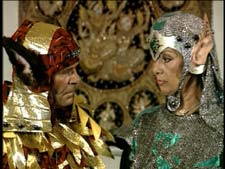 I'm not saying I wouldn't wear those ears if I believed in the project, I'm just saying that there aren't enough drugs in the world to get me to believe in this project.So all the good little cat-people congregate in some sort of official room, where their leader, Borath (say it with me, "Borath") relays the bad news that the war effort against Traxis is stinking more than a litter box after a month with no cleaning. He doesn't actually say that, mind you. That was me being witty. He does, however, say that they have no food and are essentially boned. That's when Felina, the official cat-woman in charge of the Department of Being Able to Speak and Move At the Same Time (a department which is sadly underfunded on Ceta), says that she has learned of a planet called Earth which has a similar environment to Ceta and could have usable food. Allow me to speak for everyone, everywhere, ever when I say, well no shit, earface. Your people came from Earth. Of course you know about it. Didn't you read the scrolling text a few paragraphs ago? Still, everyone treats this discovery of Earth like it is the greatest thing since Iams. Borath, Felina, and their technical officer Fat Guy embark on a mission to Earth to return with a ship full of food. Surely, one ship full of food will be enough to feed the entire planet for centuries to come. Hooray! Fat Guy is sure to note, however, that while Earth people "may not fight dinosaurs, they are very territorial." Uh... what? Are those the only options? Be territorial or fight dinosaurs? I'm confused, angry, and gassy, and we're only five minutes into the movie. 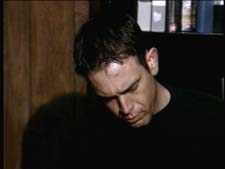 Despite the ears, Landau is a human, not a cat-person. I understand your confusion.

We turn our attention to Earth, homeworld of Frito-Lay quality snack products. There, Landau, nephew of one of the co-owners of Lotus Cat Foods from the first movie, is going through the Lotus office for some reason. Apparently, in the twenty-odd years since the place went out of business, the office has fallen into horrible disrepair. And by "horrible disrepair," I mean a chair has tipped over and a lame plastic shield has fallen off the wall. Good thing the young, go-getting Landau is able to fix all that. As he does so, he comes across a carefully hidden (read: on a shelf) folder containing his uncle's secret formula for cat food (read: chop up corpse, serve room temperature). He shares this find with his partner, Maltby, a wormy guy whose uncle was the other half of the original Lotus Foods. It's tradition in the pet food industry to pass your business on to your nephews, you know. It's true. Well, okay, it's not, but it's the best explanation I can come up with for why these two schlubs ended up in charge of the company. In any event, the two of them have no qualms whatsoever about the whole digging up dead bodies and chopping them into cat food thing, so they agree to go into business as equal partners.

McBride, the CEO of Lotus Cat Foods (who is also well-versed in the Book of Wormy), pays a visit to Professor Mikoff, an oddly-mustachioed scientist who specializes in the field of science. Mikoff, who is played by none other than Ted V. Mikels himself, is engaged in an experiment which, I swear to the cat-gods, consists of watching dials and listening on headphones while an annoying fake animatronic bird tweets "Mary Had a Little Lamb." I've seen some movie scientists study some odd things in my time, but no matter how hard I try, I just can't figure out why in the sweet name of fuck anyone would want to study a fake bird that would go for $5.99 at the Christmas Tree Shoppe tweeting "Mary Had a Little Lamb." What benefit could this possibly have to mankind? That sort of experiment can't even pass off as pointless. It's too elaborately weird. Ted V. Mikels must have had some sort of point in mind when he put this scene together. Are we supposed to think the bird is real? If so, has the professor taught it to sing "Mary Had a Little Lamb," or are we supposed to ignore the tune and assume he is just studying the pitch and meaning of a bird's calls? Because I'm only willing to stretch my imagination so far, and I basically hit my limit back at the cat-people. Anyway, McBride asks Mikoff to contribute some capital to help Lotus get going again. Mikoff answers every question with doubts and qualms, which McBride interprets as yes, which is good since that is apparently how the professor intended them. Much confusion is felt by all. 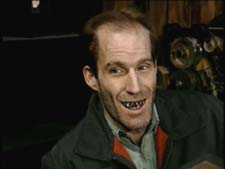 Who could say no to that face?

Now that they have their capital, Landau and Maltby get to work. The first thing they do is hire some qualified employees, by which I mean some homeless bums they find getting drunk on the street. They're ugly, totally unqualified, and have serious hygiene issues, but they'll work cheap, so they are all hired on the spot. I'm sure they all have names, but the only important one is Tim, an old man who is hired to be the building's caretaker and to watch over the cats that Landau and Maltby have around for some reason. He may not be wearing gigantic ears or a stupid dog mask, but Tim sacrifices just as much of whatever dignity he had to begin with as anyone else in this cast. He spends the entire movie singing and babytalking to a bunch of cats and simpering in front of any actual humans he has to interact with. It's just sad to see a fully grown man acting like a baby nonstop for an entire movie. It makes that thing rise in the back of my throat. You know... that thing... what's it called? Ah yes, the urge to kill. 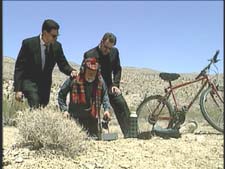 "The jig is up, professor. We know none of your science boxes actually do anything. Grab your thermos and let's go."

Professor Mikoff is out for a bike ride when he happens to be in precisely the right place in precisely the right time to be the only person to witness the cat-people's ship landing. Actually, what he witnesses is one of the worst CG crimes against humanity since "Cool World," but he recognizes it as an alien spacecraft because, you know, he wrote the movie. Luckily, he just happens to have his a full compliment of Acme Science Stuff with him, so he sets up an impromptu observatory to monitor the spacecraft. He doesn't seem any more excited about the alien ship landing than he does about, say, his freakish pointed moustache. He just plops himself down and starts watching. He's only there for a moment, though, before he is grabbed from behind by two men in black suits, who order him to accompany them. They take him the the headquarters of ASTAPP, the agency for Awareness Suppression To Avoid Public Panic. Mikoff, it seems, once worked for ASTAPP, and now they want to know what he knows about this alien spaceship. When he is brought before a table full of ASTAPP officials, Mikoff tells them that he saw a being exit the ship. He didn't actually, but whatever. The ASTAPP committee thanks him for telling them all he knows, which he didn't, but whatever. I mean, he didn't tell them what the being he supposedly saw looked like, or anything about the ship's landing which only he saw, or anything like that. This is clearly one of the government's top organization.

At the local hospital, nurse Angie complains to her boyfriend, Doctor Howard Glass that their cat, Kitty, won't eat her food. She proves this by giving the cat some food, which it doesn't eat. Yes, that's right, she feeds her cat right on the floor of the fucking hospital. On behalf of medical patients everywhere: buh? What hospital in the world would ever allow the staff to bring their goddamn pets into work. Angie has the cat slung over her shoulder as she walks down the halls, and this is a mangy, scruffy beast we're talking about, here. You can't bring a cat into a freaking video store without breaking a health code, I somehow doubt they're okay in hospitals. In any case, Angie pampers her cat with so much affection that you have to stop and wonder just how useless of a human being she must be to pay that much attention to the cat and not notice how badly it needs to be brushed. Howard is a whiny asshole who first gets moody because he thinks Angie pays more attention to the cat than to him, then gets moody because she won't screw him right there on the hospital floor. A real couple of winners, right here.