Hydrogen: My God, it's like Fraternity Vacation on the high seas, except everyone is Wendell.

Trillaphon: I do appreciate a horror movie that wastes 0 time establishing its victims as annoying as fuck, so you can really savor their deaths.

Hydrogen: Not as annoying as the fucking cat. I mean, clearly Greydon Clark somehow managed to get ahold of an actual living cat, couldn't he have recorded it making more than three sounds?

Trillaphon: You just can't appreciate the hip, deconstructionist vibe that DJ Meow Mix brings to the Uninvited soundtrack. You haven't really lived until you've seen him live. He has four double-decker synths that all only play the same 2 cat sounds, and his set is 3 hours long. It's pure genius.

Hydrogen: My favorite part of trainwreck movies like this is watching all of the little details get repeatedly fucked up. Like the cat trying as hard as it can to flee the movie while she's delivering her dumb lines.

Hydrogen: Wait, so a sextant can also be used as a high-power microscope? Did he find a Sharper Image onboard or what?

Trillaphon: The real question is, how'd that get that much hair in his bloodstream and survive? Has he been shooting heroin with Chewbacca in a Denny's bathroom all night? 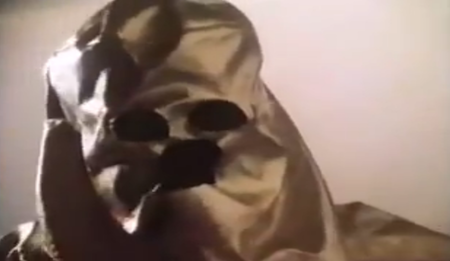 THE GRAND HIGH BOO DIDDLY DEMANDS AN EXPLANATION FOR THIS BULLSHITTrillaphon: Actually, I'm pretty sure his doctorate is just in pathological lying, because all of the medical stuff he comes up with sounds like the kind of bullshit you'd hear from a pair of skydiving siamese-twin surgeons with inoperable hair cancer on some shitty daytime Soap.

Hydrogen: Well, he did just somehow diagnose a blood disease with a sextant, which makes Jonas Salk look like Patch fucking Adams by comparison.

Trillaphon: "Well, I'm afraid that according to this compass, you have AIDS."

Hydrogen: "Now, I might be holding this telescope backwards, but I'm 99% sure that you have feline lupus."

Trillaphon: "...And if I'm reading this crumpled up naval chart correctly - which I do believe I am - you're going to die of streptococcal balanitis and have the laziest sea-burial in human history."