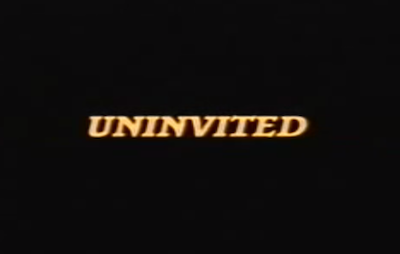 Directed By: Greydon "I made Final Justice and somehow convinced someone to let me behind a camera again" Clark, 1988

The Case Against: Even a marathon 90 minute e-meter auditing session would be less of an idiotic waste of time than watching this movie. Also, this is basically the feline equivalent of the movie Dogs (except there's only 1 cat, because cats are dicks).

Trillaphon: So, which of the dozen shit movies all called Uninvited is this again?

Hydrogen: This is the one with the radioactive murder cat. Also known as 'the worst one'. I've never seen even a screen capture from any of those other Uninviteds, but I can still 100% guarantee this is the worst.

Trillaphon: Well, for all you cat lovers out there, this movie is a great chance to kick back and watch a cat sit next to a box of waffle mix, and then go back to wishing you were watching your actual dumb cat doing actual dumb cat stuff instead of the partially-melted Gremlin muppet on a stick dismembering frat boys for the remaining 90 minutes.

Hydrogen: If instead of watching cats exist you enjoy acting, entertainment, or basic human dignity, then you will probably not enjoy delightful scenes like this one:

Hydrogen: There's really no better way to open a scene than staring at some mouthbreather's ankles while he pets a cat for 30 goddamn seconds. While saying "good kitty" over and over, to make sure the audience doesn't get confused and think he's petting a wolverine and not, in fact, a cat.

Trillaphon: Is it just me, or does evil mode cat look like the muppet that lives between Jabba the Hutt's fat rolls and giggles annoyingly at people as they're about to die after a 72 hour meth binge?

Hydrogen: I'm getting more of a howler monkey/primeval jungle wombat kind of vibe. One thing is for sure: it will kill the fuck out of you unless you give it cream and pet it constantly.

Trillaphon: Or if you jack its favorite pickup truck, apparently.

Hydrogen: What's even more confusing is that although half of the time the cat seems to enjoy murdering anyone it comes across, the other half it's killing rapists and thieves in the name of street justice.

Hydrogen: Catman: he lurks in the night, hungry...

Trillaphon: Hungry for cream...and for justice. 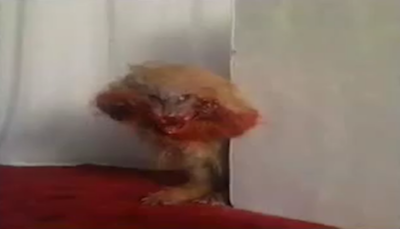 My cat is sick.